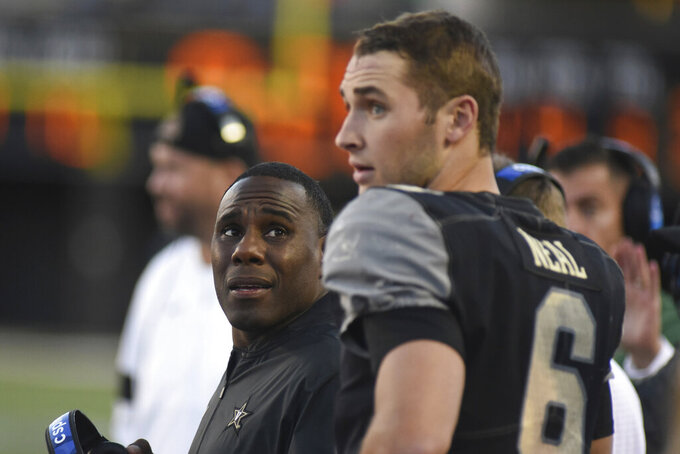 NASHVILLE, Tenn. (AP) — Derek Mason's solution with Vanderbilt mired in a horrendous start and coming off arguably the worst loss of his six seasons is work harder and stick together.

The coach is confident he and his staff can turn things around.

Mason, 25-43 in his tenure at Vanderbilt and just 1-5 this season, said Tuesday he wants the Commodores to trust their training and stick with the process heading into Saturday's matchup at home against No. 22 Missouri.

"Grab an oar and start rowing because that's the only way you're going to get there, and that's what this team needs OK?" Mason said. "We need to continue to invest in the answers that are inside the building because the schemes, I mean they're good schemes. I think we got good players, I think we got good coaches. Now what we got to do is play good football. That's the answer."

Vanderbilt is coming off a 34-14 loss to UNLV despite being a 15 1/2-point favorite last weekend. That's why Mason said the quarterback job is up for grabs between Riley Neal and Deuce Wallace, though both played in the loss to UNLV. Neal was 11 of 25 for 104 yards and an interception, while Wallace was 5 of 16 for 36 yards.

That loss has made Mason's job security a major question even though he just received a contract extension in February after athletic director Malcolm Turner started on the job Feb. 1. Defensive lineman Drew Birchmeier said the UNLV loss was frustrating but agreed with Mason that the Commodores just need to keep working.

"There's a lot of coaches in the stands," Birchmeier said.

Mason also encouraged Vanderbilt fans to support the Commodores, remembering the players are men between the ages of 18 and 22 trying to figure things out. Asked about a coaching change, Mason said he believes in his coaches and compared making a change to being in battle and shooting someone beside you.

Gerry Gdowski is in his first season as offensive coordinator for Vanderbilt, which is last in the Southeastern Conference in total offense and points scored per game, averaging 338.83 yards and just 18 points. The Commodores are 119th out of 130 FBS in scoring per game.

On defense, they rank No. 124 in total defense, giving up 482.7 yards a game with defensive coordinator Jason Tarver in his second season.

Mason said the Commodores' issues revolve around practicing well but not following through in games.