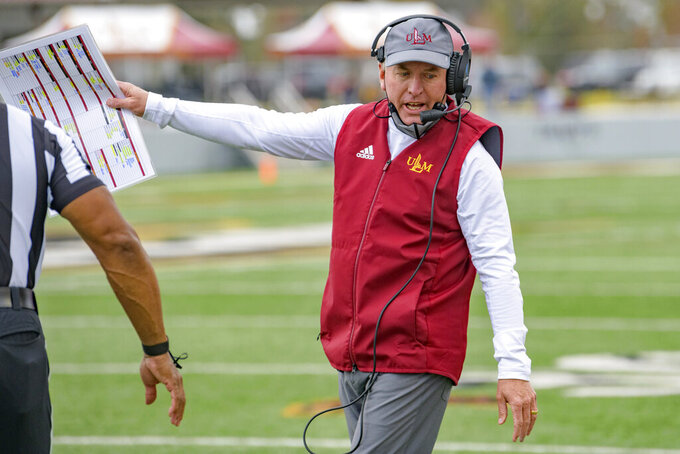 Louisiana-Monroe head coach Matt Viator reacts to a call in the first half of an NCAA college football game against Louisiana-Lafayette in Monroe, La., Saturday, Nov. 28, 2020. (AP Photo/Matthew Hinton)

MONROE, La. (AP) — Louisiana-Monroe coach Matt Viator is leaving the program with one game left in what has been a winless season.

Athletics Director Scott McDonald said Monday that he and Viator, who has a 19-39 record at ULM, “mutually agreed” on the move.

“I met at length with Coach Viator,” McDonald said. “We arrived at the decision that as a program, it was time to seek new leadership.

“I appreciate everything he’s done while attempting to rebuild this football program, especially under the extraordinary challenges presented to him and his staff this season,” McDonald added.

The Warhawks, who are 0-10, have dealt with numerous player absences during the COVID-19 pandemic. They have one game left on Dec. 17 at Troy. Defensive coordinator Scott Stocker has been named interim coach for that game.

McDonald said the team would begin searching for a new coach right away.

Viator came to ULM after a largely successful decade as coach of McNeese State of the Football Championship Subdivision.

“I want to thank ULM for giving me the incredible opportunity to be a FBS head coach,” Viator said. “I’m grateful for all of the student-athletes that I’ve had the opportunity to coach over the last five seasons."