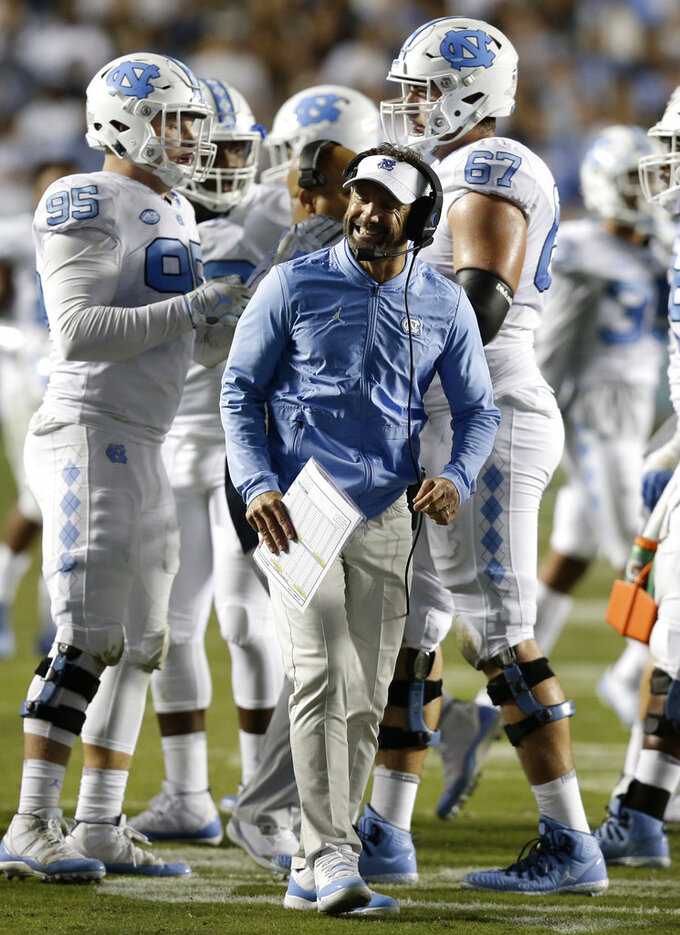 That's the approach Virginia is taking into Saturday's meeting with North Carolina (1-5, 1-3 Atlantic Coast Conference). On paper, the Tar Heels are the weakest team in the conference, but also one whose talent has been evident in some gut-wrenching losses.

"The word 'trap' game hasn't come up, but ... we're not overlooking them," quarterback Bryce Perkins said. "We know they're a good team, a solid team. They lost two close games to Virginia Tech and Syracuse."

Two weeks ago against Virginia Tech, the Tar Heels had a series of mistakes before giving up the go-ahead touchdown in the final minute after being in control for nearly all of the game. North Carolina squandered a late lead last week against Syracuse and missed on a pair of plays — a field goal to make it a two-possession game and a third-down short pass that would've put them in near kneel-down mode — in what became a double-overtime loss.

Coach Bronco Mendenhall wants his team to continue to have a one-game focus, particularly with a few milestones looming on the horizon that could leech over into distraction territory.

"It's dangerous up until the point you turn on the film and see them," Mendenhall said of any potential for over-confidence. "Then it's like, 'Oh, they're very skilled. The schemes are good. The players are good. ... I don't think there will be any issue whatsoever."

North Carolina also has won its last four visits to Scott Stadium, last losing there in 2008.

"They know we're close," Fedora said this week. "And what I worry about more than anything is somebody waiting for someone else to make that play. It needs to be: it's going to be me that makes this play."

Here are some other things to watch when North Carolina visits Virginia:

Virginia expects to have tailback Jordan Ellis, who hurt an ankle in a victory against Duke, but has also started turning to others to augment the offense. Speedy Joe Reed caught a pair of passes for 37 yards against the Blue Devils, and sure-handed tight end Evan Butts grabbed a 16-yard pass for the game-clinching touchdown.

There's no questioning the talent for North Carolina tailback Michael Carter. It's his ability to hang onto the football. Carter had a huge day (165 yards) against Virginia Tech that was overshadowed when he fumbled at the goal line instead of scoring what could've been a clinching touchdown. He fumbled again last week at Syracuse and didn't make it back on the field again. "Michael will get it corrected, he'll get it corrected," coach Larry Fedora said. "He's a good football player and I promise you it hurts him more than it hurts anybody else out there."

Virginia's crowd was still 19,000 below capacity for the Miami game two weeks ago, but was far more engaged throughout than most in recent memory and even rushed the field when it was over. The players clearly noticed and would surely get a boost from a similar scenario, not always a sure-thing for a game that starts at 12:20 p.m. It's the first of three consecutive home games for the Cavaliers, with Pittsburgh and Liberty still to visit.

The Cavaliers have been solid defensively at home, allowing just five field goals and one touchdown in three games, but North Carolina has been finding a rhythm, too. The Tar Heels had 522 yards in the loss to Virginia Tech and 500 more against Syracuse, but converted just four of their last 12 trips inside the red zone into touchdowns.

Dazz Newsome had seven catches for 90 yards and a touchdown against Syracuse along with a 75-yard punt return for a score. That came a week after he dropped a sure 85-yard touchdown on a perfectly thrown ball. "Dazz didn't want to drop that ball, but he did and ... he prepared himself to have a big game — and he did."