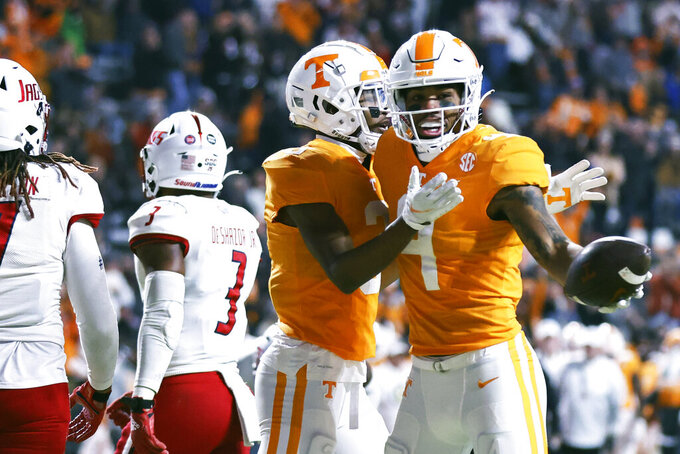 KNOXVILLE, Tenn. (AP) — Josh Heupel took over a Tennessee program depleted by transfers and rocked by an alleged recruiting scandal with one goal in mind: Getting buy-in.

“A lot of coaches will tell you, when they go into a new program, the older guys are the toughest to get to buy in because they feel they’re on the back end of their careers,” Heupel said. “To me, that hasn’t been the case. (Our seniors faced) adversity and (ran) into it, never losing faith.”

Those seniors will be honored Saturday when the Volunteers (6-5, 3-4 Southeastern Conference) host in-state rival Vanderbilt and the Commodores' own first-year coach in Clark Lea. It won't be their last game because Tennessee already is eligible for the program's 54th bowl in program history.

Heupel has turned a Tennessee offense that was a bottom-feeder in total offense ranked 102nd nationally averaging 346 yards a game and even worse scoring 21.5 points a game (108th) to one of the best. His Vols rank among the nation's best at 15th in total offense with 460.6 and 11th scoring 38.3.

Tennessee is coming off a 60-14 rout of South Alabama. Heupel credits that improvement directly to how key Vols bought into what he was teaching.

Vanderbilt has won five of the last nine in this rivalry between schools separated by 190 miles. But Lea brings his Commodores (2-9, 0-7) in trying to snap a 20-game skid inside the SEC. Tennessee has won the last two.

The Commodores are coming off a 31-17 loss to then-No. 10 Mississippi, and Lea, a Nashville native who played at Vanderbilt and in this series, says this is an emotional game that means a lot to him personally and to the team.

“We’ve been proud of how our programs performed in this game in the recent past,” Lea said. “But I think still there’s an element of of this year that that our focus is on us.”

Vols quarterback Hendon Hooker has thrown a touchdown pass in 10 straight games, sixth-best in Tennessee history. He’s chasing Erik Ainge (2004-05) and Peyton Manning (1996) who are tied for fourth with 11. Heath Shuler (1992-94) is No. 1 with 18. Hooker is fourth nationally with a 183.42 rating, and he's thrown 22 passes with only two interceptions in nine games as the starter.

Vanderbilt quarterback Mike Wright will start his second straight and fourth game overall after leading the Commodores to their best offensive performance this season. They rolled up a season-high 454 yards on 93 plays against Ole Miss, and Wright threw for 241 yards. He also ran for 61 yards. Vanderbilt topped 200 yards both rushing and passing.

Ken Seals had surgery for a hand injury and will be available.

Tennessee returner and receiver Velus Jones had quite a day last week against South Alabama. Jones had 103 receiving yards on six catches, a kickoff return for a 96-yard TD and three punt returns for 47 yards,

“I have been truly blessed,” said Jones, a transfer from Southern California. “All of my coaches believing in me, putting me in a position to be successful in any way I can help my team.”

The Vols had 13 tackles for loss against South Alabama, giving them 89 for the season. They currently are tied for second nationally with Miami (Ohio) trailing only Oklahoma State (93).

Vanderbilt ranks 17th nationally and second in the SEC with 13 interceptions. The Commodores have at least one interception in eight straight games thanks to linebacker Ethan Barr's pick against Ole Miss. They also held Ole Miss to its second lowest rushing and total yards on offense this season.