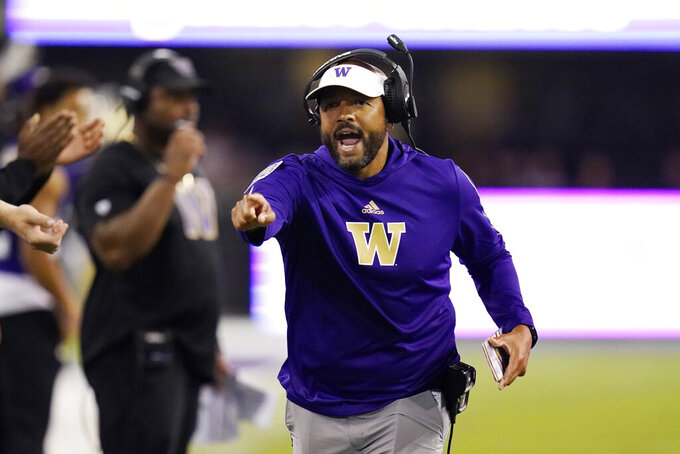 FILE - Washington head coach Jimmy Lake yells toward the field in the first half of an NCAA college football game against California, Saturday, Sept. 25, 2021, in Seattle. On Sunday, Nov. 14, 2021, Washington fired Lake less than two years after he was chosen to succeed Chris Petersen. (AP Photo/Elaine Thompson, File)

SEATTLE (AP) — When Chris Petersen suddenly decided to step away as football coach at Washington in the days after the 2019 Apple Cup, athletic director Jen Cohen believed the best replacement for the Huskies was already on staff.

No search firms were needed. Jimmy Lake was her chosen successor for Petersen.

And after less than two seasons, he's no longer the coach at Washington.

“I recognize that terminating a coach after 13 games is unusual and quite frankly it certainly goes against my belief as an administrator,” Cohen said. “However, when I know something is not working or something just isn’t right, I do have an obligation to act.”

Lake was fired by Washington on Sunday, unceremoniously cast aside amid a wave of missteps and backlash in just his second season on the job.

Lake’s firing concluded a stunningly fast fall with a team that began the season ranked in the AP Top 25 and stumbled through embarrassing losses that raised discontent in the fan base. Washington is 4-6 and needs wins in its final two games to become bowl eligible. The Huskies opted not to play in a bowl game last season due to COVID-19 issues. The last time Washington failed to qualify for a bowl game was 2009.

Cohen said the school will honor the terms of Lake's contract, which puts Washington on the hook for more than $9 million. Lake went 7-6 in the 13 games he coached.

“I evaluated the football program like I evaluate every program at Washington, holistically,” Cohen said. “So you go back to the looking at opportunities for student athletes both on and off the field, recruiting, leadership. It was just a combination of things that I came to the conclusion that I just didn’t have confidence in coach Lake's ability to continue to lead the program moving forward.”

A coaching change for Washington seemed to be building from the start of the season but accelerated in the past two weeks.

Lake was suspended without pay for Saturday’s 35-30 loss to Arizona State after a sideline incident the previous week against Oregon, when Lake swatted at and then shoved one of his players. The incident only added to the heat on Lake and the suspension seemed a precursor to an eventual separation.

Cohen said the suspension was separate from her decision to fire Lake, which she said was made in the past few days.

The Cougars also are being led by an interim coach after letting go of Nick Rolovich for failing to comply with the state’s COVID-19 vaccine mandate. Washington State (5-5) is 1-2 since Rolovich was fired — also less than two seasons into his tenure like Lake — and defensive coordinator Jake Dickert took over.

Washington went 3-1 during a truncated 2020 season that was cut short after a COVID-19 outbreak within the program caused the Huskies to cancel their game against Oregon, miss out on a spot in the Pac-12 championship game and decline a bowl invitation.

Washington entered this season with high expectations and was ranked No. 20 in the preseason poll. But the Huskies were beaten at home by FCS powerhouse Montana 13-7 to open the season and suffered a 31-10 beating at Michigan in Week 2.

The two losses created a hole that Lake could not climb out of and a growing weight of fan anger with each passing week, even when the Huskies won.

The final straw was Washington’s 26-16 loss to No. 5 Oregon on Nov. 6, when Lake had a sideline incident with one of his players. Lake swatted his right arm toward Ruperake Fuavai during a brief skirmish on the Washington sideline and then shoved his player as he walked away. Fuavai appeared to be exchanging words with Oregon’s Jaylon Redd.

The sideline moment led to his suspension, but it was also another misstep on a growing list that included Lake starting a rivalry week by taking a shot at the academics of Oregon while talking about recruiting.

Washington was the first head coaching job for Lake, who had grown into one of the most coveted assistants in the country while working for Petersen.

Lake turned down overtures from Alabama and other major programs to remain at Washington, and when Petersen surprisingly stepped down after the 2019 regular season, the Huskies turned to what seemed the obvious choice.

“As the director of athletics the hire is on me and I own it,” Cohen said.

Lake received a five-year contract worth a guaranteed $16 million. But he made multiple missteps along the way, most glaring the decision to hire John Donovan as his offensive coordinator. Donovan’s lack of success at previous stops did little to inspire belief that Washington would be any different and he was fired the day after the loss to Oregon with the Huskies ranked in the bottom third nationally in several offensive categories.

Lake came to Washington when Petersen made the move from Boise State in 2014. Lake was named co-defensive coordinator for the Huskies in 2016.

Before his time at Washington, Lake worked at Eastern Washington, Montana State and Boise State at the college level, and for Tampa Bay and Detroit in the NFL.

“I’m just disappointed and just really sad that this has not worked out,” Cohen said.