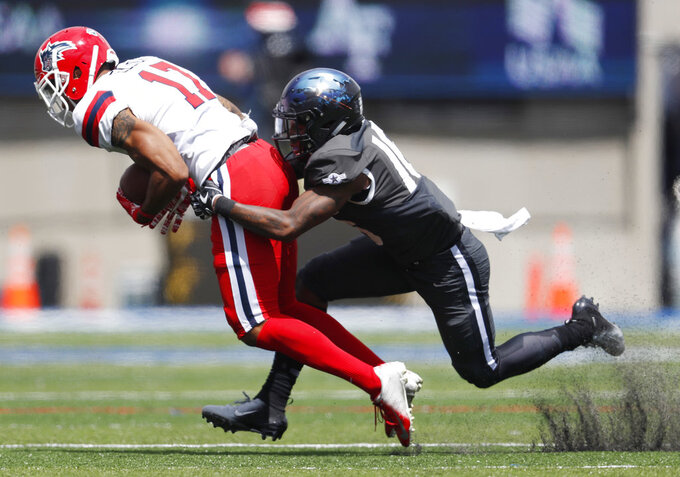 AIR FORCE ACADEMY, Colo. (AP) — Linebacker Kyle Johnson's early pick got the ball rolling for the defense.
After that, Stony Brook went nowhere.
Johnson returned an interception 32 yards for a score as a stingy Air Force defense limited Stony Brook's offense to 75 total yards, helping the Falcons to a 38-0 win on Saturday during a game delayed twice by lightning.
It was the second-fewest yards ever by an opponent against Air Force in the Academy's history. The record low was 66 from San Diego in 1956.
"Last year we weren't always where we wanted to be," Johnson said. "We made some changes and it paid off. You can see that based on stats, based on the attitudes and the fun we're having on the field."
Air Force (1-0) and Stony Brook (0-1) weathered 76 minutes in delays during the second quarter as they shuttled back and forth to the locker room. That led to the decision to play right through halftime without another break.
Arion Worthman, Cole Fagan, Isaiah Sanders and Donald Hammond III all ran for a touchdown as the Falcons improved to 23-0 all-time against teams in the Football Championship Subdivision.
The defense played a starring role by holding Stony Brook to four first downs and never allowing QB Joe Carbone to get on track. He completed 5 of 16 passes for 30 yards. He also had Johnson step in front of a pass and take it back to make it 14-0 just 5:19 into the game.
Johnson actually scored a TD in practice during the week. But that came on a punt block and to celebrate he flipped the ball over the goal post. He wasn't about to do that in a game.
"I knew what I was going to do," he said. "I ran to the end zone, threw the ball down, unbuckled my helmet and stared at the camera."
Stony Brook rolled the dice early in the game with a fake field-goal attempt, but it backfired. Stony Brook also missed a 45-yard field-goal attempt.
"Not getting an early score when we had those opportunities, it hurt us," Stony Brook coach Chuck Priore said. "And I'm going to give credit to them. They played hard."
It was the first meeting between Air Force and Stony Brook, which was picked to finish fourth in the Colonial Athletic Association. A season ago, the Seawolves held a fourth-quarter lead against a ranked South Florida team before falling 31-17.
This one was never in doubt.
"We got punched in the mouth in the first quarter," Stony Brook linebacker Noah McGinty said. "I think it was a wake-up call for us. We just have to respond to adversity."
The second quarter was a drawn-out affair as lightning moved into the area. The teams retreated into the locker room midway through the quarter for a 38-minute delay. After a handful of plays, including a 16-yard TD run by Fagan, the officials sent the teams back into the locker room under the threat of more lightning.
Quite a few of the fans at Falcon Stadium headed to the parking lot during the first delay and didn't return.
THE TAKEAWAY
Stony Brook: The team drops to 7-5 all-time against the United States Military Academies. The Seawolves knocked off Army 23-3 in 2012. They're also 3-0 against the Coast Guard Academy and 3-4 versus the Merchant Marine Academy.
Air Force: Another home opener, another win for coach Troy Calhoun. The Falcons are 12-0 in season openers since Calhoun took over, winning by a combined margin of 580-129.
CUSHY DELAY
The renovated Air Force locker room came in handy for the delays.
"Definitely a lot more room to operate, stretch out and stay loose," Worthman said.
HARSHEST CRITIC
Worthman wasn't pleased with his performance. He rushed for 66 yards and fumbled. He also was 2 of 8 for 29 yards through the air.
"In all facets, my reads, checks, ball security — subpar," Worthman said.
UP NEXT
Stony Brook: Host Bryant on Saturday.
Air Force: Travel to Florida Atlantic on Saturday — and, being from Florida, defensive lineman Jordan Jackson may need extra tickets. "I was in my room when (the schedule) came out," he said. "I called my mom right away and asked, 'What are we going to do to get everyone there?'"
___
For more AP college football coverage: https://apnews.com/tag/Collegefootball and https://twitter.com/AP_Top25