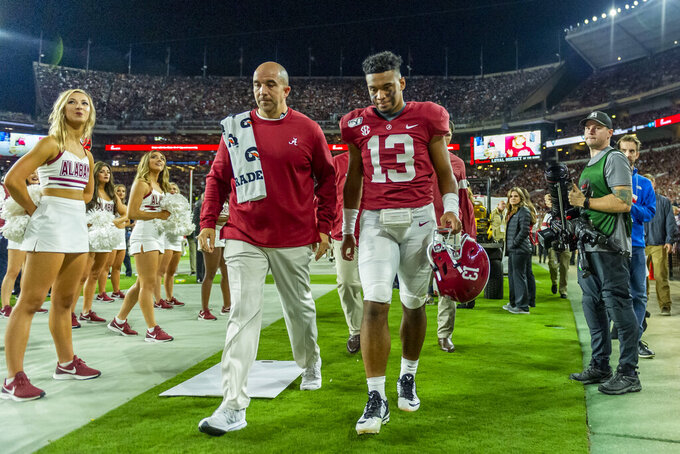 Alabama quarterback Tua Tagovailoa (13) walks off the field hurt against Tennessee during the first half of an NCAA college football game, Saturday, Oct. 19, 2019, in Tuscaloosa, Ala. (AP Photo/Vasha Hunt) 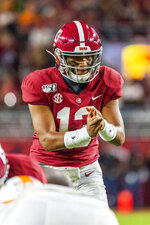 TUSCALOOSA, Ala. (AP) — Alabama quarterback Tua Tagovailoa left in the first half against Tennessee with a left ankle injury and is expected to miss at least one game.

Tagovailoa walked off the field and was taken to the sideline medical tent during the second quarter Saturday night. The 2018 Heisman Trophy runner-up then was escorted to the locker room while Mac Jones took his place.

No. 1 Alabama's coach Nick Saban says Tagovailoa is likely to miss the Arkansas game with the injury. Tennessee quarterback Brian Maurer also was hurt in the first half, sustaining a concussion.

Tagovailoa called a timeout just before the play clock ran out after a sack and walked to the sideline.

He was 11 of 12 for 155 before the injury. Tagovailoa did throw an interception on first-and-goal from the 2 when he tried to force the ball while scrambling.