Analysis: At midseason, No. 1 Georgia a rock amid the upsets 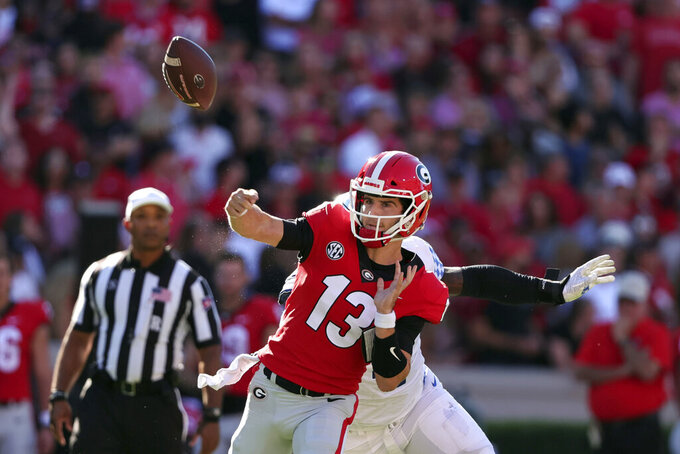 There is no defensive revolution in college football this season.

The dominant defense of the top-ranked Bulldogs has been one of the biggest storylines in the first half of a season that has been highlighted by upsets and unpredictability. Simply, 2021 has been all sorts of fun after the pandemic-altered season in 2020.

Every team that made the previous College Football Playoff (Alabama, Ohio State, Notre Dame and Clemson) had lost by the end of Week 6, the earliest that's happened in the CFP era. Clemson lost twice in September and fell out of the rankings for the first time in seven years.

Georgia, meanwhile, is rolling along behind that defense.

Georgia is allowing 3.55 yard per play, which would be the fewest for a full season since Alabama in 2011 (3.32). Georgia coach Kirby Smart was the defensive coordinator for the Crimson Tide back then. The Bulldogs are allowing 6.6 points per game, which would be the lowest since Oklahoma in 1986 (6.6).

This doesn't appear to be trend outside of Athens.

The secret to Georgia's success?

“I love the way they compete game in and game out,” Smart said of his defense on ESPN's “College GameDay” last Saturday. “They love to play the game. They love each other.”

Defensive tackle Jordan Davis, a 6-foot-6, 340-pound wrecking ball, and linebacker Nakobe Dean are the most notable stars. Both were voted to the AP midseason All-America team.

Time to hand out some more midseason awards and take a peak at what might lie ahead.

Both Big Ten Michigan teams won only two games during an abbreviated 2020 season. At Michigan, coach Jim Harbaugh put himself on the hot seat by taking a pay cut. At Michigan State, second-year coach Mel Tucker looked to have a lengthy rebuild ahead.

The No. 6 Wolverines and No. 9 Spartans enter the second half of the season a combined 13-0.

Thing are about to get real in the Big Ten East. Michigan, Michigan State, No. 6 Ohio State and No. 7 Penn State will start a round-robin on Oct. 30. Disappointing endings could be ahead for all, but the winner of Michigan-Michigan State looks well positioned to finish no worse than 9-3.

Listen, it's not Mack Brown's fault North Carolina was a preseason top-10 team.

“My expectation is to win every game, so three times we’ve met it and three times we haven’t," Brown said the Tar Heels' lost to Florida State earlier this month. “The national media expectation, the expectation for us to be a top 10 team, were wrong. So I guess we should all be critical of the media for picking us that high.”

Brown has a point. Hyping a team that went 8-4 last season and had to replace two NFL running backs was a stretch. But North Carolina (4-3) has already lost three games to mediocre Atlantic Coast Conference teams, which makes the Tar Heels a mediocre ACC team. Even the most cautious UNC fans did not see that coming.

Expectations were sky high and one slip up is all that it would have taken for the Bearcats' hopes of a dream season to vanish.

Fickell has done a nice job of getting his team to embrace the big goals while focusing on the small ones. The defense has not missed a step after losing coordinator Marcus Freeman to Notre Dame. Getting quarterback coach Gino Guidugli more involved in the play calling seems to have given the offense a boost.

The race appears to be wide open and, as usual, big games down the stretch of the season are likely to swing the voting one way or the other.

That creates an advantage for teams in the mix for the playoff and their quarterbacks. That potentially sets up well for Ohio State's C.J. Stroud and Alabama's Bryce Young.

At the midway point here's an unconventional Heisman five:

Drake London, WR, USC. A reason to watch the Trojans.

Kenny Pickett, QB, Pittsburgh. In the season of the super senior, he has been the best.

Bijan Robinson, RB, Texas. The best running back in the country.

The Aggies are good and were playing at home, but they scored almost as many points against the Crimson Tide as they had in their three previous games against Power Five competition combined.

Honorable mentions: Purdue over No. 2 Iowa; Stanford over No. 3 Oregon; Louisiana-Monroe over 33-point favorite Liberty; North Carolina State over Clemson.

Predicting this season hasn't gone too well. Wisconsin in the CFP? DJ Uiagalelei for Heisman? On the other hand, Georgia winning the national title looks pretty good. Let's give this one more try: