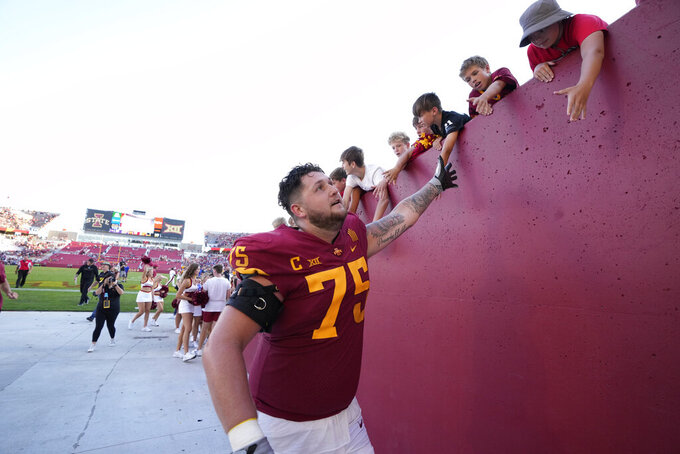 AMES, Iowa (AP) — Sipping a beer with friends on a weekday afternoon at Wallaby's Bar and Grille, Chris Clough explained life as an Iowa State fan.

“You have to know that you’re going to see so many painful years and you just have to get over it,” he said, “and when you get those years when we're good, you have to hold onto them.”

Cyclones fans also know the other shoe could drop any time.

It did just over a month ago when the Big 12's flagship schools, Oklahoma and Texas, announced their intention to join the Southeastern Conference. The move will take place in 2025, if not sooner.

“We finally prove we can beat them,” Clough said, “and now they want to leave.”

Wins in the same year over the Sooners and Longhorns highlighted the Cyclones' greatest season. They reached the Big 12 championship game for the first time and won the Fiesta Bowl, and this year could be even better after almost every starter returned.

A record number of season tickets have been sold, the Cyclones had their highest preseason ranking at No. 7 and a sellout crowd of 61,500 saw a 16-10 win over Northern Iowa on Saturday.

While the fan base has never been more excited, Cyclone Club president Jay Chapman acknowledged last month “there's a little bit of anxiety” about the future.

Some relief came last week amid reports the eight teams left behind by OU and Texas will stay together rather than go their separate ways to look for new conference homes.

Three people familiar with the Big 12′s talks told The Associated Press on Friday the league is working to rebuild by adding four new members. BYU, an independent, and current American Athletic Conference members Central Florida, Cincinnati and Houston are the “most intriguing” candidates. One person told the AP invitations could go out this week.

With Oklahoma and Texas in the Big 12, each member received a distribution of $34.5 million for the 2020-21 fiscal year, about the same as schools in the Atlantic Coast Conference and Pac-12.

Still to be answered would be how much television money a Big 12 without Oklahoma and Texas command.

“If you’re not in a Power Five of some sort, it can change the whole landscape of the university, just from a revenue standpoint,” said Tuey Rankin, a Texas Tech player in the 1980s and now a season ticket holder.

West Virginia fans haven't bought into the excitement of playing a league member more than 1,000 miles away, so the loss of Oklahoma and Texas doesn't take away any rivalries.

Still, Josh Martin of Moundsville, West Virginia, said: ““The conference isn’t worth anything without them.”

Having Oklahoma and Texas has been good for business in the Big 12's locales.

In Ames, population 66,000, a home football weekend generates $7 million for the local hospitality industry, according to the city's chamber of commerce. That's nearly $50 million per season if there are seven home dates.

Clough, an Ames businessman and ISU football and basketball season ticket holder for 20 years, said when he heard the Big 12 flag bearers were taking off, he had the same sinking feeling as when Nebraska announced in 2010 it would leave for the Big Ten.

“Now we're going to change it again, and as a fan base it makes things more difficult,” Clough said. “You learn to create new rivalries. No doubt it’s going to be interesting how it works out.”

Rankin, the former Texas Tech player, said there's a lot of animosity toward the Longhorns. It's not so much because of their move to the SEC, he said, as much as the secretive way it unfolded.

“We’ve got all this history together as conference members," Rankin said, referring to the old Southwest Conference days. “They’re our rival, but I’m not sure we’re their rival. To just say we’re going to go do this and to heck with everybody else, I think that seems kind of selfish. I do not think ‘anger’ is too harsh a term. I think there is a lot of anger.”

For his part, sixth-year Iowa State coach Matt Campbell isn't allowing himself to worry about what the Cyclones' conference situation looks like down the road.

What does Campbell tell them?

“We win,” he said. "We’ll work to continue to win, and if you want to play for a winning team, come and play for us.”