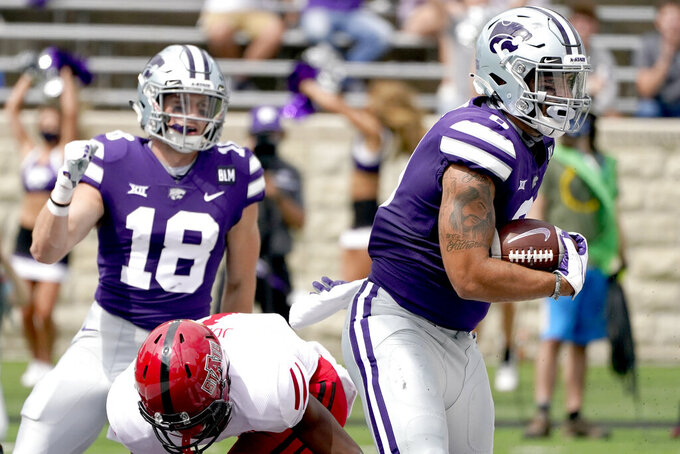 Kansas State tight end Briley Moore, right, catches a pass in the end zone to score a touchdown during the first half of an NCAA college football game against Arkansas State Saturday, Sept. 12, 2020, in Manhattan, Kan. (AP Photo/Charlie Riedel) 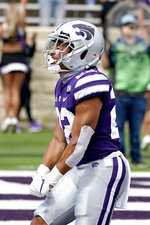 MANHATTAN, Kan. (AP) — Jonathan Adams Jr. caught a career-high three touchdown passes, including the game-winner with 38 seconds remaining, and Arkansas State defeated Kansas State 35-31 on Saturday for the Red Wolves' first win over a Power 5 opponent in a dozen years.

Layne Hatcher threw a 17-yard pass to Adams for the winning score after the Wildcats (0-1) had taken a 31-28 lead on a Blake Lynch 35-yard field goal with 2:30 remaining.

Most of the offense flowed through the 6-foot-3 Adams.

“The quarterbacks put the ball in a good spot, and I just use my athleticism to turn my hips and go get the ball and go over the corner's head and stuff like that,” said Adams, who had 98 yards receiving on eight catches.

“We were able to create some penetration, create some issues where they could not get downhill all night long,” Anderson said.

“It wasn’t the outcome that we wanted. We didn’t play particularly well. I know what the guys have gone through over the past month to five weeks trying to prepare to play, and we can’t make excuses,” said Kansas State head coach Chris Klieman.

Skylar Thompson finished with 259 yards passing and two touchdowns in the loss.

“There are three or four (passes) that I can think of that were just inches off, or I missed a throw or misjudged on a ball and just couldn’t get on the same page there a couple times,” Thompson said.

Deuce Vaughn led Kansas State in rushing with 47 yards and a touchdown, becoming the first true freshman to score for the Wildcats in a season opener since 1988.

The Wildcats scored on their first possession on a 17-yard catch by Phillip Brooks following a blocked punt. They added TDs on consecutive drives in the second quarter to lead 21-7. After being held scoreless in the third quarter, they responded with a 5-yard touchdown run by Harry Trotter, followed by Lynch's field goal.

On a double-pass play, wide receiver Jeff Foreman threw a 48-yard score to Roshauud Paul midway through the second quarter.

Early in the fourth quarter, the Red Wolves faked a punt that led to a pass interference call. On that drive, a pass off a double-reverse set up a 5-yard score to Adams from Logan Bonner for a 28-21 lead.

Arkansas State: The quick tempo and aggressive play-calling kept the Red Wolves in the game and proved to be the difference. Arkansas State kept the Wildcats' ground game in check.

Kansas State: The Wildcats failed to establish the run game and had to rely on the arm of Skylar Thompson, an uncommon offensive strategy for the Wildcats.

Kansas State will have a week off before opening Big 12 play against Oklahoma on September 26.