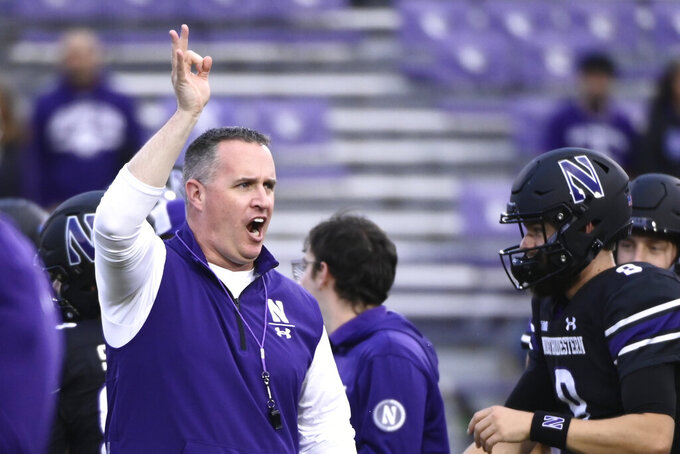 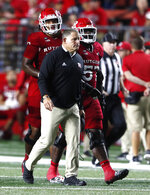 Northwestern was feeling pretty good about itself. Then, September rolled around.

The Wildcats are reeling with three straight nonconference losses after opening with a win over Nebraska in Ireland. At least they're not the Cornhuskers. Nebraska fired coach Scott Frost just over two weeks ago in the wake of an embarrassing loss to Georgia Southern.

The season hasn't exactly gone smoothly for a number of Big Ten teams eager to climb into the top tier.

While No. 3 Ohio State, No. 4 Michigan, No. 11 Penn State and No. 21. Minnesota are all 4-0 with some impressive nonconference wins, it's been a bit dicey for the rest of the Big Ten. There have been some narrow escapes and embarrassing losses.

With nonconference play wrapping up last weekend and the league schedule about to hit full throttle, it's fair to wonder if the top teams might be in for some headaches late in the year. After all, strength of schedule could come into play if they are jockeying for College Football Playoff berths and spots in New Year's Six bowls.

“More teams are beating themselves than are winning games, and I think that is what I've seen in the games that I've watched," Northwestern coach Pat Fitzgerald said. “Usually, the teams that keep grinding and improve, it kind of starts to be corrected.”

Ohio State shut down then-No. 5 Notre Dame over the final 42 minutes in a season-opening 21-10 victory. Penn State won easily at Auburn two weeks ago. Michigan tuned up for Big Ten play with a soft nonconference schedule, beating Colorado State, Hawaii and Connecticut by a combined 166-17 in home games, then held off Maryland 34-27 to start league play.

"I feel like we’re going to be great, but I can’t tell yet,” running back Blake Corum said.

Corum might get a better idea this week when the Wolverines visit Iowa. The Hawkeyes have allowed just 23 points through four games, though they've had some bumps in the early going — a narrow win over Football Championship Subdivision program South Dakota State in the opener followed by a loss to Iowa State.

Minnesota jumped into the Top 25 this week. But for the rest of the conference, it's been a bit of a tough go.

Michigan State looked terrific in beating Western Michigan and Akron. A loss at Washington knocked the Spartans out of the poll from the No. 11 spot, and they dropped their second in a row when Minnesota beat them last week.

Wisconsin, which lost at home to Washington State in nonconference play and got hammered by Ohio State last week, is looking more middle of the road.

Purdue lost to Syracuse two weeks ago and squeezed past Florida Atlantic 28-26 last week. Rutgers beat Boston College by one in the opener, but won by just two at Temple before losing to Iowa last week — ahead of a visit to Ohio State.

No one needs to remind Rutgers coach Greg Schiano of the gap with the Buckeyes. It's something he's trying to close in his second tenure leading the Scarlet Knights.

“I don’t know if there’s a measuring stick right now with a program that’s established that way,” said Schiano, Ohio State's defensive coordinator from 2016 to 2018. “I don’t know that. It depends how we play, right? It will be a great measuring stick if we play well.”

Northwestern, coming off a last-place finish in the Big Ten West after winning the division the previous year, thought it would be in a better spot after the win over Nebraska.

A loss to Duke was followed by a stunner to Southern Illinois, an FCS school. Things didn't get much better last week with Miami (Ohio) rallying for a 17-14 victory at Ryan Field, and they don't get easier this week. Not with a trip to Penn State.

Fitzgerald has won by far more games than any other Northwestern coach over 17 seasons leading his alma mater. He led the Wildcats to Big Ten West championships in 2018 and 2020, and has 10 bowl appearances during his tenure.

Fitzgerald said the September struggles are “incredibly motivating” for him and the team needs to “use the frustration as motivation.” He has “no doubt” the Wildcats can turn around their season.

“Nobody wants to be where we’re at," he said. "But we’re still 1-0 in the Big Ten. Can’t take that away from us right now. We gotta build off that.”