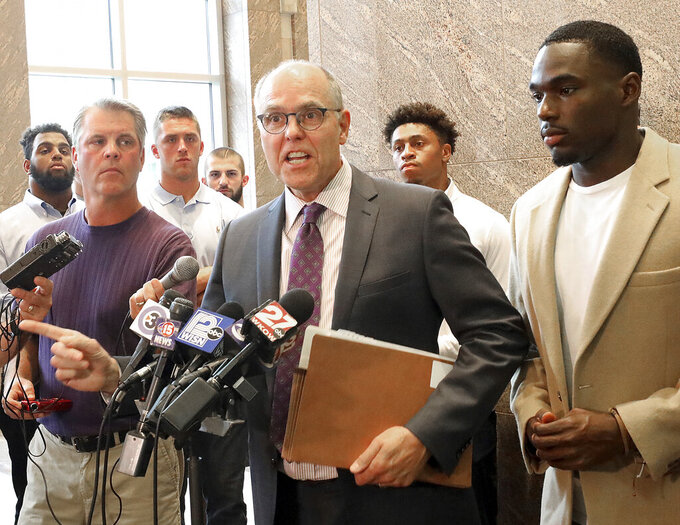 Stephen Meyer, center, attorney for former Wisconsin Badger football player Quintez Cephus, right, speaks on behalf of his client during a press conference in Madison, Wis. Monday, Aug. 12, 2019. Cephus, who was acquitted of sexual assault charges earlier this month, is requesting to be reinstated to the university which expelled him after completing their own investigation in March. (John Hart/Wisconsin State Journal via AP)

Cephus, 21, of Macon, Georgia, was suspended from the football team in August 2018 after being charged with second- and third-degree sexual assault. He was expelled from the university earlier this year for violating its nonacademic misconduct code. Cephus applied for readmission on Aug. 6, four days after a jury found him not guilty.

Cephus' attorney, Stephen Meyer, said Monday that discussions with the university have collapsed. But the university, in a statement posted on its website, said Meyer was "false" and no decision has been made.

The university is gathering all relevant court records and will review the Cephus petition "as quickly as possible" once all the information is in hand, the school said.

The university also noted that students are held to a different standard under its code of conduct and may be found in violation even if what they did isn't found to be criminal.

"State and federal law require us to apply the code of conduct impartially and consistently regardless of the identities of the individuals involved," the university said.

Meyer wouldn't give details about what happened or why he thought the university would not look favorably on the readmission request.

"They sent us a clear message that they don't want Quintez as a student at the University of Wisconsin this semester," Meyer said.

A standout wide receiver, the 6-foot-1 junior played a combined 23 games in 2016 and 2017. He amassed 501 yards receiving in the 2017 season and led the Badgers with six touchdown catches despite breaking his right leg in November of that year, missing the final five games of the season.

Badgers head football coach Paul Chryst said last week that he would love to have Cephus return to the team, if that's what's best for him. Cephus and current Badger players planned a news conference Monday to plead his case.

Seven players, including Heisman Trophy contender and running back Jonathan Taylor and quarterback Jack Coan, sent a letter supporting Cephus to UW-Madison Chancellor Rebecca Black, the Board of Regents and the UW System president urging that he be allowed back in school.

"Please do what is fair," they wrote in the letter, which Cephus' attorney released on Monday. "Clear Quintez's name and reconsider the punishment of a person, one of your students, who was found not guilty of what he was accused of."

At a news conference Monday afternoon, Meyer urged the university to follow the lead of the jury that acquitted Cephus and to not reinforce what he called the racial stereotype that black men are sexually aggressive. He said school officials need to think about how people of color will view the university's decision.

He accused the school of "slow-walking" Cephus' petition. He said his office has sent the university more than 250 pages of court documents already and the reinstatement decision should be easy.

Cephus, who was joined by about 20 of his former teammates including Taylor and Coan at the news conference, said he has no anger toward the university.

"The whole time I've had the support of my brothers and people who know me," he said in a quiet voice.

The women testified at trial that Cephus sexually assaulted them on the same night in April 2018 and they were too drunk to consent to sex. Cephus testified that the sex was consensual and was arranged by one of his accusers.

The jury deliberated for just over 30 minutes before arriving at a not-guilty verdict.

Cephus has said since the verdict that his top priority is returning to school and playing football again.

Karen Lindert, who said she hired Cephus in 2017 to work at her day care center in Oregon, Wisconsin, said she attended Monday's news conference because she wanted to support him.

She brought along a group of children from her center. They wore University of Wisconsin sports gear. One child held up a sign that read, "Touchdown Quintez Cephus! Go Badgers!"

"He's a kid who deserves a chance," Lindert said of Cephus.