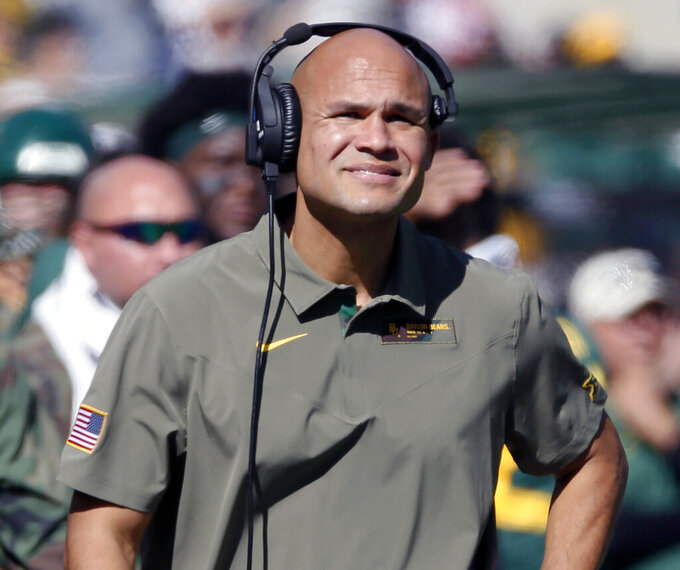 FILE - Baylor coach Dave Aranda watches from the sideline during the team's NCAA college football game against Oklahoma in Waco, Texas, Nov. 13, 2021. Aranda got 15 of the 20 votes for coach of the year in balloting for The Associated Press' All-Big 12 team and awards. (AP Photo/Ray Carlin, File)

Iowa State running back Breece Hall is The Associated Press Big 12 offensive player of the year for the second season in a row, while conference champion Baylor has the league's top defender and coach.

Baylor senior safety Jalen Pitre was named defensive player of the year and second-year Bears coach Dave Aranda was also honored in the AP All-Big 12 team and awards released Thursday, as determined by the vote of a panel of 20 sports writers and sportscasters who regularly cover the league.

Hall is the Big 12 rushing leader with 1,464 yards and 20 touchdowns this season, and has an active FBS record of 24 consecutive games with a rushing touchdown. The junior, who got 16 of the 20 votes for top offensive player, has 3,941 career rushing yards.

Texas freshman receiver Xavier Worthy, who had 62 catches and leads the Big 12 with 981 yards and 12 TDs receiving, was voted newcomer of the year. He is also a first-team All-Big 12 pick at receiver.

Aranda got 15 of the 20 votes for coach of the year. Oklahoma State's Mike Gundy, whose team lost to Baylor in the Big 12 championship game, got the other five.

Pitre, a first-team safety for the second year in a row, has 17 ½ tackles for loss and was the only player in the nation during the regular season with at least three forced fumbles, three fumble recoveries and two interceptions. Pitre got 12 of 20 votes for top defensive player while Oklahoma State linebacker Malcolm Rodriguez, with a league-high 119 tackles overall, got five votes.

The 2021 AP All-Big 12 team, as selected by a panel of 20 sports writers and sportscasters who regularly cover the league, with players listed alphabetically with name, school, height, weight, class and hometown. (“u-” denotes unanimous selection):