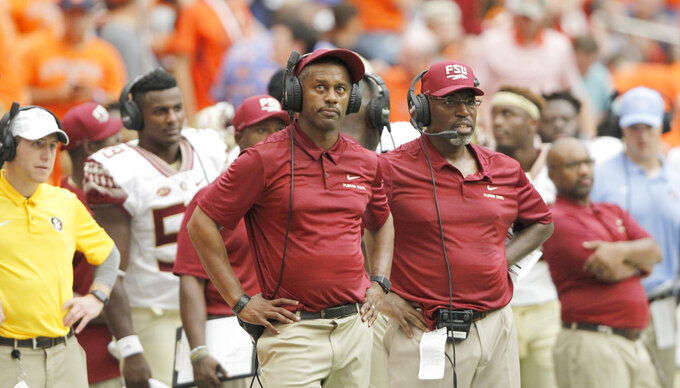 TALLAHASSEE, Fla. (AP) — Florida State has returned to practice field following a bye week and in the wake of Hurricane Michael after a rocky start under first-year football coach Willie Taggart.

Hurricane Michael forced the school to shut down during the schedule off-week for football players. Taggart cut the practice schedule short and encouraged players to evacuate. All of the players returned safely, although defensive end Janarius Robinson, a Panama City, Florida native, lost his home when Hurricane Michael's eyewall came ashore just a few miles away.

Robinson returned to the team and practiced on Tuesday. Now Florida State is preparing for Saturday's ACC matchup with Wake Forest.

"We told him we're here for him," Taggart said. "And whatever we can do to help we will."

The Seminoles, who are preparing for Saturday's ACC matchup with Wake Forest, pitched in to help storm victims when they returned to Tallahassee on Saturday. Football players were among the student-athletes who loaded up 54 trucks with 40,000 cases of water and 28,000 boxes of food to help those in need along the coast.

While some players and their families are continue to feel the impact of Hurricane Michael, the Seminoles (3-3, 1-3 ACC) were able to use the time off to rest football bumps and bruises and getting ready for the Demon Deacons (3-3, 0-2).

The Seminoles offensive line, which has been comprised of six different starting combinations due to injury, really benefited from the time off. However, Taggart said there is no timetable for tackle Landon Dickerson to return. Offensive tackle Derrick Kelly believes his leg is stronger now after missing two games and then playing as a backup in the 28-27 loss at Miami on Oct. 6. Guard Cole Minshew has been able to play through injuries to both ankles.

"It helped me a lot," Minshew said of the break. "Any time you get a little break and get to go home and go see your family, you just feel rejuvenated. You come back just ready to work."

Florida State has plenty of work to do in the second half of the season. The Seminoles are looking to extend their streak of playing in bowl games to a 36th season but also face a daunting schedule.

The last six games on Florida State's schedule are the toughest in the FBS, according to the NCAA. Florida State will face four Top 25 teams — No. 3 Clemson, No. 4 Notre Dame, No. 11 Florida and No. 16 NC State — and those programs have a combined 24-1 record.

Florida State hasn't beaten a ranked team since it knocked off No. 6 Michigan in the 2016 Orange Bowl. The road ahead won't be easy, but Taggart hopes the Seminoles learned from letting a 20-point, second-half lead slip away in a loss to then-No. 17 Miami.

"They were upset, and rightfully so, but we had to be upset with ourselves because we didn't finish," Taggart said. "A hard way to learn. But we got to take those things and make sure we practice and prepare and make sure that those things don't happen again."