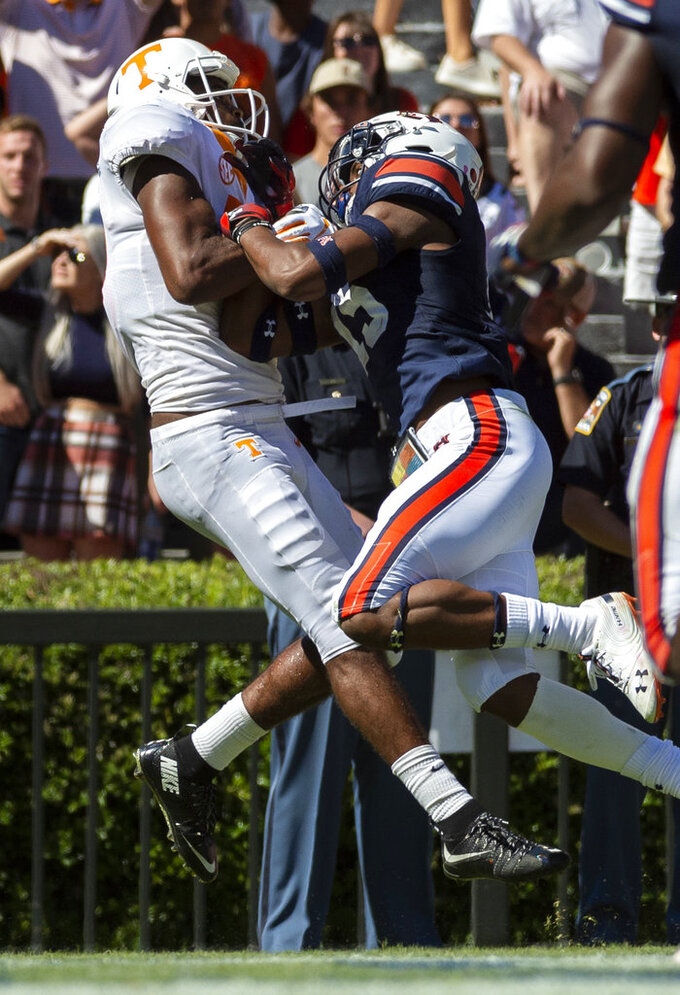 Tennessee wide receiver Jauan Jennings (15) grabs a touchdown reception as Auburn defensive back Jordyn Peters (15) fights for the ball during the second half of an NCAA college football game, Saturday, Oct. 13, 2018, in Auburn, Ala. (AP Photo/Vasha Hunt)

KNOXVILLE, Tenn. (AP) — Tennessee wide receiver Jauan Jennings has bounced back from a tumultuous year and is starting to regain the form he showed two seasons ago, when his uncanny knack for producing big plays helped the Volunteers earn a top-10 ranking.

After getting dismissed from Tennessee's team last November following a derogatory social media rant targeting the Volunteers' coaching staff, Jennings was reinstated in the spring by the current staff but spent much of the offseason recovering from a knee injury. Jennings said he's feeling better now, and he had five receptions for 71 yards and a touchdown last week in Tennessee's 30-24 upset of Auburn that snapped an 11-game Southeastern Conference losing streak.

"Just being able to be with my brothers, that's the most important thing to me," Jennings said Monday after being made available to the media for the first time since his reinstatement. "Getting that second chance to come back, it just means so much. I'm just thankful."

Jennings' statistics still don't put him on pace to match what he accomplished two seasons ago, when his touchdown catches highlighted back-to-back victories over Florida and Georgia .

The 6-foot-3 junior has 17 catches for 207 yards with two touchdowns halfway through the season. He caught 40 passes for 580 yards and seven touchdowns in 2016 before a wrist injury caused him to play just one game last fall.

But the fact he's contributing at all shows how far Jennings has come since that November afternoon when it appeared he'd never play for Tennessee again.

Brady Hoke, the Vols' interim coach at the time , kicked Jennings off the team. After Jeremy Pruitt took over as coach and Phillip Fulmer replaced John Currie as athletic director , the new staff gave Jennings an opportunity to return.

"I was hoping and praying I would get a chance," Jennings said. "My priority was not playing anywhere else. I didn't really think about going to play anywhere else."

Jennings said he's been "keeping a humble spirit and just making sure I do the little things each and every day." Pruitt raves over the example that Jennings has set for his teammates with his emotion and work ethic.

"He's done everything that I've asked him to do since I've been here," Pruitt said. "He's one of my favorite guys. The guy competes, works hard. He loves the University of Tennessee, has passion for it."

Jennings relishes these types of showcases.

Two years ago, Jennings beat Florida's Teez Tabor for a 67-yard touchdown that put Tennessee ahead for good in a 38-28 victory that ended the Vols' 11-game losing streak to the Gators. One week later, Jennings caught a 43-yard Hail Mary pass as time expired to give Tennessee a 34-31 triumph at Georgia . The comeback at Georgia capped a 5-0 start that got Tennessee as high as No. 9 in the Top 25.

Tennessee and Jennings have encountered all kinds of turmoil since then. Jennings' teammates say he's learned from what he went through last year.

"I think he's more locked in, he's more dialed in," junior receiver Marquez Callaway said. "He wants to be here, he wants to help and he wants to win."

One way Jennings has changed was evident in his conversation with reporters his week.

Jennings used to love saying whatever was on his mind. When he was asked after the Georgia game two years ago whether his Hail Mary reception was the best catch of his career, Jennings said he ranked it just below "burning Tabor" in the Florida game.

He made another big play last week by outfighting Auburn defensive back Jordyn Peters for a 25-yard reception that put Tennessee ahead for good. But when he was asked Monday where he'd rank the Auburn catch, Jennings wasn't nearly as boastful as he'd been in the past.

"It was a good catch," Jennings merely replied.

Jennings may not be talking as much, but his recent performance has made quite a statement.