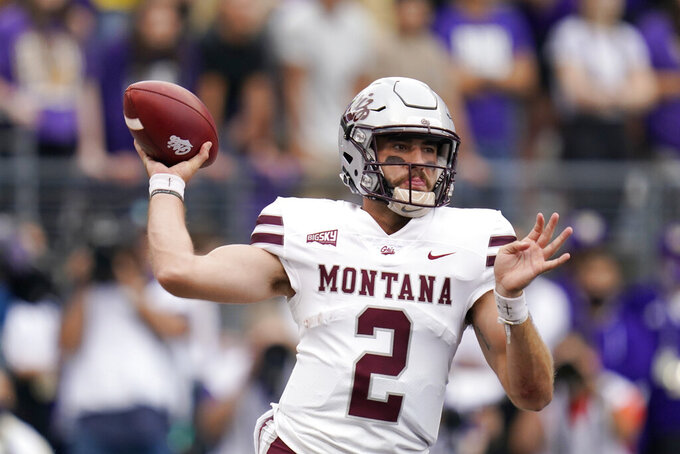 Montana quarterback Cam Humphrey drops back to pass against Washington in the first half of an NCAA college football game Saturday, Sept. 4, 2021, in Seattle. (AP Photo/Elaine Thompson)

SEATTLE (AP) — A couple of weeks before the season started, Montana coach Bobby Hauck met with university president Seth Bodnar. His message was clear: The Grizzlies were going to be really good and even might take down Washington in the opener.

“He asked me how I thought we'd do and I told him we'd win,” Hauck said.

The Grizzlies were the better of their Pac-12 foe, pulling off arguably the biggest victory in school history outside of winning two FCS national titles.

“This is the Washington Huskies. OK. This is App State over Michigan,” said Hauck, a one-time assistant at Washington.

Montana quarterback Cam Humphrey scored on a 4-yard run early in the fourth quarter, and the Grizzlies added a short field goal with 2:54 left to take a six-point lead.

Needing a touchdown to avoid the upset, Washington came up empty on its final two possessions. Dylan Morris was incomplete on fourth-and-2 with 1:33 left giving the ball back to the Grizzlies.

Montana was able to run off only 21 seconds, and Kevin Macias’ 50-yard field goal attempt was well short. Given one more chance, Washington reached the Montana 43, but Morris' pass was intercepted by Marcus Welnel with 31 seconds left and those in maroon and silver started a wild celebration.

“They played better than us tonight. We're not going to make any excuses. Credit goes to Montana,” Washington coach Jimmy Lake said.

A regular powerhouse from the FCS division, the Grizzlies frustrated Washington all night into one of the most embarrassing losses in program history. Washington had received scares in the past by FCS programs — most notably a couple of times by Eastern Washington.

Montana didn't have a 2020 season. The Grizzlies opted out of playing the Big Sky Conference schedule last spring and had just two games, one against a Division II program.

But the Grizzlies were stout defensively and opportunistic enough on offense.

Morris scored on a 1-yard keeper on Washington’s opening possession but it was otherwise an ugly performance for the offense. Morris threw a pair of costly interceptions and the Huskies had no downfield threat with three of its top four wide receivers out for the game.

Washington’s offensive line that returned all its starters was matched up front by the Grizzlies. Washington managed just 65 yards rushing and averaged 2.4 yards per carry.

It was the first home game with fans for Washington since the 2019 Apple Cup. They booed the home team off the field at halftime and were left stunned at the end.

“We wish we this could have been a better outcome for them. I want to thank them for coming out and we're going to go back to work and in trying to make sure they want to come back the next time,” Lake said. “This is extremely disappointing.”

Humphrey was 12-of-23 passing for 105 yards, and was sacked only once. Xavier Harris rushed for 70 and Isiah Childs added another 39, including a key 12-yard run on third-and-12 midway through the fourth quarter.

Montana hadn’t reached Washington territory since the opening drive of the game, but Humphrey’s 4-yard run gave the Grizzlies a 10-7 lead.

“I don’t think an (offensive) line can play any better than our line played,” Humphrey said. “They were outstanding. That’s a damn good football team over there and we held our own and they protected me all night. It was it was awesome.”

Washington went three-and-out on its next possession after Morris was sacked. Montana took over in Washington territory and drove to the Washington 5 before Macias hit from 22 yards with 2:54 left.

Montana was the first non-FBS team to hold a Pac-12 opponent under 10 points since Grambling State beat Oregon State 23-6 in 1985. ... Washington's seven points were the fewest in a home game since being shut out 41-0 by Stanford in 2010.

Montana: The Grizzlies were incredibly impressive on defense, especially on the defensive line. Washington’s inability to run the ball consistently and the pressure getting to Morris was the difference in the game. Morris was sacked three times along with the three interceptions.

Washington: Washington has no big play threats downfield due to a lack of wide receivers. Terrell Bynum, Rom Odunze and Jalen McMillan were all unavailable for the Huskies. Texas Tech transfer Ja’Lynn Polk was expected to have a big role, but had a 13-yard reception on the first play of the game and never returned due to an apparent injury.

Washington: At Michigan next Saturday.