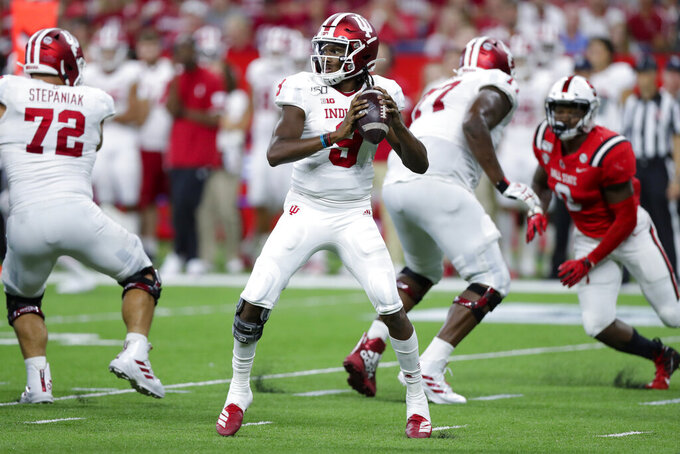 They might not know until Saturday morning: Coach Tom Allen told reporters Monday his injured starting quarterback will likely a game-time decision for the second straight week.

"I don't foresee it, hopefully, not being a day-to-day thing the rest of the season, but at the same time, for this Saturday's game, we definitely aren't going to know for several more days," Allen said. "He probably will eventually be a game-time decision with him, but I don't expect that to keep being the case every single week."

Penix won his first two college starts — against Ball State and Eastern Illinois — before sitting out last weekend's 51-10 loss to Ohio State with an undisclosed injury.

He played less than a half in a 52-0 victory over Eastern Illinois, and Allen said late last week that he did not believe Penix was hurt during the game. He is coming off surgery for a torn anterior cruciate ligament in his right knee. The injury, which occurred in October, kept Penix limited in spring practice before beating out incumbent starter Peyton Ramsey for the starting job this summer.

Ramsey took over for Penix in the blowout win, started against the Buckeyes and would likely get the call again this weekend if Penix can't play. Another redshirt freshman, highly-touted Jack Tuttle, finished the Ohio State game.

Allen has been short on details about the injury.

Penix got off to a fast start this season, flashing the potential coaches saw on the practice field. He threw for 326 yards and one touchdown while rushing seven times for 67 yards in a victory over Ball State. He was even better against Eastern Illinois, going 14 of 20 with 197 yards, two touchdowns and no interceptions before taking a seat.

Ramsey went into last weekend as the most accurate quarterback in school history. But the junior struggled against the Buckeyes, finishing 19 of 33 with 162 yards, no touchdowns and one interception.

Allen was so upset with Indiana's overall performance he declined to hand out any of the traditional weekly team awards and acknowledged the defense had 16 missed tackles on 11 plays, allowing the Buckeyes to gain an additional 166 yards.

"One was a 65-yard after contact play, and that's basically after we have a chance to tackle the ball carrier or the receiver that becomes the runner," Allen said. "But most of them were out of the backfield."

Getting Penix back could help Indiana (2-1, 0-1 Big Ten) rebound against the Huskies.

But now they're forced to play the waiting game for a second straight week.

"We just tell our guys, hey, you got to do everything you can, work as hard as you can to be back as soon as you can," Allen said. "He is a young quarterback and so getting him reps is very important. So to me if he can, if he is able to go, then he needs to go."