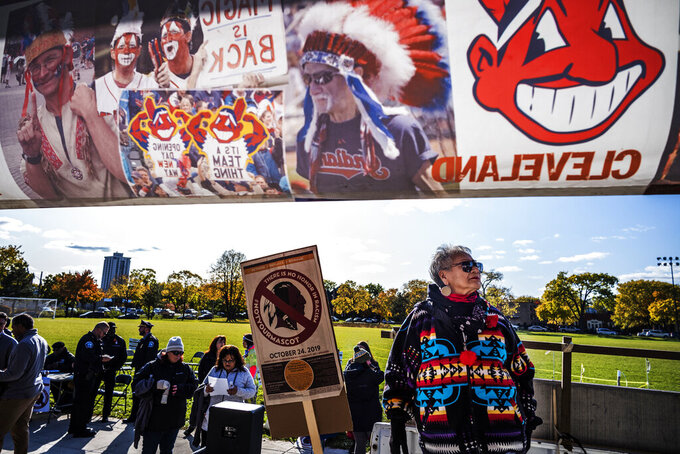 Protesters, including Marcy Hart of the White Earth Nation, march from Peavey Park to US Bank Stadium to protest the use of "Redskins" in the name of the Washington NFL football team, before Washington's game against the Minnesota Vikings on Thursday, Oct. 24, 2019, in Minneapolis. Protesters also had signs about the Kansas City Chiefs, the Cleveland Indians and the Atlanta Braves. (Richard Tsong-Taatrarii/Star Tribune via AP)

MINNEAPOLIS (AP) — Hundreds of protesters chanting "We are not your mascot" have marched in Minneapolis against the Washington Redskins team name.

Demonstrators rallied Thursday ahead of the Minnesota Vikings' game against Washington. The protesters called the team's name racist and degrading to American Indians.

Minnesota Lt. Gov. Peggy Flanagan told the crowd the mascot "dehumanizes our people." Flanagan is a member of the White Earth Band of Ojibwe.

But David Glass, president of the National Coalition Against Racism in Sports and Media and a member of the White Earth Nation, says the name is an offensive racial slur.