K-State gets Tulane in final tune-up before facing Oklahoma 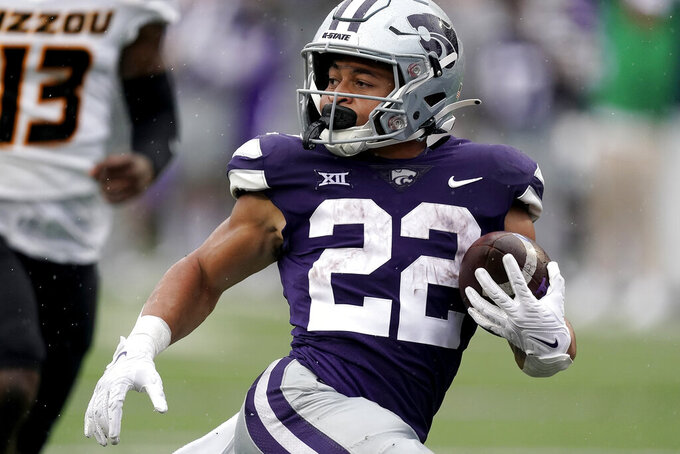 Kansas State running back Deuce Vaughn runs for a touchdown during the second half of an NCAA college football game against Missouri Saturday, Sept. 10, 2022, in Manhattan, Kan. (AP Photo/Charlie Riedel)

Line: Kansas State by 13 1/2, according to FanDuel Sportsbook.

This is Kansas State's final tune-up before Big 12 play begins next week against Oklahoma. The Wildcats are coming off a 40-12 blowout of former conference rival Missouri. The only touchdown they allowed came on an untimed down to end the game. Tulane opened with a 42-10 win over Massachusetts and beat Alcorn State 52-0 last week. The Green Wave are taking a big step up in class.

Kansas State QB Adrian Martinez has thrown for just 154 yards without a touchdown pass this season, though those numbers are a bit misleading. The Wildcats went vanilla when they were up big against South Dakota, then played in heavy rains against Missouri. Still, it would be good to get the passing game going against Tulane before facing the Sooners.

Tulane QB Michael Pratt should provide another good test for the Kansas State secondary. He was 17 of 21 for a career-high 318 yards and three touchdowns against Alcorn State last week.

Kansas State RB Deuce Vaughn has eight consecutive games of at least 100 yards rushing after another big performance against the Tigers. He has a Big 12-best 271 yards rushing and three touchdowns so far. He needs two more 100-yard efforts to match Darren Sproles, who set the school record with 10 straight during the 2002 and ’03 seasons.

Tulane has won its first two games for the first time since 2002 and only the fourth time since 1975. ... Pratt has thrown at least one TD pass for the Green Wave in 22 of his last 23 games. ... Tulane has run for at least 100 yards in 76 of its last 79 games. ... The Green Wave are coming off their first shutout since beating Louisiana 56-0 on Nov. 1, 1997. ... Tulane has scored at least 30 points in 34 games since Willie Fritz took over in 2017. The Green Wave have scored more than 40 in 17 of them. ... Kansas State is allowing six points and 246 yards per game through two games. ... The Wildcats have five interceptions, their most through two games since 2000. ... Vaughn has a rushing TD in nine straight games, the longest streak for the Wildcats since current offensive coordinator Collin Klein had 12 in a row in 2012. ... Martinez is one of two active quarterbacks nationally with at least 8,000 yards passing and 1,000 yards rushing for his career. He is second among active QBs with 2,392 yards rushing and 37 TDs rushing. ... Kansas State is seventh nationally with 532 yards rushing.