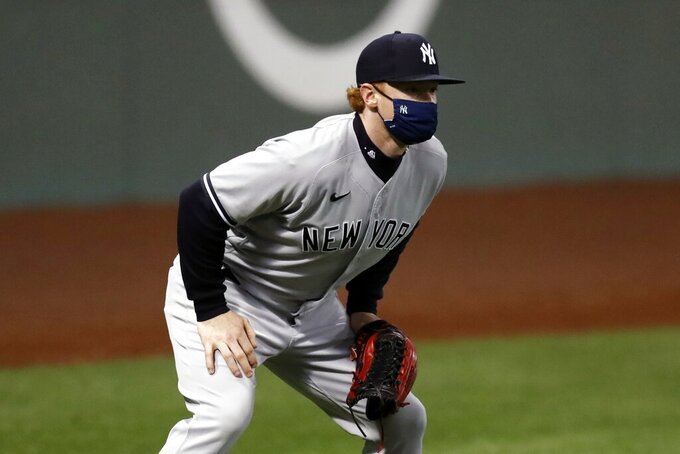 New York Yankees' Clint Frazier wears a mask while playing in left field against the Boston Red Sox during the fourth inning of a baseball game Friday, Sept. 18, 2020, in Boston. (AP Photo/Michael Dwyer)

Georgia State has postponed Saturday’s college football game at Charlotte because of the coronavirus.

The school says it decided not to play out of an abundance of caution because of positive COVID-19 tests and contact tracing.

It’s not known if the game will be rescheduled.

This mark’s the second straight postponement for Charlotte. The 49ers (0-1) called off last weekend’s game at North Carolina after a positive test forced nine offensive linemen into quarantine.

Athletic director Laird Veatch says COVID-19 has had a major financial impact on the Tigers’ athletics department, leading to a sad day for Memphis athletics that he had hoped would never come.

Memphis originally projected a $4.4 million deficit and made moves in July that included a 14% cut to operational budgets. That deficit has more than doubled to at least $9 million to $11.5 million. Veatch says Memphis had limited options, forcing these challenging decisions.

All full-time employees earning $40,000 or more will have furloughs equal to 10% to 20% of their salary through the end of this fiscal year. Memphis says the highest-paid employees will get the biggest cuts, with those earning $250,000 or more being cut 20%. Veatch says these moves will save more than $2 million, which will help cover unfunded scholarships for athletes.

Skate America next month in Las Vegas will be held without fans due to Nevada Gaming Control Board guidelines.

The event is the first of six on the ISU Grand Prix schedule, and is set for Oct. 23-25 at the Orleans Arena. For now, the ISU plans to conduct all of the competitions, though it already has canceled the Junior Grand Prix series because of the coronavirus pandemic.

Also part of the series are Skate Canada in Ottawa; Cup of China in Chongqing; Internationaux de France in Grenoble; Rostelecom Cup in Moscow; and NHK Trophy in Osaka, Japan. The Grand Prix Final is set for Beijing in December.

No major ISU figure skating event has been held since the world championships in Montreal were canceled in March.

Cyprus is ramping up coronavirus testing for soccer players and shutting down smaller stadium locker rooms following the emergence of large clusters of COVID-19 infections at two first division teams.

Officials from the health ministry and the Cypriot soccer federation have decided to carry out random coronavirus tests on five people from each of 20 teams from all divisions every week. Another 7,000 tests will be carried out on players from all divisions except the first division.

All stadium locker rooms smaller than a certain size will be closed and health officials will start inspections of all soccer stadiums and team installations to ensure health protocols are followed.

Any player who tests positive for COVID-19 is immediately placed in isolation under the existing protocols. Players who test negative within 24 hours of a confirmed case will be allowed to return to practice and take part in scheduled matches.