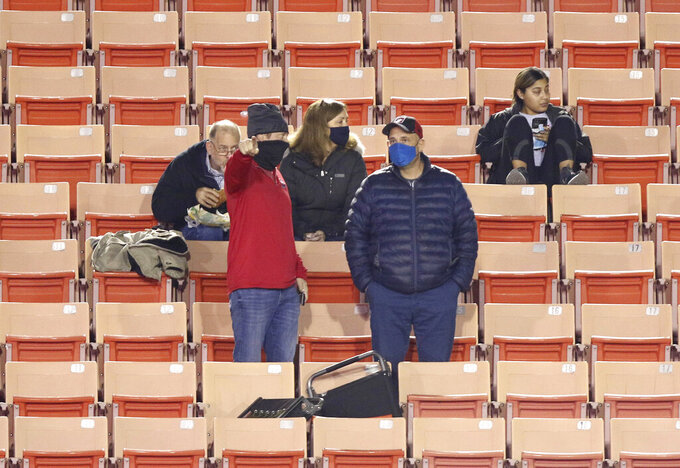 Former world No. 1 and two-time major winner Ariya Jutanugarn and her sister Moriya have tested positive for COVID-19 and have withdrawn from next week’s LPGA Tour event in Florida, the Pelican Women’s Championship.

“Although we have been very cautious, unfortunately Mo (Moriya) and I have tested positive for COVID-19. We are now self-isolating and working on contact tracing all those we have been in contact with,” Ariya Jutanugarn posted on her Facebook page on Saturday in Thailand.

The sisters said they contracted the disease earlier this week in the United States, but gave no further information.

Ariya Jutanugarn, who won the 2016 British Open and 2018 U.S. Women’s Open, said her condition is improving but she has lost her sense of taste and has difficulty breathing.

The Cowboys are on their bye week. Coach Mike McCarthy has suggested Dalton would return before the club’s next game Nov. 22 at Minnesota. Dalton became the starter after Dak Prescott’s season ended because of a broken ankle.

Dalton also has to clear concussion protocol. The 10th-year player got a concussion against Washington and was on the verge of returning when he went on the COVID-19 list.

The Ukrainian Football Association reported five cases of the coronavirus on Friday, one day before its national team’s Nations League game against Germany.

The association said they remained isolated in their hotel rooms while the rest of the team left for training. Ukraine can still call on 17 outfield players and four goalkeepers for Saturday’s game in Leipzig.

“Tomorrow we’ll have another round of tests,” Ukraine coach Andriy Shevchenko said. “So far we are waiting on information about the game, particularly from UEFA.”

UEFA health protocols say a game can go ahead as long as both opponents have at least 12 outfield players and one goalkeeper available.

But local health authorities in Leipzig will have the final say on whether the game goes ahead. The next round of tests is due around 2 p.m. local time on Saturday, after which a decision will be taken on whether the whole team needs to quarantine.

UAB has called off a second consecutive football game because of positive COVID-19 tests.

The Blazers scrapped a trip to Texas next week to play UTEP. The game had already been moved to Midland, about 300 miles east of El Paso, because of a massive surge of coronavirus cases in the far West Texas city. The game was supposed to be played next Friday.

The decision not to go to Texas came a day after UAB called off a home game against North Texas. In both cases, officials say they might try to reschedule the games.

UTEP is still scheduled to play at UTSA on Saturday.

The decision on Bicknell comes the same week the Bengals activated defensive back Mackensie Alexander and linebacker Jordan Evans off the COVID-19 reserve list while placing defensive tackle Margus Hunt on the list.

Winston Rose, a cornerback on the practice squad, also was placed on the COVID-19 list. The Bengals currently have four players on the list: Rose, Hunt, tackle Fred Johnson and cornerback Trae Waynes.

Canada’s deputy chief of public health says the Toronto Raptors have presented a good plan to play at home during the upcoming NBA season, but concerns remain over enforcing strict health protocols and travel over the border with the United States.

Dr. Howard Njoo said Friday that public health officials from Ontario, Toronto and the Public Health Agency of Canada have had discussions with the Raptors, who are hoping to play at Scotiabank Arena despite spikes in COVID-19 cases at home and in the U.S.

Njoo said the Raptors presented a plan with good health protocols and have learned from the NBA’s “bubble” experiment, when the league finished the 2019-20 season at an isolated campus in Florida.

But Njoo said it would be “tough on everyone involved” to observe the same health measures over a months-long NBA season during which teams are not isolated together.

He also said cross-border travel “continues to be an issue.”

The Canada-U.S. border is closed to nonessential travel and those entering the country are subject to a mandatory 14-day quarantine.

The Cleveland Browns have placed offensive lineman Chris Hubbard on the COVID-19 list after he tested positive for the coronavirus.

The team revealed Hubbard’s result after shutting down its facility in Berea, Ohio, to do contact tracing. The Browns said “zero high-risk close contacts were identified” after the tracing.

Cleveland hosts the Houston Texans on Sunday and an NFL spokesman said the game will go on as scheduled. Hubbard will not be allowed to play. He started the past three games at right guard while Wyatt Teller was out with a calf strain.

Hubbard’s positive test and the contact tracing delayed the start of Friday’s practice. The Browns had already been adhering to intensive protocols this week after a staff member tested positive for the virus last weekend. That result led to quarterback Baker Mayfield being placed on the reserve/COVID list last Sunday when the Browns were off.

The Seattle Sounders say a member of their technical staff has tested positive for COVID-19.

The team says the staff member received the result on Thursday and has been placed into isolation. All players and other members of the team’s technical and support staff have returned multiple negative tests and none have symptoms.

The team shut down operations at its training facility on Thursday and said it would have a modified outdoor training session on Friday.

The Sounders are off until Nov. 24 when they face LAFC in the opening round of the Western Conference playoffs.

Canisius has paused men’s basketball activities due to a positive COVID-19 test result among an unidentified member of the program. The school says it will conduct contact tracing as part of its protocol to limit the spread of the coronavirus.

The team is scheduled to open the season at home in Buffalo, New York, against Fairfield. Canisius is coming off a 12-20 season.

Fans attending games this season for the NBA’s Memphis Grizzlies and the Memphis Tigers will be limited to roughly 20% of capacity at FedExForum.

Officials on Friday announced policies for all events for the foreseeable future at FedExForum following guidance from the Shelby County Health Department and protocols from the NBA. Fans must wear masks or face coverings at all times inside the arena, and the NBA already has said face shields and bandanas will count only as a second layer of protection. Physical distancing at least 6 feet apart also will be required.

Officials also are considering the possibility of COVID-19 testing for fans sitting in specific areas inside the arena for Grizzlies’ games. The NBA season is scheduled to start Dec. 22.

Georgia Tech will restrict capacity to 1,200 at men’s basketball games this season, ruling out any public ticket sales because of the coronavirus pandemic.

The school said it is following social distancing guidelines recommended for indoor events by the Centers for Disease Control and Prevention.

The remaining 300 seats will be distributed to guests of the athletes, coaches and athletics department staff.

In accordance with New York state guidelines and Siena protocols, anybody who tests positive is isolated and close contacts to those individuals are quarantined.

The state Department of Health initiates all contact tracing and will work in cooperation with the school after interviewing the positive individuals to determine close contacts.

Eight Tennessee football assistant coaches have declined proposed pay cuts with the athletic department dealing with a $40 million loss in revenue during the coronavirus pandemic.

Tennessee announced pay cuts in October starting Nov. 1 through June 30 for employees making more than $50,000 a year. But Tennessee football coaches must agree to any reductions as part of their contracts.

The Knoxville News-Sentinel reported Friday that every head coach at Tennessee signed a contract amendment agreeing to reduce pay through June 30.

The only football assistants to accept pay cuts are wide receivers coach Tee Martin and running backs coach Jay Graham, who both played at Tennessee.

Tennessee coach Jeremy Pruitt was not asked to take a pay cut because he did not accept a raise for 2020 in a contract extension signed in September. Athletic director Phillip Fulmer announced in August he would take a 15% pay cut that started Nov. 1.

Liverpool striker Mohamed Salah has tested positive for the coronavirus.

The announcement was made by the Egyptian soccer association on Twitter ahead of Saturday’s game against Togo.

A Cleveland Browns player has tested positive for the coronavirus.

In a statement, the Browns did not identify the player but said they were informed of the test on Friday morning.

“The individual has immediately self-isolated and the Browns facility is closed this morning while contact tracing is being conducted,” the club said. "The team will continue to hold meetings remotely (part of the NFL-NFLPA intensive protocol) and will consult with the league and medical experts on the appropriate next steps as the health and safety of our players, coaches, staff and the entire community remains our highest priority.”

Browns quarterback Baker Mayfield returned to practice on Wednesday after being on the COVID-19 list and expects to play Sunday against Houston. Mayfield had to isolate for several days after he had close contact with a staff member who tested positive for the coronavirus.

No. 15 Coastal Carolina’s game at Troy on Saturday has been postponed because of a combination of positive COVID-19 tests and injuries for a specific position group within the Troy football team.

Both schools announced the postponement Friday. The two schools and the Sun Belt Conference are working to reschedule the game.

Coastal Carolina athletic director Matt Hogue said the team was disappointed in not playing this weekend, but understood the reasons why.

The Chanticleers were looking to go 8-0 overall. Their next game is Nov. 21 at home against Appalachian State. Troy is scheduled to play Middle Tennessee at home on Nov. 21.

The Norwegian soccer federation has canceled training after an unnamed player tested positive for the coronavirus.

The federation says the player has been put in quarantine.

Norway is scheduled to play Romania in Bucharest on Sunday in the Nations League.

Team doctor Anders Valentin says Starfelt is “doing well” and has been isolated in his hotel room.

Sweden is scheduled to play Croatia in Stockholm on Saturday.

Ireland midfielder Alan Browne has tested positive for the coronavirus after playing against England in a friendly.

The Football Association of Ireland says Browne has been isolated from the rest of the team but no one else is considered a close contact.

The FAI says the rest of the squad has tested negative ahead of Sunday’s Nations League game against Wales.