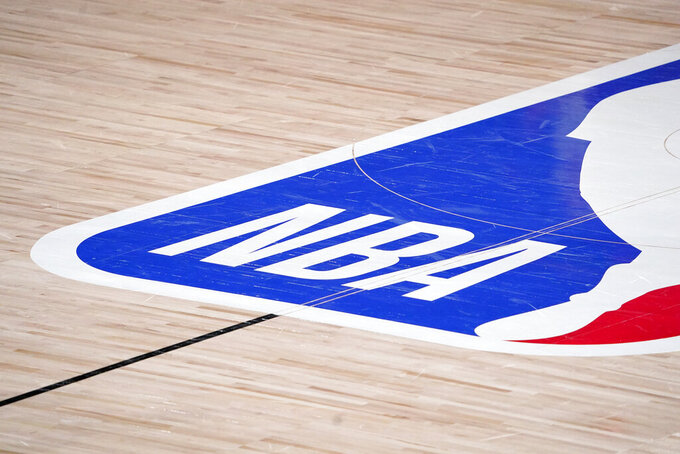 FILE - In this Sept. 2, 2020, file photo, the NBA logo is displayed at center court during an NBA first-round playoff basketball game between the Houston Rockets and Oklahoma City Thunder in Lake Buena Vista, Fla. NBA training camps open around the league Tuesday, Dec. 1, 2020,though on-court sessions will be limited to individual workouts and only for those players who have gotten three negative coronavirus test results back in the last few days. (AP Photo/Mark J. Terrill, File)

Washington’s football game at Oregon on Saturday has been canceled because of COVID-19 cases in the Huskies' program.

Washington paused practices Wednesday after a rise in the number of positive cases and announced earlier Thursday it would not be resuming practices. In a statement, Washington coach Jimmy Lake said the team is doing what it can to resume football activities “as soon as we can safely do so.”

This will be just the second time the Ducks and Huskies have not played since 1945. The teams did not meet in 2001 due to a scheduling quirk.

The Dallas Cowboys have placed Chidobe Awuzie on the COVID-19 reserve list, a move that likely means the cornerback will be sidelined Sunday at Cincinnati.

Awuzie has already missed seven games this season because of a hamstring injury. If the fourth-year player is out against the Bengals, it will further test the depth at cornerback for Dallas.

While Trevon Diggs is eligible to return from injured reserve after being sidelined with a broken foot, coach Mike McCarthy didn’t sound optimistic about the rookie starter returning this week. Anthony Brown could return after missing the past two games with a rib injury that also sidelined him for three games early in the season.

The school announced the move Thursday. That followed coronavirus-related postponements of three nonconference games this year, though only one had been rescheduled.

In a release, the school said it was a cautionary step due to the pandemic as well as allowing players to spend time with families over the Christmas holidays.

“This is the best decision we could make as a program, in making sure that we are doing the right thing for our players,” Duke coach Mike Krzyzewski said in a statement.

Duke was originally scheduled to open Nov. 25 against Gardner-Webb, though that game was postponed due to a positive COVID-19 test and contact tracing within the Runnin’ Bulldogs program. That game was eventually rescheduled for Dec. 19.

Games against Elon for Dec. 6 and Charleston Southern on Saturday had already been postponed as those programs paused team activities, with no make-up date for either.

Duke (2-2) has lost home games to No. 4 Michigan State and No. 6 Illinois. The Blue Devils open Atlantic Coast Conference play at Notre Dame next Wednesday, followed by a Dec. 29 visit from Pittsburgh

The New Orleans Saints say they are shrinking the planned crowd size for a Dec. 20 home game against Kansas City from 15,000 to 3,000.

The club says current season ticket holders will have access to 3,000 tickets that will be distributed during the week of December 14 for the Chiefs game.

The Saints say capacity for a home game against the Minnesota Vikings on Christmas Day is still to be determined but likely will remain at 3,000 tickets.

The Saints played their first three home games this season without any ticketed fans in the stadium, although invited guests of players and staff have been permitted inside the 73,000 seat Superdome since New Orleans’ second home game of the season.

The first game with fans in the Superdome was on Oct. 25 against Carolina, when 3,000 were permitted to attend.

Capacity was expanded to 6,000 for home games against San Francisco on Nov. 15 and Atlanta on Nov. 22 and was expected to be increased to 15,000 for the final two regular season games in New Orleans before recent increases in positive COVID-19 cases.

Utah State’s men’s basketball team is pausing full team activities and has canceled its game against Weber State on Saturday due to positive COVID-19 tests within the program.

The Aggies’ game against Dixie State on Tuesday may also be impacted.

Utah State and Weber State are exploring options to reschedule the game later this season.

Green Bay Packers running back A.J. Dillon has been activated from the reserve/COVID-19 list.

The rookie second-round pick from Boston College had been on the list since Nov. 2. He hasn’t played in the Packers’ last five games.

Dillon has run for 97 yards on 23 carries this season.

Dillon wrote Thursday on Twitter, “Happy to be back out there... remember Covid hits everyone differently! I’ll be the posterboy for it’s no joke! I appreciate all the support throughout the process.”

Texas Tech has closed its football facility after eight members of the staff joined coach Matt Wells among those with positive tests for COVID-19.

Wells missed the regular-season finale against Kansas last weekend after testing positive during the week leading to the game. The school says the coaching staff started working remotely Wednesday so the football facility could be cleaned. The facility will be closed the rest of the week.

The season might not be over the Red Raiders (4-6) since all teams are eligible to participate in bowl games.

The Chicago Bears placed punt returner DeAndre Carter on the Reserve/COVID-19 list, closed their facility for a few hours, and pushed back practice Thursday because of a positive test of the new coronavirus.

The Bears initially called off practice in the morning and sent players in the building home before changing course in the afternoon.

The person who tested positive has been notified and is self-isolating.

“Obviously we’re not exempt from this pandemic,” Nagy said. “We all know that cases are on the rise. And I just want to credit our players and coaches for adapting and staying flexible. It’s not easy. But we have the right mindset.”

Chicago is scheduled to host Deshaun Watson and the Houston Texans on Sunday. The Bears (5-7) have lost six in a row, their worst skid since the 2002 team tied a franchise record by dropping eight straight.

The regular season-ending game between No. 23 Texas and Kansas, which had already been pushed back to Saturday because of positive COVID-19 tests within the Jayhawks’ program, has now been canceled due to an outbreak among the Longhorns.

Texas (6-3, 5-3) returned three positive tests after blowing out Kansas State last week, prompting school officials to shut down practice. The Longhorns had a walkthrough Wednesday only to discover there were more positive tests.

Washington continued to pause its football activities on Thursday due to a rise in COVID-19 cases, casting serious doubt over this weekend’s scheduled game against Oregon.

In a statement, Washington said the status of the game against the Ducks would be shared when more information becomes available.

The Huskies initially canceled practice on Wednesday due to a rise in the number of cases. Washington was awaiting additional PCR tests to confirm positive results. The school did not release the number of positive tests.

During his radio coaches show on Wednesday night, Washington coach Jimmy Lake said the number of cases and the lack continuity to them has left the school’s medical staff baffled.

Boston College has opted out of playing in a bowl game.

Coach Jeff Hafley said on Thursday that after speaking with his players the team decided to end its season.

The Eagles managed to make it through the entire season with just one positive COVID-19 test and played all 11 games on the schedule. But Hafley said the season has been a strain on the players.

“I wish we could play every Saturday,” Hafley said. “But I don’t have to sit in a dorm room by myself.”

The Eagles went 6-5, and 5-5 in the Atlantic Coast Conference to qualify for a postseason game for the fifth straight year. But the shuffling of the schedules has left everyone on edge.

Athletic director Pat Kraft said he was concerned that the players would spend another three weeks away from their families with no guarantee that the bowl game would actually kick off.

Citing a surge of positive COVID-19 cases and contact tracing in the football program, West Virginia has paused all football activities for the next seven days and will not host No. 13 Oklahoma on Saturday.

Athletic director Shane Lyons says the game will not be rescheduled. The next game for the Sooners (7-2) will instead be the Big 12 championship game against No. 10 Iowa State (8-2) in Arlington, Texas, on Dec. 19.

“Our intent is to get this spread under control as soon as possible for the health and safety of all involved,” Lyons said. “We are beyond disappointed not to play our final home game of the season and honor our seniors, but we need to act now and reevaluate our situation after Dec. 17.”

The NBA says eight more players have tested positive for COVID-19, bringing the total so far this season to 56.

Of those, the first 48 tested positive in the league’s initial return-to-market testing phase that went from Nov. 24 through Dec. 1. Those tests showed a leaguewide positivity rate of about 9%.

The next eight came from a batch of 541 players tested in the week that began Dec. 2. For that span, the positivity rate was just under 1.5%.

Preseason games across the NBA begin Friday and the regular season is scheduled to begin with two games on Dec. 22.

South Carolina has called off its men’s basketball game at George Washington on Monday because of a positive COVID-19 test.

The team paused activities Tuesday and canceled a home game with Wofford scheduled for Thursday. The school said the earliest the team could resume activities was Dec. 16 and only if there are no further positive tests between now and then.

Georgia has canceled its women’s basketball game against Radford because of a positive COVID-19 test within the Highlanders’ program.

The Lady Bulldogs (5-0) were scheduled to host Radford (0-2) on Saturday at Stegeman Coliseum. The Highlanders last played Sunday. They lost to Marshall 69-58.

Georgia has no plans to schedule a replacement game.