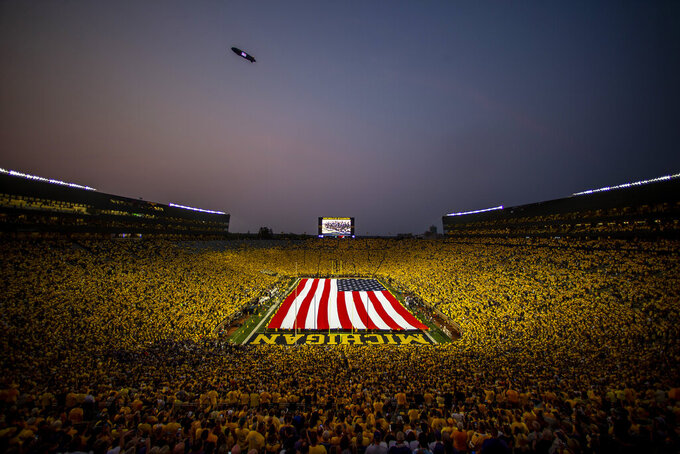 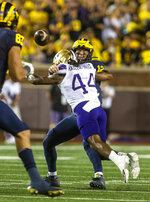 ANN ARBOR, Mich. (AP) — Blake Corum sprinted for a 67-yard touchdown to give Michigan a double-digit lead in the second quarter, one play after Jim Harbaugh called for a fake punt and the Wolverines pulled away to beat Washington 31-10 Saturday night.

Michigan (2-0) relied on a tandem of running backs, swarming defense and special teams to take and keep control of the game.

“We’re going to remain humble because we really haven’t done anything yet,” Corum said. “We have more to do and more to prove. I can’t wait to see how far we go."

The Huskies (0-2) have lost their first two games — including the opener to Montana — for the first time since 2008 when they finished 0-12.

Corum ran for 171 yards and three touchdowns, a week after he had 111 yards rushing and scored twice in the season-opening rout over Western Michigan, and credited the offensive line for his success.

“They fired off the ball and were real physical," Corum said. “They made my job easy, so shout out to them."

Hassan Haskins had 155 yards rushing and a score for the Wolverines, whose passing game was limited without injured receiver Ronnie Bell.

The Wolverines were not moving the ball much and led just 3-0 early in the second quarter when Harbaugh made a gamble that paid off.

“That was big,” Harbaugh acknowledged. “Pivotal.”

With the punt team on the field facing a fourth-and-1 from the Michigan 30, a short snap went to Michael Barrett and he ran 3 yards for a first down.

“It was a huge momentum shift,” Washington coach Jimmy Lake said. “That’s the nature of college football, especially when you’re on the road in that hostile environment.”

Corum ran through a huge hole on the next play and he ran past the secondary to give the Wolverines a 10-0 lead.

Washington was scoreless until Peyton Henry made a 28-yard field goal with 5:54 left in the third quarter. By the time Dylan Morris threw a 22-yard touchdown pass to Terrell Bynum early in the fourth quarter, the Huskies were down by two touchdowns.

Morris completed 20 of 37 passes for a career-high 293 yards and a touchdown. Bynum had five receptions for 115 yards and a score.

Michigan’s Cade McNamara was 7 of 15 for just 44 yards passing.

Washington: A season that started with high expectations with a team ranked 20th has turned into one with a lot of questions and concerns. A week after the Huskies became the first ranked FBS team to lose to a FCS team in five years, they were penalized for delay of game before the first snap of the game.

“We got the call in late and all of a sudden the play clock had already started, and the crowd was going," Lake said. "It’s everything that we’ve worked on in practice, blaring noise and blaring music, and so it’s unfortunate that we weren’t able to execute. It comes back to us as coaches.”

Michigan: Without Bell, the Wolverines struggled to throw the ball and made up for it with two running backs and a powerful offensive line. Harbaugh can potentially be conservative on offense with a defense that seems to be improved under first-year coordinator Mike Macdonald.

Washington receiver Giles Jackson, who transferred from Michigan last spring, had three receptions for 49 yards and three carries for 9 yards. Each time Jackson touched the ball, maize-clad fans booed him.

Jake Moody made a career-long, 52-yard-field goal to give Michigan a 3-0 lead midway through the first quarter.