Nebraska will play another 'guessing game' against Buffalo 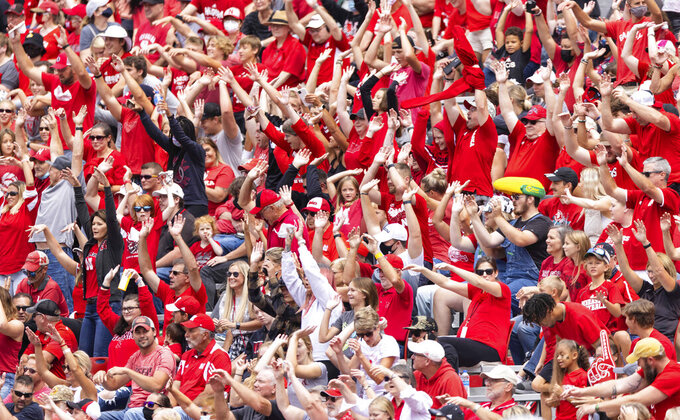 Nebraska fans do the wave as the Huskers play against Fordham during the second half of an NCAA college football game Saturday, Sept. 4, 2021, at Memorial Stadium in Lincoln, Neb. (AP Photo/Rebecca S. Gratz)

LINCOLN, Neb. (AP) — Nebraska goes into its game against Buffalo on Saturday in a situation similar to two weeks ago.

The Bulls (1-0) have a new coaching staff, and even though they've put one game on film, the Cornhuskers (1-1) can't be sure what they prepare for will be what they actually see.

Nebraska opened the season against Illinois and first-year coach Bret Bielema and struggled against a defensive alignment that had four linemen instead of the three the Huskers expected. They lost 30-22.

Buffalo scored on all of its possessions last week in a 69-7 win over Wagner, a Championship Subdivision team that had lost 13 of its previous 14 games.

“They got ahead fast and did some things late in the game that they didn’t do in the first 20 snaps,” Nebraska coach Scott Frost said. “It’s going to be a little bit of a guessing game.”

The number of Buffalo players in the transfer portal reached double digits, and six followed Leipold to Kansas.

But Linguist does have back third-year starting quarterback Kyle Vantrease, and running back Kevin Marks is the featured back after the departure of school career rushing leader Jaret Patterson. Despite starting only five games in his career, Marks has 2,693 yards and 30 touchdowns in three seasons.

This will be Buffalo's first game against a Power Five opponent since a 45-13 loss at Penn State in September 2019.

To prepare his team for the sellout crowd of 85,000 in Lincoln, Linguist showed his players a video of Memorial Stadium on a game day. And with a nod to to the scene in “Hoosiers” where Gene Hackman pulls out a tape measure to illustrate the height of a basketball hoop is the same everywhere, Linguist has given his players a talk about how football fields are all the same.

“The atmosphere and environment around us can change,” Linguist said, “but the field hasn’t changed, and let’s stick to the game plan and what’s in front of us, our job responsibilities and what we have to do.”

The Huskers will wear alternate uniforms to mark the 20th anniversary of the Sept. 11 terrorist attacks. The uniforms were unveiled two weeks ago in a moving video featuring Damian Jackson, a 29-year-old former Navy SEAL who is a reserve linebacker.

The all-white uniforms are trimmed with a red, retro NU logo and retro numerical font.

“Having ‘D Jacks’ on the team and being a part of that is pretty special,” Frost said. "It’s something that should be remembered and honored. The little bit that we can do to honor it is worth it.”

Nebraska's Markese Stepp had career highs with 18 carries and 101 yards in the 52-7 win over Fordham. Stepp joined the Huskers this year after three injury-plagued seasons at Southern California and is the co-No. 1 running back with Gabe Ervin Jr.

“I am willing to take as many carries as they give me. I embrace it,” Stepp said.

Buffalo has two players from the state of Nebraska, both from Omaha. Freshman Nolan Gorczyka is listed as the No. 2 left guard and junior Jack Hasz is the backup center.

Nebraska has said it wants to be able to lean on its running game this season. Buffalo should provide a good test. The Bulls have allowed only one 100-yard rusher in 23 games, Jaylon Bester of Miami (Ohio) in September 2019.

RETURN OF THE MAC

Nebraska is 6-1 against MAC teams, with the lone loss (21-17) coming against Northern Illinois in 2017. The Huskers have four more games scheduled against the MAC through 2027.