NFL Prospect Watch: Colorado State TE McBride does it all 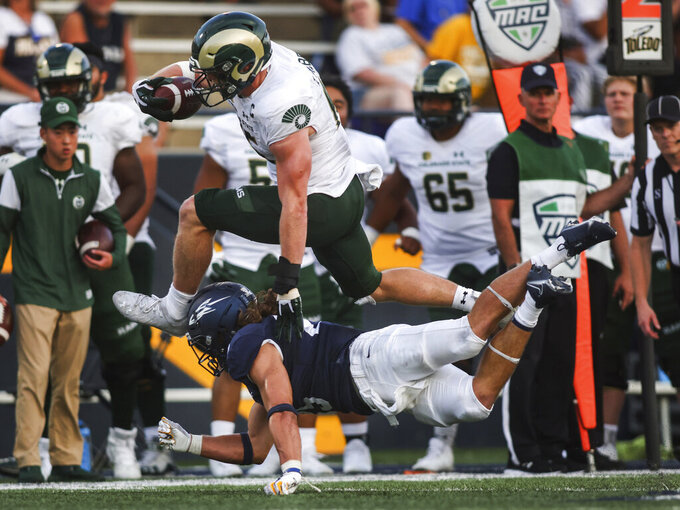 FILE - Colorado State's Trey McBride hurdles Toledo's Maxen Hook during an NCAA college football game in Toledo, Ohio, Saturday, Sept. 18, 2021. The player with the most receptions in college football midway through the first month is not a fleet-footed wide receiver with an NFL-bound quarterback. It’s bruising Colorado State tight end McBride, who is drawing praise not only for his pass-catching, but also his blocking and leadership. (Rebecca Benson/The Blade via AP, File)

The player with the most receptions in college football midway through the first month is not a fleet-footed wide receiver with an NFL-bound quarterback.

Rather, it is bruising Colorado State tight end Trey McBride, who is drawing praise not only for his pass-catching, but also his blocking and leadership.

Rams coach Steve Addazio thinks McBride is the best at his position in the college ranks, and his 30 catches for 339 yards through three games certainly make the coach pleased that McBride passed on leaving early for the NFL.

“When you talk about a complete tight end for the next level, that can get open and catch the ball, that can block people, is physically tough and (football) is their world … that’s the best tight end in the country right there,” he said.

"Trey thinks he’s good, but not in a bad way," Addazio said when the Rams opened camp in August. “He loves ball, he’s a great kid and fun to be around.”

McBride is a promising NFL prospect in a deep class of tight ends The Associated Press is spotlighting this week with help from Reese’s Senior Bowl executive director and former NFL scout Jim Nagy.

“He’s a do-it-all guy,” Nagy said. “He’s got he’s got good size. There’s enough want-to where he is a pretty good blocker for a college player. But to me, a couple of things that really stick out is he’s a really good athlete.”

That shows in the way he adjusts to catch passes and how he transitions from making the catch to turning upfield to gain yardage.

“He probably has the best catching skills of any tight end in this class," Nagy said. "But it’s also the catch skill part of it where where he adjusts and tracks the ball very naturally. When he is forced to adjust, he’s very coordinated and fluid.”

McBride has plenty of size and heft for the NFL at 6-foot-4 and 260 pounds, and his career-long reception of 69 yards shows that he can move well. He caught 22 passes for 330 yards and four touchdowns last season. For his career, he's got 104 receptions for 1,318 yards and 10 touchdowns.

McBride, one of two team captains as a junior, caught a deep ball against Wyoming last season around the 10 yard-line with a defender on his back and he carried the defender into the end zone for a touchdown.

McBride benefits from his size. Nagy said a lot of tight ends who are as adept in the passing game are smaller and less effective as blockers, so NFL scouts have to project how adding weight would affect their play.

“What you see is what you get. To me, we call those guys clean prospects. He is a really clean evaluation,” he said. "There’s not a lot of projection that has to go on in terms of his body type, size, skill set. I mean, it’s it’s all right there for you to see.”

Nagy said McBride is among seven tight ends he has rated as being selected in the first two days of the draft.