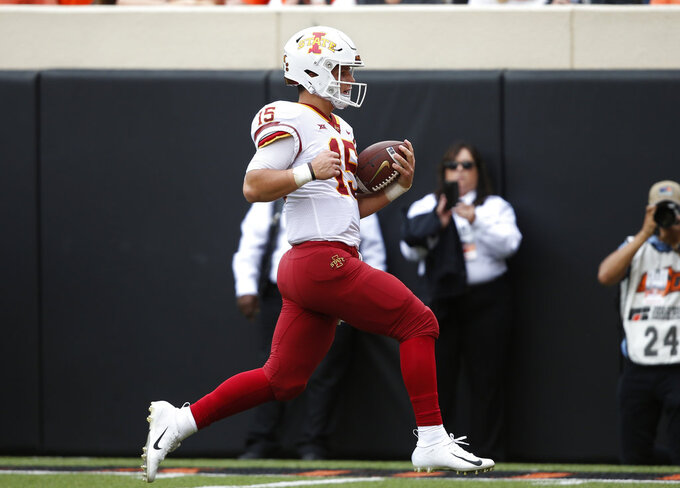 Iowa State quarterback Brock Purdy (15) runs into the end zone with a touchdown in the first half of an NCAA college football game in Stillwater, Okla., Saturday, Oct. 6, 2018. (AP Photo/Sue Ogrocki) 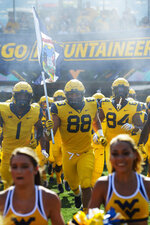 Some things to know about Week 6 in the Big 12 Conference:

No. 6 West Virginia (5-0, 3-0) at Iowa State (2-3, 1-2). With Heisman Trophy-contending quarterback Will Grier, the Mountaineers are the Big 12's only remaining undefeated team. Iowa State is on its third quarterback in true freshman Brock Purdy, who last week at then-No. 25 Oklahoma State entered on the second series. Purdy threw for 318 yards and four touchdowns, and ran for 84 yards and another score in a 48-42 victory. This is a matchup of teams that both had games canceled because of weather last month.

Kansas State running back Alex Barnes against Oklahoma State's rushing defense. Barnes ran for 250 yards and three touchdowns on 22 carries in a loss at Baylor last week. He is third in the Big 12 with 101.2 yards rushing per game, not far behind Cowboys junior Justice Hill (107.2 ypg). Oklahoma State is the league's top rushing defense, allowing 118 yards per game.

Texas (5-1, 3-0) hasn't had a turnover in its last three games, a span of 245 consecutive plays. ... Iowa State is 5-0 against Big 12 opponents in October the past two seasons. ... Grier has thrown for at least 332 yards and three touchdowns in all five games this season. ... Two teams have open dates: No. 11 Oklahoma (5-1, 2-1) and Kansas (2-4, 0-3). On the following Saturday, Oct. 20, six Big 12 teams will have open dates and there are only two conference games. After that there are five consecutive weekends with full slates of conference games. ... Texas Tech and TCU, teams that were in the Top 25 earlier this season, got the Big 12 an early start this week with a game Thursday night.

Baylor (4-2, 2-1) is a two-touchdown underdog going to Texas, which has beaten three Top 25 teams during its five-game winning streak. The Longhorns have a 76-27-4 series lead, including a 38-7 win in Waco last year. This is the first of consecutive road games against top-10 teams for the Bears, who will have an open date before going to No. 6 West Virginia.

Oklahoma State sophomore receiver Tylan Wallace is third in the Big 12 at 105 yards receiving a game. He became only the second underclassman in Cowboys history with four consecutive 100-yard games before his five catches for 82 yards and a touchdown last week against Iowa State, when he had a rare drop in a loss.