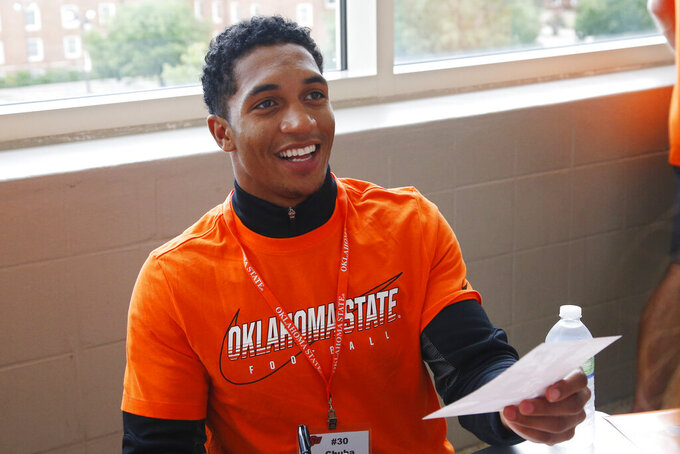 Oklahoma State running back Chuba Hubbard smiles as he talks with a fan during the NCAA college football team's fan day in Stillwater Okla., Saturday, Aug. 3, 2019. Hubbard was an unknown freshman backup a year ago. This season, he's a preseason All-Big 12 pick. (AP Photo/Sue Ogrocki)

Hubbard got an unexpected chance to shine when Justice Hill was injured late last season. In four games as the primary back, Hubbard averaged 106.3 yards a game and 5.4 yards per carry.

"He took it on like a pro," fellow running back LD Brown said. "He was very mature on it. He was built for it."

Hubbard worked hard in the offseason and is primed to have a greater role this season now that Hill is with the NFL's Baltimore Ravens. Hubbard is a complete package — a speedster with power and good hands.

Hubbard finished last season with 740 yards rushing and 229 yards receiving. He ran for 104 yards and three touchdowns against Oklahoma, rushed for 138 yards against West Virginia and capped his freshman season with a 145-yard performance in the Liberty Bowl win over Missouri.

Hill ran for 3,539 yards at Oklahoma State and was a two-time All-Big 12 pick, so stepping into that role came with pressure for Hubbard.

"Chuba was kind of like me in having to sit behind somebody that was an NFL talent kind of guy," Wallace said. "It was a crazy experience. We had to sit back and wait our turn. We kind of showed out when we went out there."

Brown, the No. 2 back, is a 191-pound speedster with a career average of 6.1 yards per carry. Gundy expects Hubbard and Brown to work well together.

"LD has done really well," Gundy said. "He has come a long way. He's a really good example of years of maturity. If those guys stay healthy through camp, they'll be a good package."

"He just continued to get better and better every game," Stoner said. "I think he'll pick up right where he left off last season and continue to get better. He takes his offseason very seriously, and I'm very excited to see what he can do this year."