Pac-12: So many questions, so little time 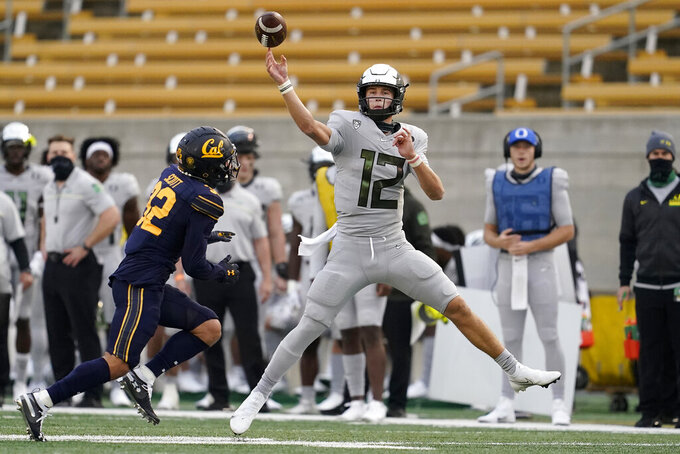 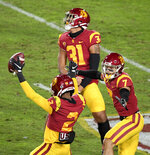 The Pac-12 heads into what amounts to the final regular season game before the conference championship dogged by the uncertainty that has loomed over the league from the beginning.

Will Washington be able to play Oregon on Saturday for the Pac-12 North title? Will Colorado be shut out in the South? And how many bowl games will be left to play in?

What is certain is the league is entering Week 6 of the abbreviated season with the Pac-12 championship game — and some other random matchups — looming on the horizon in Week 7. And there's no telling what is going to happen.

A rundown of some of the uncertainties:

The Huskies are coming off a 31-26 loss at home to Stanford last weekend but they still remain atop the Pac-12 North standings at 3-1.

The team is scheduled to head to Eugene this weekend for a deciding division game against Oregon (3-2). The winner earns a trip to the Pac-12 title game.

But that was thrown into doubt Wednesday when the team suspended all team activities because of an uptick of coronavirus positives. The Huskies were conducting additional tests and were expected to have an update Thursday.

If Washington can't play, it will still win the North by default. Despite playing fewer games because of cancellations, the Huskies will be the only division team with just one loss.

The Ducks, meanwhile, are left hanging. Oregon is coming off a 21-17 loss at Cal that dropped it out of the Top 25.

“The only status of the game that I am aware of is this game is scheduled for Saturday. Everything we’re doing, we’re going forward," Oregon coach Mario Cristobal said. “I understand there’s a pause over there. I get it. I’m very well informed on the protocols that go with that kind of stuff. But all indications and all information is that we’re going forward with this football game.”

Even if the Huskies win the Pac-12 North, whether with a win over the Ducks or by default, there's questions about whether they could host the title game — should it be awarded to them — because of local restrictions due to the coronavirus.

Undefeated Colorado, which appeared in the AP poll at No. 21 this week, hosts Utah on Saturday, a game that was originally set for Friday but was pushed back. Undefeated USC, ranked No. 15, visits cross-town rival UCLA at the Rose Bowl on Saturday.

The next step is confusing because Colorado played an out-of-conference game. But the Buffaloes (4-0) can earn a spot in the title game with a victory over the Utes coupled by a Trojans loss. USC and Colorado had their game earlier this season canceled, so if both teams win this weekend, the tiebreaker would be division wins— handing the South to USC (4-0).

Colorado could go undefeated and get shut out of the championship.

“I know there is chatter about other things and about matchups and stuff like that. Right now, we are scheduled to play Utah and it has been on our schedule from the very beginning. We are preparing for that. We have to take care of Utah,” Buffs first-year coach Karl Dorrell said.

Theoretically, if there are multiple games canceled this weekend, the Pac-12 could just decide to put USC and Colorado in the championship. It's a longshot, but conferences have had to be nimble in the midst of the pandemic.

The Big Ten's athletic directors paved the way for No. 3 Ohio State to play in the conference championship against No. 15 Northwestern by dropping the six-game minimum requirement for teams to be eligible for the game. Ohio State finished the regular season with only five games.

Just as the Pac-12 championship is up in the air, so are the postseason prospects for the conference.

The Las Vegas Bowl, between representatives from the Pac-12 and SEC, was canceled last week. Then the L.A. Bowl was called off.

The Pac-12 currently has just four bowl tie-ins: a New Year's 6 bowl, the Alamo Bowl, Independence Bowl and Armed Forces Bowl, which was only added last week. The Rose Bowl is designated for a CFP semifinal this year.