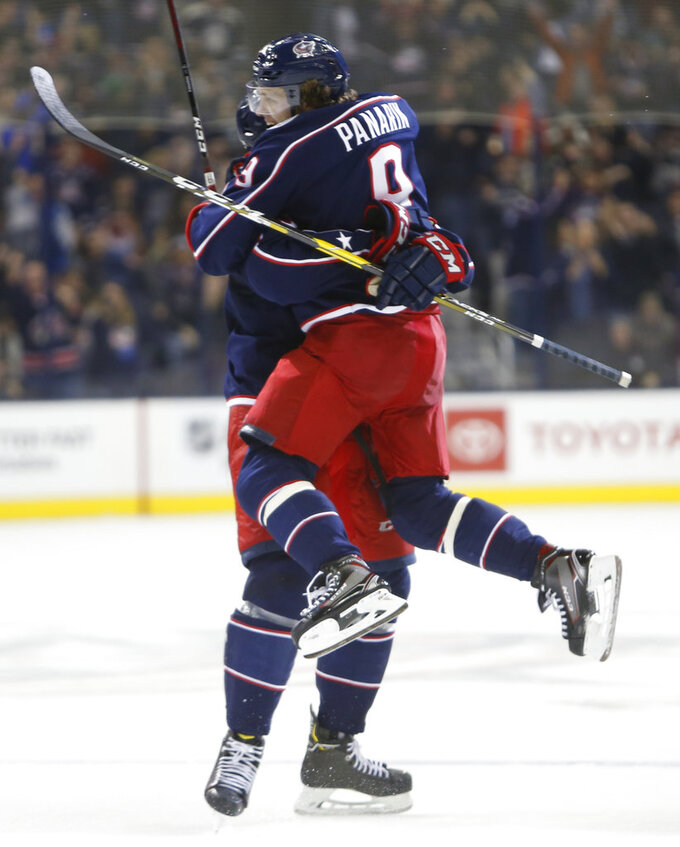 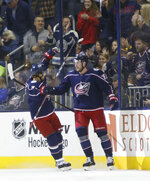 COLUMBUS, Ohio (AP) — Artemi Panarin scored 31 seconds into overtime to give the Columbus Blue Jackets a 5-4 victory over the Buffalo Sabres on Saturday night.

Buffalo got a pair of goals in a two-minute span in the third period to tie it, setting up the overtime snipe by Panarin, a shot from the left circle that glanced off the far post.

Panarin and Cam Atkinson each had two goals and an assist, and Pierre Luc-Dubois had a goal and a pair of assists, including the feed to Panarin that set up the overtime goal.

Joonas Korpisalo stopped 34 shots and is undefeated in four starts for the Blue Jackets, who won their second in a row and ended a three-game winning streak for Buffalo.

Jeff Skinner and Jason Pominville each had a goal and as assist, and backup Linus Ullmark — who previously had given up just one goal in two starts this season — had 32 saves for Buffalo.

Kyle Okposo got his third goal of the season for Buffalo 1:38 into the game. It happened on a 2-on-1 rush when Tage Thompson avoided sprawling defenseman David Savard in the slot and fed Okposo, who went between Korpisalo's pads.

Dubois evened it with a snipe from the middle of the right circle later in the first, with Panarin getting his fourth primary assist in the past two games.

Skinner got a fortunate deflection right onto his stick at the bottom of the right circle and slipped the puck between Korpisalo and the near post to get his team-leading sixth goal and make it 2-1 Sabres at the end of the first.

Dubois returned the favor to his linemate early in the second with a feed that led to Panarin's finish from the left circle to tie it again.

Atkinson scored late in the second after a back-and-forth with Riley Nash, then got his second of the night 31 seconds later on an odd-man rush to give Columbus a 4-2 lead.

Buffalo got goals from Pominville and then Casey Middelstadt on a power play to even the score.

NOTES: Atkinson's fifth and sixth tallies of the season in a 31-second span of the second period broke a franchise record for quickest back-to-back goals.... Sabres F Evan Rodrigues missed the game because he returned to Buffalo for personal reasons. F Remi Elie and D Nathan Beaulieu also were scratches for Buffalo ... The Blue Jackets had a three-goal second period for the second straight game and the fifth time this season. ... Columbus F Markus Hannikainen replaced Sonny Milano for the second straight game. D Adam Clendening and D Deam Kukan also were scratches for the Blue Jackets.