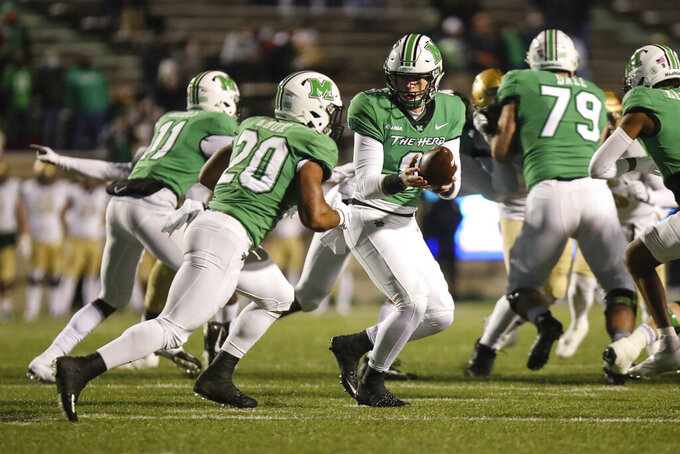 Both teams are trying to get rid of the sour taste of losing their conference championship games. Marshall, which won its first seven games, fell 22-13 to UAB in the C-USA title game. Buffalo lost 38-28 to Ball State with the MAC title on the line. The Thundering Herd have lost their last two games after a 7-0 start.

The game pits the nation's top rushing offense against the stingiest scoring defense and No. 2 run defense. Buffalo leads the nation averaging 309.5 yards per game on the ground and has tallied 30 rushing touchdowns, led by star tailback Jaret Patterson. Marshall is second nationally, giving up 88.9 rushing yards on average. The Thundering Herd has allowed only four rushing touchdowns. They're also giving up a nation's-best 12.6 points per game.

Marshall: Redshirt freshman QB Grant Wells leads C-USA in passing yards (219.7) and touchdowns (18). But he started 0 of 10 in the league title game and was just 8-of-23 passing for 138 yards with two touchdowns.

Buffalo: RB Jaret Patterson is expected to play after sustaining a right knee injury in the MAC Championship Game. Has 1,072 yards and 19 touchdowns in just six games, leading the nation in yards per game. Patterson tied the NCAA record with eight rushing touchdowns in a 70-21 win over Kent State on Nov. 28. Patterson finished with 38 carries for 408 yards, the most by an FBS player since Oklahoma’s Samaje Perine ran for an NCAA-record 427 yards in the win over Kansas State in 2014.

Marshall RB Brenden Knox (887 yards in nine games) said Monday he was opting out of the bowl game to prepare for the NFL draft. ... Marshall is 12-3 in bowl games for the highest winning percentage nationally among teams with at least six bowl appearances. ... Buffalo is playing in its fifth bowl game, winning for the first time last year, 31-9 over Charlotte in the Bahamas Bowl. ... Camellia Bowls have typically gone down to the wire. The total margin in the previous six games is 25 points. ... Six of the teams' previous meetings came in MAC play. Their last meeting was a 48-14 win by the Thundering Herd on Oct. 23, 2004.