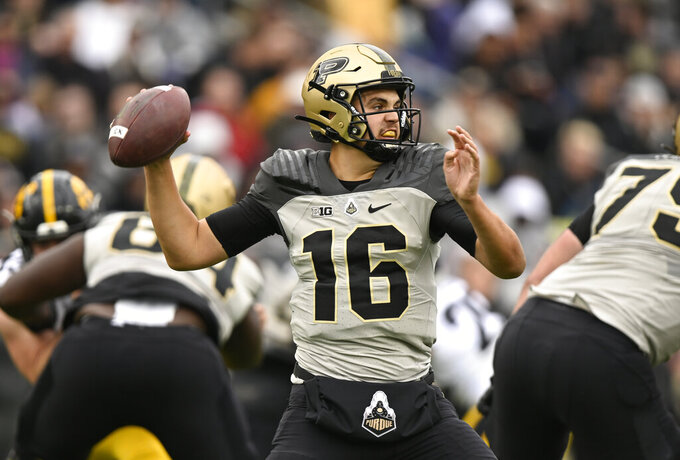 About 11 months after transferring from Syracuse, quarterback Tommy DeVito has helped to revitalize a long-struggling Illinois offense and lift the team into the Big Ten West lead with three games remaining.

DeVito and the No. 21 Illini (7-2, 4-2 Big Ten) have an opportunity to become the first team in program history to make an appearance in the Big Ten championship game in Indianapolis next month. To do so, they'll almost certainly have to get past a dangerous, if streaky, Purdue (5-4, 3-3) team on Saturday.

Costly turnovers and empty red-zone trips cost the Illini in their 23-15 loss to Michigan State at home last week. DeVito said there's “definitely a sense of urgency” among his teammates ahead of Purdue.

“I couldn’t sleep at night (after the loss), all night, just tossing and turning," DeVito said. “Every time I close my eyes, I just see these plays over and over. And it’s like, what if I were to do this? What if I would’ve done that? It haunts you at night, but at the same time, makes you better and hungry for the next week.”

The Boilermakers would love nothing more than to be the source of more Illini nightmares — especially since a win in Champaign would put them back in control of their ability to win the Big Ten West.

Purdue hosts lowly Northwestern next week before a rivalry matchup at struggling Indiana, while Illinois will travel to No. 3 Michigan before closing out against Northwestern in Evanston on Nov. 26.

Losses at Wisconsin and to Iowa in back-to-back weeks have put the Boilermakers in a position where they must win to keep their division title hopes within reach. If Illinois wins Saturday, it would clinch the division with a win over either Michigan or Northwestern; Illinois already holds tiebreakers over Wisconsin, Iowa and Minnesota.

Saturday's stakes could hardly get higher for either program.

“(Our defense) kind of got embarrassed the last three weeks, so guys are coming out with a chip on their shoulder,” Purdue defensive tackle Branson Deen said. “A lot of energy and take no prisoners, we’ve got to go get it and I think that’s kind of the motto going into this game.”

“(Purdue's) weapons, to be able to use the field, Jeff and his brother (offensive coordinator Brian Brohm) both obviously are very talented offensive minds,” Bielema said. “This year, they’ve kind of had a variety of different ways of winning games.”

Bielema has built on strengths that were already in place when he took over of last year. Chase Brown leads the nation with 1,344 rushing yards and a mix of vets and junior college additions are both paving the way for the run and ensuring DeVito has time to pick his targets.

“(Illinois) has beaten the last two teams that beat us, both Iowa and Wisconsin,” Brohm said. “Defense is aggressive, they’ve been ranked number one in the country. Done a great job offensively, really good running back. Quarterback's come in and done a good job. To go to their place is always going to be difficult, so we got our hands full.”

New faces have helped each side find more balance this year than in previous iterations.

DeVito's arrival turned Illinois into a multidimensional offense, capable of threatening teams through the air. His 71.8% completion percentage only trails Oregon's Bo Nix (73.3%).

Opponents find themselves forced between locking in on Brown or daring DeVito to carve them up. Isaiah Williams and Pat Bryant have emerged as capable receivers.

Deen called Brown a “physical guy, super slippery,” who reminds him of his own teammate in running back Devin Mockobee.

The redshirt-freshman has been a revelation for the Boilermakers offense, which was already productive via quarterback-receiver duo Aidan O'Connell and Charlie Jones.

But Michigan State's talented receivers made just enough plays last week and the Illinois offense converted on just one of six fourth-down attempts.

Witherspoon is determined to help his unit bounce back in a big way this week.

“We’re physical, we like to get after people and impose our will," Witherspoon said. "That’s what we’re going to do, go out there and dominate.”