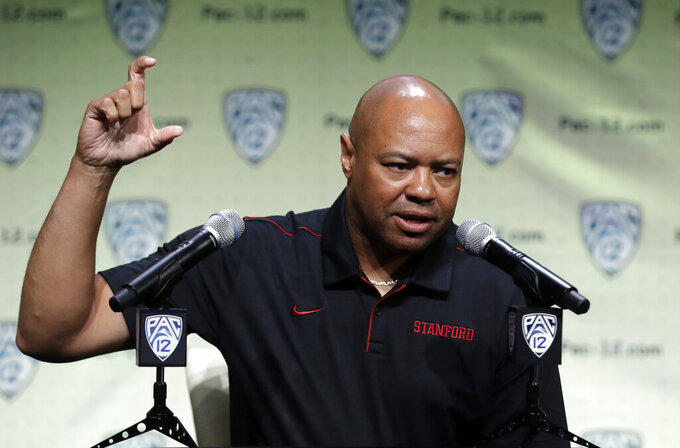 STANFORD, Calif. (AP) — The decision to remain in college one more season and delay entry into the NFL draft was an easy one for quarterback K.J. Costello and a beneficial one for Stanford.

After two promising seasons as starter to begin his college career, Costello figured he had plenty left to accomplish with the Cardinal before testing out the pros.

"It's unfinished business," he said. "I want to win a Rose Bowl. I want to win a Pac-12 championship. Who knows what the future in football holds beyond college?"

Costello's decision to remain in school provided a big boost to Stanford's immediate future. After a run of five BCS or New Year's Six bowl berths in a six-year span from 2010-15, the Cardinal have taken a small step backward under coach David Shaw.

Stanford has a 28-12 record the past three seasons, leading to three second-tier bowl berths and no conference championships.

Despite losing star running back Bryce Love to the NFL and facing one of the nation's toughest schedules, the hope at Stanford is that having a proven quarterback like Costello makes the difference.

Costello has made 20 career starts and his 3,540 yards passing last season ranked second in school history and his 29 TD passes ranked third best.

"The ceiling for K.J. is very high," Shaw said. "I think last year he played at a high level. In spurts, he looked as good as anybody in America playing a position quarterback. Now it's about taking that next step, and not just about making more great plays but making fewer bad plays and really fine-tuning his efforts every single week to be consistently great, and not great sometimes and good sometimes but consistently great."

Here are some other things to watch for this season:

RUN TO DAYLIGHT: Stanford has enjoyed a long run of prolific running backs, from Toby Gerhart to Stepfan Taylor to Christian McCaffrey to Love, that have been the engine of the offense. With Love dealing with injuries and the offensive line struggling last season, that ingredient was sorely lacking and the Cardinal finished 122nd out of 129 FBS teams in rushing. Cameron Scarlett, Trevor Speights and Dorian Maddox return and will be counted on for bigger roles, with freshmen Austin Jones and Nathaniel Peat also possibilities.

SEARCHING FOR WIDEOUTS: Costello lost his top three pass catchers from a year ago with JJ Arcega-Whiteside, Trent Irwin and Kaden Smith all heading to the NFL. There is still some talent led by dynamic tight end Colby Parkinson, and promising receivers like Michael Wilson, Connor Wedington and Osiris St. Brown, who showed flashes last season.

SHUTDOWN CORNER: Stanford's best player could be cornerback Paulson Adebo, who emerged as a star last season in his first year on the field. He had 24 passes defensed, four interceptions and led the nation by forcing an incomplete pass on 26.9% of his targets last season, according to Pro Football Focus.

EDGE RUSHERS: The Cardinal also have some good returning talent at defensive end led by Jovan Swann and Thomas Booker. Shoring up the run defense will be an emphasis after Stanford was gashed for 182.5 yards per game in its four losses last season.

SCHEDULE STUFF: Perhaps no team has a tougher schedule this year than the Cardinal, whose nonconference slate features games against defending Big Ten West champion Northwestern, two-time New Year's 6 bowl participant Central Florida and Notre Dame. With nine conference games on top of that, there is no break for Stanford throughout the season. The schedule has a rough start with games against Northwestern, USC, Central Florida and Oregon to open the season. A home game against Washington starts a three-game homestand in October and the season ends with a trip to Washington State, followed by home games against rival California and Notre Dame.