Sooner Schooner won't run for rest of season after accident 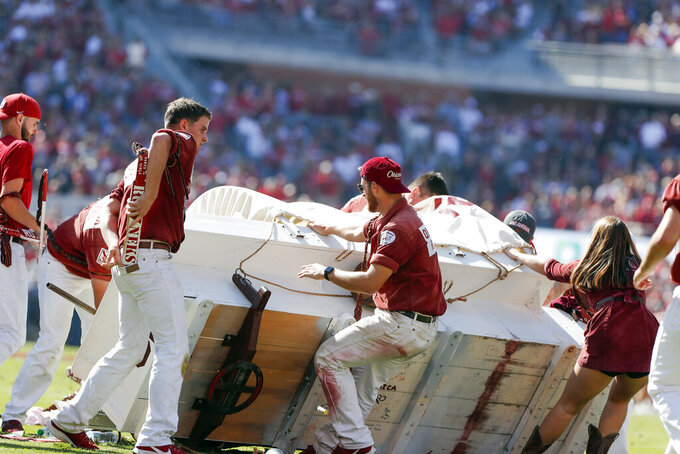 The Oklahoma Sooner Schooner flipped over during a touchdown celebration on the field during the first half of an NCAA college football game against West Virginia in Norman, Okla., Saturday, Oct. 19, 2019. (AP Photo/Alonzo Adams)

The University of Oklahoma says the "Sooner Schooner" will not run the rest of the season after it tipped over during a home game against West Virginia last Saturday.

Oklahoma senior associate athletic director Kenny Mossman made the announcement in a statement on Tuesday.

The Schooner, a miniature covered wagon, circles the field after Oklahoma scores. The mishap came after a second-quarter touchdown during Oklahoma's 52-14 win. Mossman said Tuesday that the university will repair the damaged Schooner and use it for viewing purposes, but it will not run. He said a new Schooner is under construction and should be ready to run its customary loop on the field for the Spring Game in 2020.

School officials said in a previous statement that there were no injuries to the three student spirit group members riding the wagon or the horses that pull it. They said it appears the weight distribution of riders in the rear of the wagon caused the spill.

The fifth-ranked Sooners have two more home games this season during which the Schooner would have been used — Nov. 9 against Iowa State and Nov. 23 against TCU.