Spartans getting a lift from Lombardi 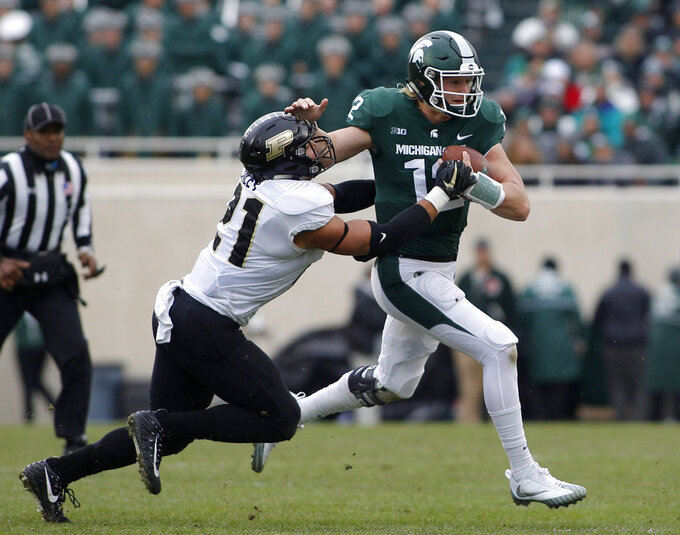 FILE - In this Oct. 27, 2018, file photo, Michigan State quarterback Rocky Lombardi, right, escapes from Purdue's Markus Bailey on a keeper during an NCAA college football game, in East Lansing, Mich. This isn't what Michigan State had in mind at the beginning of the season, but starting Rocky Lombardi at quarterback worked well enough last weekend in a win over Purdue. (AP Photo/Al Goldis)

EAST LANSING, Mich. (AP) — When Rocky Lombardi took the field as Michigan State's starting quarterback last weekend, it was another example of how this season has turned out a lot different from what the Spartans envisioned.

Then Lombardi guided his team to a victory over Purdue, and by game's end, the Spartans were feeling a bit better about themselves.

"He played very well," linebacker Joe Bachie said Tuesday. "He controlled the game. That's what we asked of him, just control the game, run the ball. Then he took his shots when he needed to."

Lombardi threw for 318 yards and two touchdowns in Saturday's 23-13 victory , and perhaps most significantly, he avoided any interceptions. It's not clear how long Lombardi will hold the starting job ahead of Brian Lewerke, who has been dealing with a shoulder injury, but Michigan State has to be encouraged so far by what its backup quarterback showed against Purdue.

"I think it's a good problem, let's just put it that way," coach Mark Dantonio said. "You've got a guy that played well, and we'll make decisions based on health and other things as we go forward."

For what it's worth, Lewerke and Lombardi are listed together atop the team's depth chart heading into Saturday's game at Maryland.

Michigan State came into the season with high expectations, thanks in part to the fact that Lewerke and running back LJ Scott were back from last year's 10-win team. Scott, however, has played in only four games, and Lewerke's health issues eventually sidelined him as well.

The Spartans were reeling a bit after being shut down in a loss to Michigan two weekends ago, but Lombardi replaced Lewerke, and Michigan State rebounded against a Purdue team that was coming off a big win over Ohio State. Lombardi attempted 46 passes, and the offense didn't look much different from usual in terms of play calling.

One area Lombardi feels could improve is his accuracy throwing deep.

"That's something that I did well in high school," said Lombardi, a redshirt freshman. "So I definitely noticed it on film. I was like, 'Man, you know what? I could have hit some of those shots.' We were five, six plays away from putting up a lot of points."

Lombardi, not surprisingly, said he heard from plenty of supporters after the game.

"I got a lot of love from my family and friends, especially back home," said Lombardi, who is from Clive, Iowa. "It was good to hear from all those people."

Michigan State (5-3, 3-2 Big Ten) is a longshot to win the Big Ten title after two conference losses, but the quarterback situation may go a long way toward keeping the remaining games in 2018 compelling. Lewerke is a junior, so the questions about who starts could persist well beyond this season.

For now, however, Lombardi has brought some intrigue. He says he has no expectation for when he'll find out who plays this weekend, but he'll be prepared regardless.

NOTES: Dantonio said injured OL Matt Allen will not make the trip this week. He also missed the Purdue game.