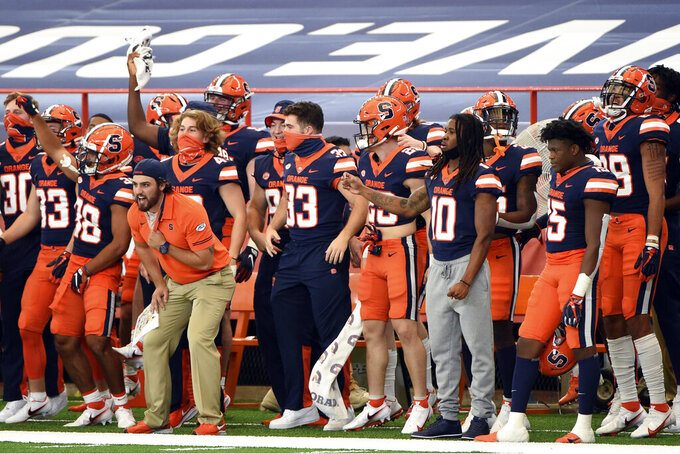 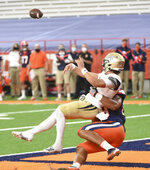 The touchdown passes to interceptions ratio is raising eyebrows around the Atlantic Coast Conference and some coaches point to the coronavirus as the culprit.

Coaches are not placing the blame totally on the coronavirus, but some say it's a factor.

“That’s a really good question," Virginia coach Bronco Mendenhall said when asked if the virus was the cause of all the picks. “I don’t truly know, but it certainly has had to have influenced, right? Repetition equals consistency. And so when you don’t have as much repetition, or if you have moving parts around you (caused) by the virus and roster changes and possibly who you’re throwing to, chemistry is then affected.

"Probably preparation, consistency and chemistry are affecting the quarterbacks maybe at a higher level than in a normal year, and we all know this isn’t normal,” said Mendenhall, whose Cavaliers had a chance to make it a one-score game against top-ranked Clemson Saturday but Virginia QB Brennan Armstrong threw a critical interception in the end zone early in the third quarter in the 41-23 loss.

Syracuse coach Dino Babers points at a lost summer due to the pandemic.

“I really believe it goes back to the summer,” Babers said. “The quarterbacks and the receivers really get a lot of stuff done when they have their player-led workouts that were totally eliminated.”

North Carolina Quarterback Sam Howell threw 38 touchdown passes — the most by a true freshman in Bowl Subdivision history — with just seven interceptions last year on 422 attempts, a rate of 1.7%. But he’s thrown for just three scores with three interceptions on 60 attempts so far this season, a rate of 5%.

The Tar Heels have played just two games and had two straight open weeks due to a coronavirus-related cancellations. Coach Mack Brown said his offense has to get more patient.

“Last year, we had so many deep balls and we just could score so quickly,” Brown said. “And right now, people are backing off, and they’re making us hold the ball longer. We’ve ... got to get the ball into people’s hands more quickly.”

Coaches also point to other factors, including quarterbacks adjusting to new systems and inexperienced QBs.

Cutcliffe, who groomed both Peyton and Eli Manning at their college stops, said part of the challenge for a new quarterback is learning everything from route concepts to “one of the most versatile” protection systems up front. He said he’s also spending each week talking with Brice about what he feels comfortable with.

“So there’s a lot of communication that goes with the quarterback, a lot has to happen quickly at the line of scrimmage,” Cutcliffe said. “I think that’s a challenge for any new quarterback.”

Syracuse redshirt junior QB Tommy DeVito had 19 touchdown passes with only five interceptions last season and owns a school-record streak of 206 pass attempts without an interception despite being pressured — Syracuse allowed 50 last year and has given up 15 this season.

In three games this season, Syracuse has three TDs and three picks, with DeVito throwing two interceptions in 70 attempts.

For Louisville’s Malik Cunningham, who has five interceptions to go with seven touchdowns, it’s a matter of making the right read.

“Most of them have been a bad decision, throwing it late or not throwing the ball at all,” Louisville coach Scott Satterfield said. “All last year he did a good job of taking care of the football. It’s about making the right, proper decisions.”

Then there's dual-threat freshman QB Jeff Sims of Georgia Tech, who has eight interceptions with three TD passes. Offensive coordinator Dave Patenaude also is quick to point to the pandemic.

“I think the real timing and the understanding of what you’re doing in the spring is big, especially for young guys, especially for us playing a young quarterback,” Patenaude said. “That timing piece is big. I think the thing a lot of people miss out on is that these guys didn’t have a summer together. The timing and the understanding of where guys are going to be, just the overall repetition of that, I think, is missing.”

Clemson coach Dabo Swinney hasn't had that problem. His top-ranked Tigers are led by Trevor Lawrence, who hasn't thrown an interception in 314 attempts. And Miami's D'Eriq King, in his final season of college ball, is also having early success with six TD passes and zero interceptions.

“I think it just depends on what your experience is and those types of things," Swinney said.

“I do see it improving as the season goes on," Babers said. “As the practices build up and they get more consistent in knowing what those young men (receivers) like and where they want the football, I think you’ll see the touchdowns go up and the interceptions go down.”