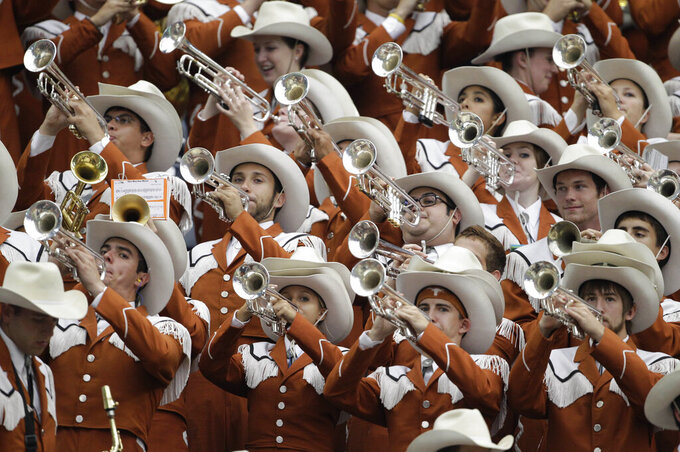 FILE - In this Saturday, Sept. 4, 2010 file photo, Members of the University of Texas Longhorn Band perform during the NCAA football game against Rice in Houston. Texas announced Wednesday, May 19, 2021, the hiring of Cliff Croomes, assistant director of bands at LSU, who will take over the Longhorn Band starting June 1. He replaces Scott Hanna, who had been in the role since 2015. Croomes is the 15th director of the band that was founded in 1900.(AP Photo/Pat Sullivan, File)

AUSTIN, Texas (AP) — The University of Texas has hired the first Black director of the Longhorn marching band one month after it announced the band will be required to perform “The Eyes of Texas” school song that has drawn sharp criticism over racist elements in its past.

Cliff Croomes, assistant director of bands at LSU, will take over the Longhorn Band at his alma mater starting June 1, Texas announced Wednesday. He replaces Scott Hanna, who had been in the role since 2015. Croomes is the 15th director of the band that was founded in 1900.

Croomes inherits an ongoing controversy over the decision to keep playing the school song. A group of Texas athletes and students last summer called for the song to be dropped amid racial injustice protests after the killing of George Floyd. School President Jay Hartzell, backed by the Board of Regents, said the song would stay. Some band members had reportedly refused to play it.

A university report in March concluded there was “ no racist intent ” behind the song, despite its roots in early 1900s minstrel shows with musicians often in blackface. The school of music said in April the marching band and pep band will be required to play the song, and a separate band will be created for music students who don't want to perform it.

Both the report and the announcement that the song would be a band requirement drew fierce criticism from the Texas chapter of the NAACP and other minority activists, as well as some Black state lawmakers.

“I am thrilled to return to my Longhorn roots at The University of Texas at Austin,” Croomes said in a statement released by Texas that did not address the song controversy. “I have a long history with the Longhorn Band, and it’s a dream come true to lead this program."