Top of his game: CU's Broussard shines after 2 knee injuries 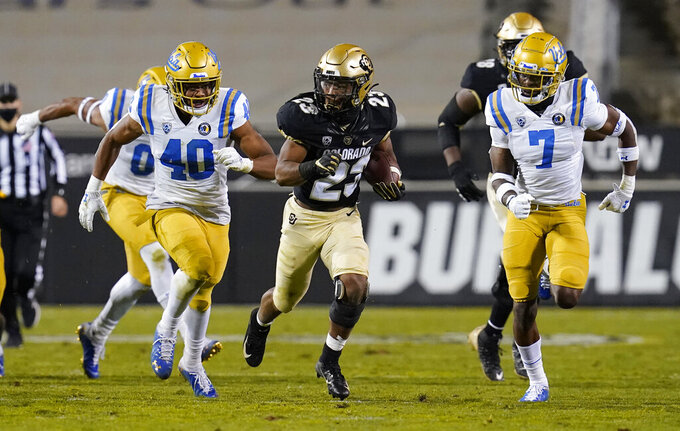 BOULDER, Colo. (AP) — The story of how tailback Jarek Broussard wound up at Colorado began with a cabin in the mountains.

It was there, on a church trip in high school, that he was awed by the surrounding scenery. It was then the dynamic playmaker from Dallas plotted a return to a similar sort of setting.

Broussard followed that trail all the way to Boulder, where he had his own mountain to climb in returning from knee injuries. That's what made this all the more rewarding: 187 yards rushing and three scores in his Buffaloes debut as they beat UCLA 48-42 to kick off the season.

His 208 total yards Saturday were the most for a Colorado tailback in his first game, the school said.

“I was determined to get through (the knee injuries), because it would make the story even better,” said Broussard, the redshirt sophomore who was named the Pac-12 offensive player of the week. “As you can see, it’s paying off.”

Broussard was filling in for an injured Alex Fontenot, who was the team's leading rusher a season ago. The Bruins weren’t prepared for the bruising style of the 5-foot-9, 185-pound Broussard, who pinballed, dipped and spun his way to an epic performance.

"(There is) perseverance for sure for Broussard,” said Dorrell, whose team plays at Stanford on Saturday. “He hasn’t played in a while and for him to have the game he had and the confidence in how hard he ran, that just tells you a lot. He was having a great camp and was so consistent, so effective, and so efficient. You saw all of that.”

The accolades from the league didn't go unnoticed, especially by his family. The “Broussard Family Group Chat" repeatedly buzzed his phone with congratulations.

With good reason — he's overcome quite a bit in his young career. First, a torn left ACL in his senior season of high school and then another season-ending injury to the same knee in September 2019.

“All those experiences I use as motivation,” Broussard said.

Broussard was a do-it-all type player at Bishop Lynch High School in Texas. As a senior, he rushed for 745 yards and 10 TDs, caught passes (22 receptions), played defense (recorded a sack) and ran back kicks (including an 85-yard TD return). His team lost to St. Pius X in the semifinals of the D1 TAPPS Playoffs in Texas. During the game, Broussard said he took a blow to the leg and couldn't put any weight on it. He suffered a torn ACL.

He already had offers from all over. But when Colorado invited him in for a visit, he was eager for the chance. The view of the Flatirons in Boulder awed him, just like that time in the mountains with his church group.

Broussard redshirted his first season with Colorado. In 2019, he was all set to play a role, but hurt his knee again just before the season started.

“My teammates were there for me to uplift me, to keep my head up,” Broussard said.

This season, the starter was set to be Fontenot. Only, he got hurt leading up to the opener in this abbreviated season.

In stepped Broussard, whose first career carry went for four yards and his long run for 37. He averaged six yards a carry to lead an offense that includes senior QB Sam Noyer, who was also making his first career start. Noyer threw for a touchdown and ran for another.

“Early in the game we told each other that we had to depend on each other," Broussard said. “We just got comfortable.”

The success of Broussard was no surprise to receiver Dimitri Stanley, who was part of the same recruiting class.

“I expected exactly what he did,” said Stanley, who had six catches for 66 yards and recovered a game-sealing onside kick to preserve the win over UCLA. “He’s just a great character on and off the field. I was truly happy for him after seeing him perform like that after being out. I’ve been saying he’s a heck of a running back since day one, so it was nice to finally see him go out there and do his thing.”

NOTES: James Stefanou, the 33-year-old kicker for the Buffs, announced his retirement due to nagging ailments. He ended his career as one of the most accurate kickers in Colorado history. Stefanou made all five of his extra points, but missed two field goals (one blocked) in his last game Saturday.