Undefeated No. 24 Aztecs look for revenge against Spartans 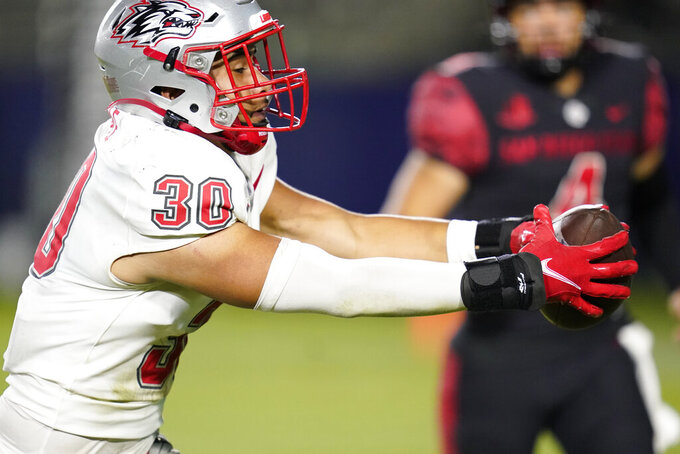 New Mexico linebacker Ray Leutele (30) runs to the end zone for a touchdown after recovering a fumble by San Diego State running back Greg Bell during the second half of an NCAA college football game Saturday, Oct. 9, 2021, in Carson, Calif. (AP Photo/Ashley Landis)

Line: San Diego State by 8 1/2, according to FanDuel Sportsbook.

San Diego State is off to its second 5-0 start since 1975 and is looking for revenge after a 28-17 loss to San Jose State last year that helped the Spartans win the conference title. The Aztecs were held to a season-low 2.2 yards per carry. The Spartans, the surprise team of 2020, are coming off a 32-14 blowout loss to Colorado State.

San Diego State senior running back Greg Bell against a San Jose State defense that is allowing 160 yards rushing per game. Led by Bell, the Aztecs are averaging 244 yards rushing per game, 10th in the nation. Bell returned from an injury to run for 111 yards and one touchdown in a victory against New Mexico. He's rushed 94 times for 520 yards, a 5.5-yard average, and five touchdowns.

SDSU: Punter/placekicker Matt Araiza continues to lead the nation in punting with a 54.1-yard average. He is 3.08 yards ahead of the record of 50.98 set by Texas A&M’s Braden Mann in 2018.

SJSU: Nick Starkel, last year’s All-MWC quarterback, has missed the last two games with injuries, and coach Brent Brennan won’t say whether Starkel or Nick Nash will start. Nash has thrown five TD passes the past two weeks and had two touchdown passes and the go-ahead TD run in last year’s win at San Diego State after Starkel left early with an injury.

Besides his punting prowess, Araiza has been perfect on 23 extra points and has made five of eight field goal attempts. ... SDSU joins Army as the only teams to rank in the top 10 in both rushing offense and rushing defense. ... The Aztecs rank second nationally allowing 50 yards rushing per game and are eighth with 244.4 yards rushing on offense. ... The Aztecs haven’t allowed a rushing touchdown this season. ... The Spartans have alternated wins and losses through six games and committed three turnovers in a 32-14 loss at Colorado State.