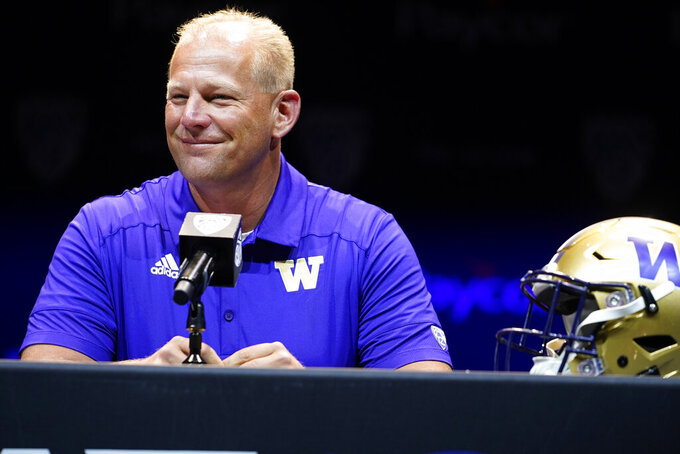 Line: Washington by 21 1/2, according to FanDuel Sportsbook.

Kalen DeBoer makes his debut as Washington’s third head coach in four seasons. DeBoer led Fresno State to a 10-3 record last season and his innovative offensive system put him on the radar of several power programs. DeBoer replaced Jimmy Lake, who was fired after less than two seasons. Kent State was 7-7 last year, won the MAC East Division and lost to Northern Illinois in the conference championship game. The Golden Flashes return their top rusher and top wide receiver but will be breaking in a new starting quarterback.

Kent State’s speed vs. Washington’s defense. The Golden Flashes play an up-tempo offense. They averaged nearly 500 yards per game last season in part because it averaged 75 plays per game. Kent State was one of 11 teams nationally to run more than 1,000 offensive plays. How quickly the Golden Flashes will be able to play depends on how new quarterback Collin Schlee adjusts to being the full-time starter. Schlee was the backup last season and appeared in eight games. Washington’s defense has a number of players stepping into bigger roles.

Kent State: RB Marquez Cooper returns after rushing for 1,205 yards and 11 touchdowns last season. Cooper was third in the MAC in rushing and second in carries with 241. He rushed for more than 100 yards seven times and had the eighth most yards rushing in school history.

Washington: QB Michael Penix Jr. transferred from Indiana, where he played under DeBoer in 2019. Penix beat out Dylan Morris and Sam Huard to win the starting job with the Huskies. Penix’s issue in the past has been injuries. He hasn't played more than six games in any season.

The opener starts a brutal first month for Kent State that also includes games at No. 9 Oklahoma and at No. 3 Georgia. ... The schools share a major connection — legendary Washington coach Don James was hired by the Huskies after serving as the head coach at Kent State from 1971-74. James won six conference titles and four Rose Bowls at Washington. ... Sixth time in the past seven seasons Kent State is opening on the road against a Power Five team. ... Kent State LB Edefuan Ulofoshio (knee) is out until at least midseason. ... Washington went 2-5 at home last season, the most home losses since going 0-7 in 2008. ... Washington’s first meeting with a MAC opponent since 1991 when the Huskies beat Toledo on their way to an undefeated season and a share of the national title.