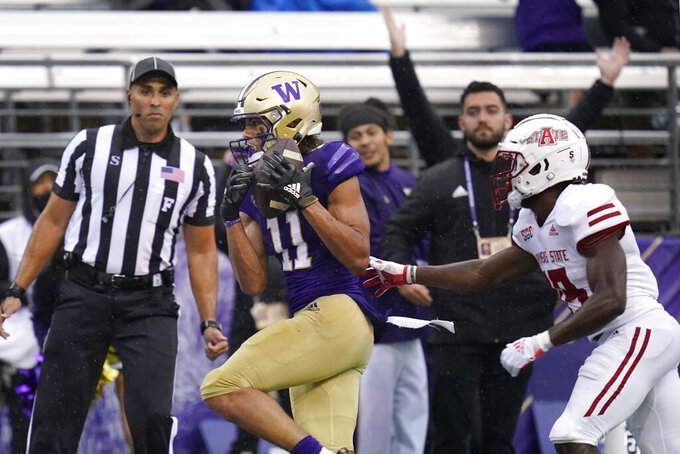 SEATTLE (AP) — After two weeks of criticism, questions and overall misery, Jimmy Lake finally saw a little bit of enjoyment on the Washington sideline as the time ticked away on a blowout victory.

In the process, the Huskies may have found some answers to their shocking offensive woes from the opening two games.

“Our guys stayed together, stayed united, and so it was awesome just seeing the joy in their eyes,” Lake said.

Dylan Morris passed for 367 yards and three touchdowns, Jalen McMillan had 10 catches for 175 yards and a score, and Washington rebounded from two disappointing losses with a 52-3 win over Arkansas State on Saturday.

After losing stunningly to Montana to open the season and getting run over last week at Michigan, the Huskies (1-2) needed a convincing performance to stop the season from spiraling away before the beginning of Pac-12 Conference play.

They got it thanks to an offense that jolted awake after sleepwalking for two games, and a defense that shut down Arkansas State’s high-powered unit that scored 50 points in a loss last week.

Morris pushed his throws downfield and had the best passing day of his young career, topping 300 yards for the first time in seven career starts. McMillan was his favorite target, becoming the first Washington pass catcher with 10 or more receptions since Andre Baccellia had 12 in the 2019 Rose Bowl against Ohio State. McMillian had a 33-yard TD catch early in the second quarter that gave Washington a 28-0 lead.

Sean McGrew had touchdown runs of 13 and 2 yards after not playing in the first two games. Morris also threw a 13-yard TD to Cade Otton, the first of four straight possessions that ended in Huskies touchdowns after going three-and-out on their opening possession and receiving a chorus of boos. Morris capped his day with a 42-yard TD to Terrell Bynum early in the fourth quarter.

Washington also had a 72-yard fumble return for a score by Bralen Trice in the fourth quarter.

The offensive outburst will be a brief reprieve for embattled offensive coordinator John Donovan after the lethargic offensive performance in the first two games. But the real test of whether Washington has been able to make a dramatic change will come when Pac-12 play begins next week.

“We all know we haven’t played good football so far and even today we were talking like we can get so much better,” Morris said. “We were feeling OK with those points and everything but we could still do so much better.”

Arkansas State’s offense put up huge numbers through the first two weeks against Central Arkansas and Memphis. The Red Wolves (1-2) found it much tougher to find the end zone against Washington.

After splitting time with quarterbacks the first two weeks, the Red Wolves went almost exclusively with James Blackman, who threw for 176 yards but was just 16 of 38 passing. Blackman threw for 306 yards and four TDs last week after taking over for Layne Hatcher. Hatcher threw four TDs in the season opener against Central Arkansas. He took over in the fourth quarter against the Huskies.

“When you play a quality opponent like Washington, everything is magnified. Every critical mistake you make – not being locked in, not trusting your keys, not reacting,” Arkansas State coach Butch Jones said. “We have to go back and look at all that. All this is on me."

Donovan called the offense for Saturday's game from the press box rather than on the field as he had last year and through the first two games this season. Lake said part of the reason Donovan was on the field previously was still learning players and how they'd react to situations.

“I do think it is a more calm atmosphere and in a lot of ways easier to call it from the booth. You can see it better and I think you saw that tonight,” Lake said.

Washington: Highly touted Washington freshman QB Sam Huard made his college debut in the fourth quarter. His first completion was a 23-yard strike to Giles Jackson to convert on third-and-long. The blowout win was a perfect time to get Huard some snaps. And Morris’ performance will quiet, for now, the debate about any quarterback controversy.

Arkansas State: The Red Wolves are at Tulsa next Saturday.