After 15 years of waving the flag, Wazzu gets 'GameDay' 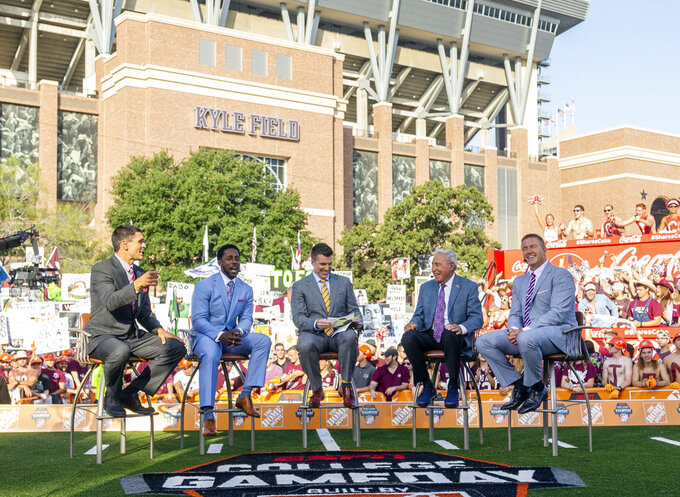 FILE - In this Sept. 8, 2018, file photo ,ESPN College Game Day's crew sits on set in front of Kyle Field in College Station, Texas. before the start of an NCAA college football game between Clemson and Texas A&M. After 15 years of the Washington State flag begin a backdrop fixture to every “College GameDay” broadcast, ESPN is going to Pullman Wash., on Saturday.(AP Photo/Sam Craft, File)

Long before the sun rises over the rolling hills of the Palouse, the fans in crimson and gray will make their pilgrimage. They'll come stumbling out of RVs parked the night before in nearby lots. They'll walk through campus past the Bryan Clock Tower or make the hike up College Hill

They'll don jerseys bearing the names Leaf, Thompson, Bledsoe, Gleason and they'll display the number "3" in memory of quarterback Tyler Hilinski. They'll carry signs disparaging Dawgs to the West and Ducks to the South. They'll celebrate the "Popcorn Guy" and the "Fireball Chugger."

And flags. Oh, will there ever be flags. Crimson. White. Gray. Black. All with the unmistakable Cougars logo. And the most famous of those flags — Ol' Crimson — will be front and center.

ESPN's "College GameDay" is coming to Pullman on Saturday ahead of No. 25 Washington State's Pac-12 showdown with No. 12 Oregon and it could be unlike any setting ever for college football's version of Woodstock.

After 15 years of the Washington State flag being a backdrop fixture for every "College GameDay" broadcast — from Tempe to Tallahassee, Boise to Blacksburg — Ol' Crimson will finally come home when the broadcast goes live in the early morning hours from the intersection of Cougar Way and Ferdinand's Lane in the shadow of Martin Stadium.

"When we go to a place that we've never been to, it's guaranteed to be electric," said Lee Fitting, ESPN's vice president of production. "Starting the show in the dark is cool. I just picture a dark fall morning, there could be some mist or fog and thousands of flags sort of dimly lit. It's going to be a really cool on-air moment."

The show's trip to Pullman is the realization of a dream for many: For the founders of Ol' Crimson who created a movement that made sure the flag was flying at every broadcast since October 2003 and for Washington State fans who have made getting the show to the campus a collective mission.

"Even though I was the first one to start it and keep it going, I'm still amazed that something I thought of 15 years ago, did 15 years ago, would have this kind of effect," said Tom Pounds, who started the tradition of flying the flag in 2003. "It still amazes me."

What began as an attempt to draw attention to the school and lure the show to Pullman carries far deeper meaning for Washington State students, alums and fans. Ol' Crimson flying in the background of each of the past 216 GameDay broadcasts is a public representation of the bond created by being a Coug.

It's not easily explained.

Washington State is defined by its remoteness. Dealing with isolation at the school some 290 miles east of Seattle is part of the curriculum. Pullman is not a destination location, yet it becomes the foundation for a relationship between the students, the campus and the community that spans generations and creates inseparable bonds.

"There's something in the DNA of a Coug. ... There is a bond like none other, I would argue, and I gauge it on walking through the airport, wearing the Coug logo and how many 'Go Cougs' I get," Chun said. "I tell people there are less than a dozen schools around the country where you verbally hear that."

The early days of Ol' Crimson came during some of the worst years in Washington State's football history. Between 2004 and 2014, the Cougars never won more than six games. Between 2008 and 2012, Washington State's combined record was 12-49. Now they've become relevant again, going to four bowl games in five years under Mike Leach. This week, the Cougars returned to the AP Top 25.

"It was kind of funny because they were so bad for so long it was like, 'What the hell is the Wazzu flag doing here?'" Fitting said. "We showed it as a bit of a spoof and had some fun with it. Then it was, this is turning into a thing. Over time, as I like to describe it, the flag signifies college football. Its tradition. Its pageantry and its passion. And that's what makes college football great. And that's what makes the flag behind GameDay great. Because people are passionate about it. They're making an effort to fly it. We recognize it."

Fitting said there were a few times the show came close to a Pullman trip. The closest was Halloween 2015 when the Cougars were hosting Stanford in a game key to the Pac-12 North race. The show ended up going to Notre Dame at Temple that week in Philadelphia, in part because the broadcast came from in front of Independence Hall.

"We would have gone to Pullman if we didn't get the desired location in Philadelphia. And mid-afternoon on Monday, the mayor's office called and said you're good to go with your location," Fitting recalled. "And Wazzu was left out and I got absolutely lambasted on social media."

There are no more campaigns for the Cougs to take on. When the "College GameDay" equipment arrived in Pullman on Wednesday, it was greeted by a police escort and thousands of fans.

And while Ol' Crimson is coming home this Saturday, it'll be back out on its college football road trip next week.

By The Associated Press 5 hrs ago
By Ralph D. Russo 6 hrs ago
7 hrs ago
By Dave Skretta 8 hrs ago
By Caroline Pineda 9 hrs ago