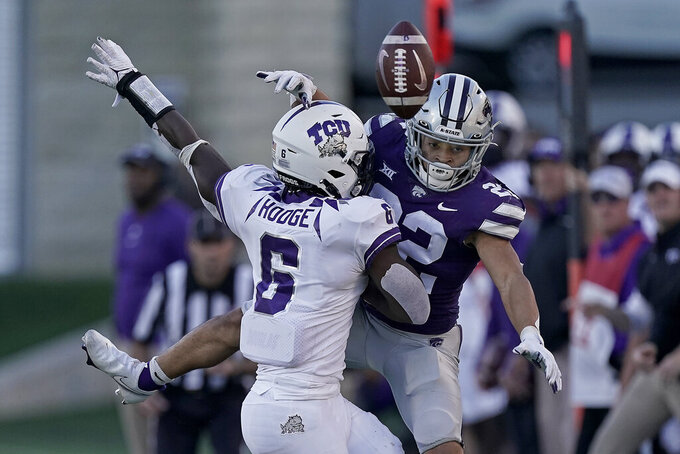 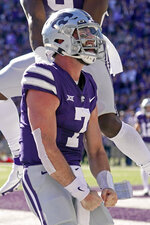 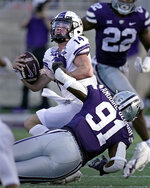 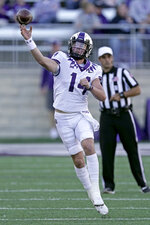 MANHATTAN, Kan. (AP) — After watching Kansas State's Felix Anudike-Uzomah seemingly match a Division I record with six sacks in a 31-12 victory over TCU on Saturday, coach Chris Klieman made an observation that should send chills through Big 12 quarterbacks.

Or heart palpitations through NFL scouts.

“I'm sure there's things he can continue to improve and get better at,” Klieman said with a slight grin and shake of his head, before adding quickly: “But you have that special day, that's pretty awesome.”

About two hours after the game ended, though, the NCAA announced two of the sacks do not count because they resulted in fumbles that went beyond the original line of scrimmage. By rule, those plays must be counted as rushes by the QB.

Regardless, the four sacks that did count still represented a banner day for Kansas State's burgeoning defensive star.

“Stay hungry and keep doing what I’m doing in practice, honestly,” Anudike-Uzomah said. “This is one game. It’s not the end of the season. I need to work hard and work on technique so I can pile on and pile on.”

Only three other players in the NCAA's highest division have had six sacks, including longtime NFL star Elvis Dumervil.

“How could you not be excited for the kid?" Klieman said. “He set all sorts of records today, and every single one of them was critical play in a tight ballgame. Felix earns it. He works his tail off every single day.”

The Horned Frogs' Max Duggan was just 9 of 13 for 73 yards before getting benched in the third quarter, and Chandler Morris was 9 of 14 for 111 yards in relief. Kendre Miller ran for 102 yards, but most of it came on a 61-yard scamper.

“Max hasn't been able to do a lot of stuff in practice. We just finally, running-wise, needed someone that could get out and get going,” TCU coach Gary Patterson said. “That's what we needed.”

Tempers flared midway through the third quarter when the Horned Frogs' Josh Foster delivered a big hit on Thompson as he stepped out of bounds. Players from both teams joined the melee as TCU coaches tried in vain to intervene; two of their players and one from Kansas State were ejected for throwing punches.

The Horned Frogs' frustration probably stemmed from the fact that they actually drove inside the Kansas State 5 on three occasions — two times in the first half and one in the second — and came away with a total of three points.

The first drive reached the Kansas State 3 before Duggan threw a pass that went for a 4-yard loss and TCU had to kick a field goal. The second made the Kansas State 2 but, after three runs gained a single yard, it ended when Duggan threw his fourth-down pass out of the back of the end zone for an incompletion.

The silver lining for the Horned Frogs? They stuffed Vaughn on the next play for a safety.

Otherwise, the first half belonged to the Wildcats, who never punted in five possessions — though Thompson did throw a pick and the safety ended another. The other three ended with Thompson's TD run and Vaughn's two scores.

Vaughn's second came after the Wildcats marched 88 yards in the closing minutes of the first half. The big play was a 37-yard pass to Phillip Brooks that was initially ruled a touchdown, but officials spotted the ball just outside the goal line after a review. The change merely gave Vaughn a chance to somersault over the pile for a highlight-reel score.

The Horned Frogs marched deep into Kansas State territory again early in the second half. But an end-around pass on third down was incomplete and Anudike-Uzomah's fourth-down strip-sack of Morris was grabbed by the Wildcats' Daniel Green in the end zone for a touchback.

“That's what he does,” defensive back Reggie Stubblefield said of the Wildcats' sophomore defensive end, who now has 12 sacks on the season. “He just constantly gets after it every play.”

Thompson hit Daniel Imatorbhebhe with a 73-yard touchdown pass early in the fourth quarter to put the game away.

“I thought we had a really good game plan,” Klieman said. “We talked to our guys about getting better over the last few weeks and I feel like we are getting better after going through a little bit of a rut.”

The Horned Frogs played without leading rusher Zach Evans, who sustained a turf toe injury Oct. 9 against Texas Tech. He missed TCU's game against Oklahoma before running for 62 yards in last week's loss to West Virginia, but showed up in Manhattan in a walking boot and watched from the sideline.

Kansas State held the Red Raiders to 103 yards while keeping them out of the end zone in the second half last week, a sign their defense had stepped up. It took a giant lead with a dominant performance against the Horned Frogs.

TCU plays No. 16 Baylor next Saturday in its second home game in more than a month.