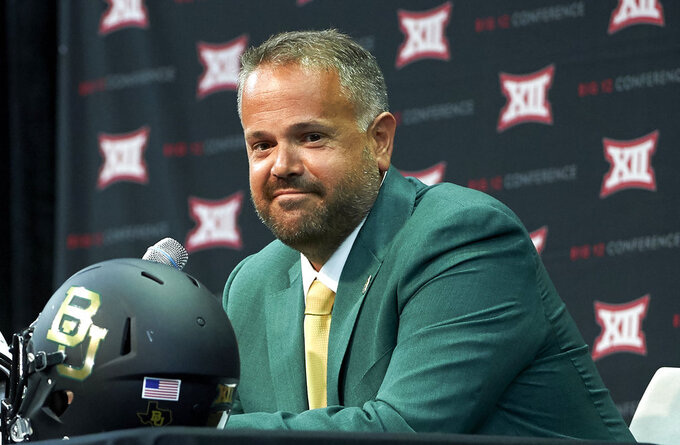 FILE - In this July 17, 2018, file photo, Baylor head coach Matt Rhule speaks during the NCAA college football Big 12 media days, in Frisco, Texas. The Big 12 board of directors has unanimously approved and adopted an independent verification report that says Baylor has implemented recommendations for reforming its Title IX process after a campus sexual assault scandal broke more than two years ago. With the board’s action Tuesday, Oct. 30, 2018, the Big 12 will no longer withhold a portion of Baylor’s share of revenue distribution. (AP Photo/Cooper Neill, File)

IRVING, Texas (AP) — Big 12 Conference directors have unanimously endorsed an independent report that found Baylor has implemented more than 100 recommendations for reforming its Title IX procedures after a sexual assault scandal rocked the campus more than two years ago.

The decision, announced Tuesday, means the Big 12 will no longer withhold part of Baylor's share of conference revenue. Nearly $14.3 million has been withheld over the past two academic years; that money won't go directly back to the school, which will be fined $2 million by the conference.

"We have come to this point because of the fact that we really feel that they have made such tremendous progress," West Virginia President and board chairman Gordon Gee said. "Those are a lot of recommendations. Some of them will take time, but we'll have a continuing monitoring process."

The Big 12 last year started withholding 25 percent of revenue payments to Baylor pending verification of the 105 changes recommended by Pepper Hamilton, the firm that handled the initial investigation in 2016. The scandal led to the departures of school President Ken Starr and athletic director Ian McCaw. Art Briles, a two-time Big 12 champion football coach, was fired.

"We are appreciative of the Big 12's recognition of the significant progress that has been made across the Baylor campus, as well as of our unwavering commitment to the safety and security of our students," Baylor President Linda Livingstone said.

Baylor is still waiting for the outcome of an NCAA investigation into the scandal .

Oklahoma State President Burns Hargis, chairman of the committee overseeing the Big 12's verification effort, said the goal was not to look back at what transpired at Baylor, but rather to look forward with a thorough third-party review that the recommendations were implemented, and to ensure compliance with all Big 12 bylaws.

Livingstone said it was the second independent verification, and that the recommendations have already helped the university in Waco prevent and respond to reports of sexual assault and interpersonal violence.

Of the nearly $14.3 million withheld from Baylor, about $1.65 million will be reimbursed to the league to cover legal costs. The remaining money, about $12.6 million, will be invested for the next four years. The net earnings from that will be distributed annually in equal portions to all 10 conference schools to be used for funding anti-violence and anti-harassment efforts on campus and in athletics.

At the end of four years, the Big 12 board of university presidents and chancellors will determine the amount of money returned to Baylor, minus the $2 million fine for "reputational damage to the conference and its members."

Big 12 Commissioner Bob Bowlsby said the fine "represents the collective concern of the membership regarding the negative publicity that this has cast on the Big 12 and the member institutions." He said the fine would likely be split among the other nine schools.

The report done by Polsinelli PC was intended to legally assess whether Baylor had followed through on recommendations adopted by Baylor regents in May 2016.

"The verification team is of the opinion that Baylor has in all material respects structurally completed and practically implemented the (105 Pepper Hamilton) recommendations as of the date hereof," reads the report, dated Aug. 31. "Whether the recommendations that require future action or are aspirational in nature will continue to be implemented in a sustainable manner will only be verifiable over time."

Polsinelli's verification team focused only on the recommendations. It did not address any legal claims or investigations into Baylor by the NCAA or other agencies, such as the Department of Education.

Baylor hired Pepper Hamilton to review how the school handled sexual assault claims after several incidents involving football players. In May 2016, the school issued a 13-page "findings of fact" that focused on the most troubling findings, including a football program that was portrayed as acting as if it was above the rules. The document suggested that some staff interfered with investigations and witnesses.

Briles, who was paid $15 million by Baylor to settle his contract after his dismissal, has insisted he did not cover up reports of assaults by players. He said he encouraged alleged victims to go to the police.

Baylor officials have said the investigation found that 17 women had reported incidents of sexual and domestic violence involving 19 Baylor football players since 2011, including several cases that involved gang rapes.

While Baylor has settled federal Title IX lawsuits against the school related to the sexual assault scandal, and previously settled with at least three women who hadn't sued, other lawsuits are pending.