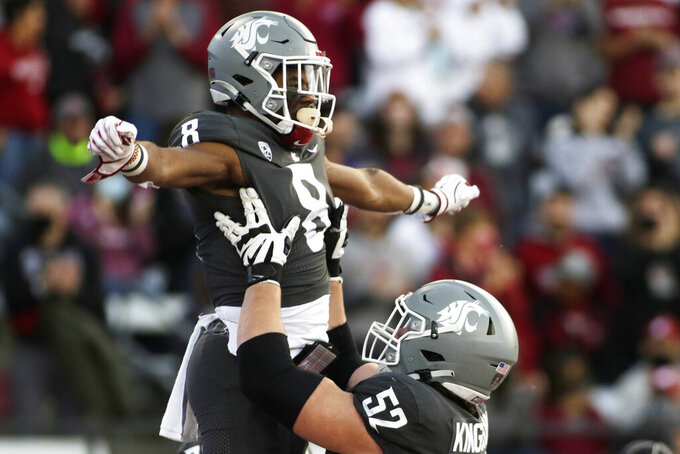 PULLMAN, Wash. (AP) — Max Borghi scored on a 2-yard run with 1:30 left in the game as Washington State came back to beat Stanford 34-31 on Saturday in what was possibly the last game for WSU coach Nick Rolovich because of his refusal to get a COVID-19 vaccination.

The state of Washington has set a deadline of Monday for all public employees — including the Cougars' coach — to be vaccinated against the coronavirus. Rolovich has applied for a religious exemption and his future with the team hangs on the answer.

Rolovich, who is the highest paid state employee at more than $3 million per year, has refused to be vaccinated for unspecified reasons, in defiance of Washington Gov. Jay Inslee's mandate. He is the only unvaccinated coach in the Pac-12.

“I'm going to come to work tomorrow and get ready for BYU,” Rolovich said after the game. “This is not in my hands.”

Borghi's winning score was set up by a 41-yard pass reception by Calvin Jackson Jr. Borghi finished with 89 yards rushing and two touchdowns.

“It's good to get Max involved,” Rolovich said. “I'm proud of him.”

“He was really mistake-free,” Rolovich said of his sophomore quarterback.

The Cougars came to life in the second quarter as de Laura threw touchdown passes of 32 yards to Travell Harris, 31 yards to Jackson and 10 yards to De'Zhaun Stribling for a 20-13 lead.

Borghi powered over from the 2 late in the third quarter to lift WSU to a 27-16 lead.

But the Cardinal replied with a 74-yard drive. McKee pushed into the end zone from the 1 early in the fourth, then ran in the two-point conversion to cut Washington State's lead to 27-24.

After a Washington State punt, Stanford drove 85 yards and took a 31-27 lead on McKee's 8-yard scoring pass to Jones with 7:32 left in the game.

Washington State got the ball back on its 30 with 3:26 left. De Laura marched them down the field and Borghi scored the winning points with 1:30 left.

“We gotta move forward, continue to push ourselves, and get back healthy. I know we’ve got the pieces we need to win games,” Jones said.

Rolovich said he does not know what will happen next week, but he has gotten used to the uncertainty after months of speculation about his future. He said he is waiting for a message from Athletic Director Pat Chun regarding his future. “I believe this is gonna work out in the right way,” Rolovich said, adding that meant him remaining as coach of the Cougars. “I got faith in it.”

Stanford: After playing four of their first seven games on the road, the Cardinal play four of the next five at home. The Cardinal seemed to have control when they scored the first 15 points of the fourth quarter, but could not hold the lead.

Washington State: The Cougars are playing the best football of Rolovich's two-year tenure.

Stanford has a bye next Saturday before hosting Washington on Oct. 30.