Column: Bowden made everyone feel like a Hall of Famer, too 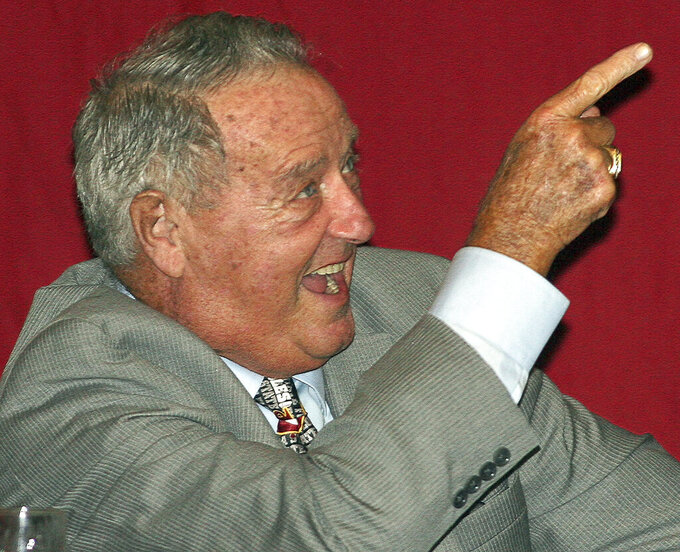 FILE - In this July 15, 2009, file photo, Florida State football coach Bobby Bowden laughs as he points to former FSU quarterback Chris Weinke after Weinke told a joke about him at the Bobby Bowden Roast in Tallahassee, Fla. Bowden, the folksy Hall of Fame coach who built Florida State into an unprecedented college football dynasty, has died. He was 91. Bobby's son, Terry, confirmed to The Associated Press that his father died at home in Tallahassee, Fla., surrounded by family early Sunday, Aug. 8, 2021. (Phil Sears/Tallahassee Democrat via AP, File)

Bobby Bowden's greatest gift was making everybody he met feel like a Hall of Famer, too.

The patriarch of Florida State football and the coach who built a dynasty from scratch died at 91 on Sunday at his home in Tallahassee, Florida. The end came a little more than two weeks after Bowden's family revealed publicly he had pancreatic cancer.

Bowden's resume is among the greatest in the history of the game, with 377 wins, a dozen Atlantic Coast Conference championships and national titles in 1993 and 1999. His death brought an outpouring of tributes and memories from those whose life he impacted with acts of kindness, humility and levity.

Alabama coach Nick Saban recounted how Bowden, when he was head coach at West Virginia in the mid-1970s, reached out to him after Saban's father died.

“Coach didn’t know me from Adam’s house cat, but he knew my Dad and got word that maybe my Mom was struggling a bit back home in West Virginia,” Saban wrote in a social media post. If Saban needed to be closer to his mother, Bowden said, he would make room for him on his staff.

South Carolina coach Shane Beamer, the son of another Hall of Famer, former Virginia Tech coach Frank Beamer, recalled how he would write letters to established coaches when he was young and aspiring to follow in his father's footsteps.

“I wrote hundreds of them,” Beamer wrote. “Very rarely heard back from any of them. I ALWAYS got a response from Coach Bowden.”

If you covered college football over the last 40 years, you almost certainly had the opportunity to speak with Bowden. His home phone number was listed. If you could catch him there, he was usually happy to give a few minutes — and a great quote or two.

The first time I met Bowden was at a Florida State practice in Tallahassee in September 2005. We chatted on his golf cart as the team worked out. Yes, the coach — one of the most accomplished in the history of the game at that point —- gave an interview to a reporter he had never met before DURING practice. He even worked in a “Dadgummit," as I recall.

Bowden was among the last college football coaches who didn't guard the program like a fortress. He seemed to understand that you could be intensely competitive while not taking yourself or the job too seriously.

He asked about me and where I was from. He was affable and charming as I asked him, essentially, do you think it might be time to retire? Bowden said he would know when it was time to go.

At this point in his career, Bowden's program was slipping from its lofty heights. After a record 14 straight seasons finishing ranked in the top five of the AP poll, the Seminoles reached 10 victories just once from 2001-04.

Crossing paths with Bowden over the years or calling him at home, I found it remarkable how he never seemed to forget a name or a face. Of course, he called everybody “Buddy,” so maybe he wasn't so good with the names. Whatever the case, it didn't matter if you had met him before. He treated everyone like an old friend.

“He was so normal," said Texas A&M coach Jimbo Fisher, who succeeded Bowden at FSU. “He could make you feel like you knew him for 20 years in the first two minutes you ever talked to him.”

In 2010, after Florida State not-so-subtly nudged Bowden into retirement, he released a book, “Called to Coach: Reflections on Life, Faith and Football.” As part of the promotional tour, Bowden passed through New York and stopped at The Associated Press to give an interview.

Bowden wanted to make sure everybody knew his resignation was not his choice.

Bowden smiled and laughed through much of the interview. He made clear he was a hurt, but not bitter.

For most of the next 10 years, Bowden traveled the country, speaking about his faith, played golf and enjoyed his grandchildren with his wife of 72 years, Ann.

While Bowden would half-jokingly talk about how there was only one big event left in life after retirement and he wasn't in a rush to get there, it turns out he had plenty left to accomplish.

Back in 2010, when I asked Bowden how his first few months as a former coach were going, he said it was great because every day was like Saturday: You're off today and you're off tomorrow.

Of course, for most of his life Saturdays were a workday, but the description jumped out. My retired dad had been using it for years. I told Bowden that and he asked about my father, a former New York City bus driver now residing in Florida.

Bowden grabbed one of his books and signed it to my dad: “Everyday is like Saturday because we're retired!”

To Bobby Bowden, he and the former bus driver had a lot in common.