With eye on Bama, No. 1 Georgia favored against Georgia Tech 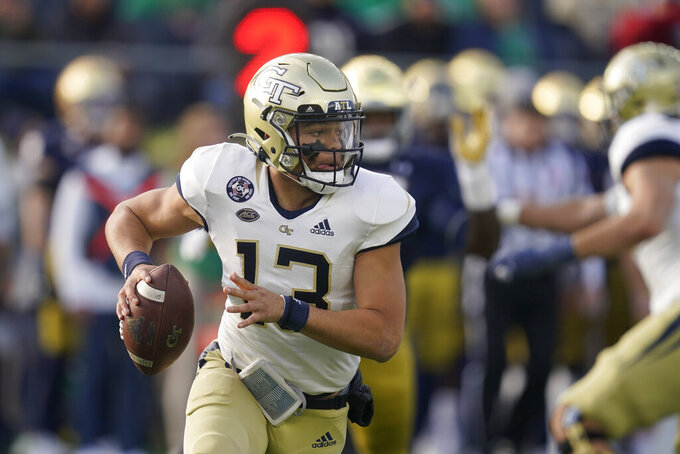 ATLANTA (AP) — Make no mistake, No. 1 Georgia has more than one rivalry showdown in Atlanta in its sights.

The Bulldogs will attempt to cap an undefeated regular season when they visit Georgia Tech on Saturday in the battle for state bragging rights.

Georgia (11-0) is playing for more than a state championship this season. It can't escape the shadow of another big game the following week. The Bulldogs will play No. 3 Alabama in the Southeastern Conference championship game on Dec. 4, when each team also will be trying to position itself for a spot in the College Football Playoff.

No warnings from coach Kirby Smart can keep Georgia players from looking ahead to Alabama. Evidence came when linebacker Channing Tindall was asked earlier this week about the team's upcoming rivalry game in Atlanta.

“Well, Alabama, 0-2 record right now,” Tindall said. “We’re trying to change that. We’ve got to do what we’ve got to do. We’re going to come in there right now and focus on Georgia Tech. Take it one step at a time, but when that time comes, I can speak more on it.”

When told the rival being asked about actually was Georgia Tech, Tindall looked surprised.

“Oh, I thought you were talking about Alabama,” Tindall said. “My fault. My fault.”

Tindall then said the Bulldogs would be motivated by “that old-fashioned hate” in the rivalry against the Yellow Jackets.

“We’ve just got to get ready for it,” Tindall said. “Also, we’re going to their place. It should be a good game.”

The oddmakers aren't expecting a close game. Georgia Tech (3-8) has lost five consecutive games, including last week's 55-0 loss at No. 6 Notre Dame. Georgia is favored by 35 1/2 points over the Yellow Jackets, according to FanDuel Sportsbook.

The Yellow Jackets are trying to avoid their third three-win finish in as many seasons with coach Geoff Collins. On Tuesday, Collins acknowledged more competitive losses before last week were not enough to avoid "possible fan frustration, donors, boosters, all those things.”

It would not be a surprise if Collins considers changes to his staff when he evaluates the season on Sunday. He also said he knows 2022 will be a year he must produce a better record.

“... Sunday, that will be a big day of evaluation and figuring out ways that next year that we’re not close again but it will be time to take that next step and push over the hump,” Collins said.

Georgia has won the last three games, and nine of the last 11, in the state rivalry. The teams did not play last season. Due to the coronavirus pandemic, SEC teams played only conference games in 2020.

DOGS, TIDE HAD TOP-FIVE SHOWDOWN IN 2020

As for that other rivalry, Georgia has lost its last six against Alabama, including two in the SEC championship game and one for the national championship following the 2017 season. Tindall's reference to his senior class having an 0-2 record against the Crimson Tide included No. 2 Alabama's 41-24 home win over the No. 4 Bulldogs last season, when Mac Jones passed for four touchdowns.

Georgia has provided proof that defense doesn't slump. The Bulldogs have avoided upsets by leaning on the nation's best defense.

Georgia leads the nation with its averages of 236 yards and 7.5 points allowed per game. Tindall leads the team with 55 tackles and is one of four players with at least four sacks.

Each team has used tandems at quarterback. Jordan Yates made his fifth start last week at Notre Dame as Jeff Sims, who was in a walking boot the previous week, was in uniform but was ruled out. Despite missing four full games, Sims is third on the team with 372 yards rushing and tied for the lead with four rushing touchdowns.

Collins would not say if Sims has a chance to return against Georgia.

JT Daniels opened the year as Georgia's starter but Stetson Bennett claimed the job when Daniels missed time with a lat injury. Daniels played behind Bennett in two of the last three games. Bennett, with eight starts, has a firm hold on the job and has passed for 17 touchdowns with only five interceptions while also providing a threat as a runner.