With Florida in town, it's 'do or die' for FSU's bowl streak 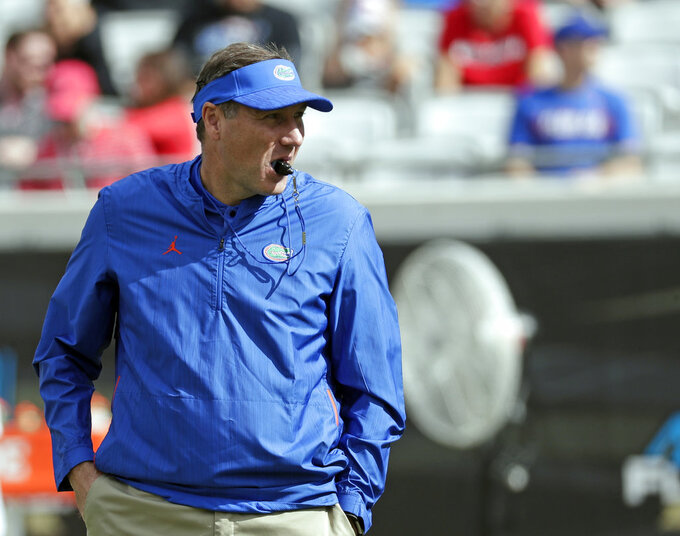 FILE - In this Oct. 27, 2018, file photo, Florida head coach Dan Mullen watches players warm up before an NCAA college football game against in Jacksonville, Fla. Florida State has a chance to salvage their season against No. 13 Florida (8-3, No. 11 CFP) in Tallahassee, Fla., on Saturday, Nov. 24. (AP Photo/John Raoux, File)

Willie Taggart's first season at Florida State has been mostly a mess.

All those flaws have led to a 5-6 record that would be worse if not for late-game fortunes against Samford, Louisville and Boston College.

Still, the Seminoles have a chance to salvage their season against No. 13 Florida (8-3, No. 11 CFP) in Tallahassee on Saturday. Florida State can extend the nation's longest bowl streak — an impressive, 36-year run — with a victory against the rival Gators.

"It's do or die at this point," FSU cornerback Stanford Samuels said. "We can't afford anything else but a win, so that's all we talk about. We're going to win and we're going to beat the Gators."

The Seminoles have made a bowl game every year since 1981. Even then, they went 6-5.

Players past and present have made that clear, and Taggart has embraced the importance of the bowl streak.

"You want every game to be that way for your players, not just the last game or just a rivalry game," Taggart said. "It's the most important game because it's the next game, it's the last regular-season game. ... I guess you can say it's important for a lot of reasons, different reasons, and our guys understand that."

Florida has plenty on the line as well. The Gators need a victory to lock up a spot in a New Year's Six bowl, likely the Peach or the Fiesta, and are trying to end their longest losing streak in series history.

Florida has dropped five straight against FSU, meaning no one on coach Dan Mullen's roster knows what it feels like to beat the 'Noles. That's one reason the Seminoles have been relatively confident despite getting blown out in three of their last four games.

"It's going to mean a lot," Florida defensive tackle Kyree Campbell said. "We hear them boys talking, but we don't talk. We talk with our pads, so we'll see 'em on Saturday."

FSU's streak started with the Gator Bowl in 1982 and includes eight trips to the Orange, six to the Sugar, three national championships (1993, 1999, 2013) and a few stops at now-defunct bowls.

Keeping it intact comes down to one game, as underdogs and against one of the program's biggest rivals.

"Everybody knows we've got to win this game."

Here are some other things to know about Florida and Florida State, which are meeting for the 61st consecutive year:

Mullen is 4-0 against the Seminoles, winning all four meetings while serving as the team's offensive coordinator (2005-08). The Gators outscored FSU by an average of 36-12 in those games.

Both teams feature first-year coaches for the first time since 1960, when Ray Graves began a 10-year tenure at Florida and Bill Peterson started an 11-year stint with Florida State. The Gators won that one 3-0 on Sept. 24, 1960.

The Gators have widely been hailed for rebounding from last year's 4-7 debacle. But consider this: Florida needed trick plays to beat Mississippi State and LSU, and had to rally from deficits of 18 and 17 points, respectively, to defeat Vanderbilt and South Carolina. Throw in lopsided losses to Kentucky, Georgia and Missouri, and Florida should consider itself lucky to be on the verge of a major bowl berth.