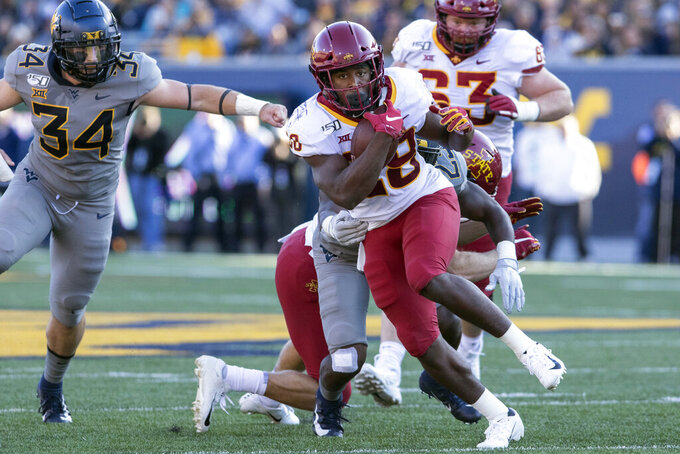 AMES, Iowa (AP) — Iowa State's success over the past two seasons helped it land freshman running back Breece Hall, who could have easily gone somewhere else given his talent.

The Cyclones saw last weekend what it's like to have someone on their own roster take over a game on raw ability.

Hall set himself apart from a muddled position group with a breakout performance, rushing for 132 yards and three touchdowns in a 38-14 victory at West Virginia. For his efforts, Hall won co-Big 12 Newcomer of the Week honors and likely the starting nod when the Cyclones (4-2, 2-1 Big 12) visit Texas Tech (3-3, 1-2) on Saturday.

"The one thing Breece does have is natural running back vision," Iowa State coach Matt Campbell said. "That vision and understanding of the offense certainly allows him ... to accelerate where he's going to go with the ball."

The 6-foot-1, 205-pound Hall, who only turned 18 on May 31, is cousins with Roger Craig, the former star back of the San Francisco 49ers dynasty in the 1980s. His stepfather, Jeff Smith, was a tailback for Kansas City and Tampa Bay.

Hall started slowly at Northwest High in Wichita, Kansas, before exploding onto the recruiting scene as a junior. Hall rushed for 2,082 yards and 32 touchdowns — on a whopping 10.3 yards a carry — for a team that made it to the state title game. Hall was even better as a senior, rushing for 2,127 yards and 29 touchdowns and catching 20 passes for 588 yards and eight more scores.

Iowa, Baylor, Kansas State, Michigan, Nebraska and Tennessee were among the teams that offered Hall a scholarship. But with David Montgomery leaving early for the NFL, Hall saw an opportunity to play right away in Ames.

That didn't happen though.

Hall and fellow true freshman Jirehl Brock joined Johnnie Lang, Kene Nwangwu and Sheldon Croney Jr. on the depth chart — and all five of those running backs have played this fall.

But after his team had some early struggles against the Mountaineers, Campbell turned to Hall. Hall came through on 26 carries — a week after getting just one in a 49-24 win over TCU — and he scored twice from a yard out and once from 12 yards away.

With Hall leading the way — his longest gain was 18 yards — Iowa State outscored West Virginia 24-0 in the second half.

With "him being young and having more things he can get better at, it's scary," Iowa State senior receiver La'Michael Pettway said.

Campbell on Tuesday would not declare Hall his top running back. Hall was unavailable; Campbell does not allow true freshmen to speak with the media.

But if Hall can build off last week's momentum this week in practice, it's hard to imagine anyone else getting the bulk of the carries against the Red Raiders.

The Cyclones could sure use some clarity at running back too. Even with Hall's breakout game last week, they're just 76th nationally in rushing yards per game.

"I really mean this when I say it. You've got to earn it in practice," Campbell said. "We'll see how he responds."