The Latest: Louisville looks to rebuild under Satterfield 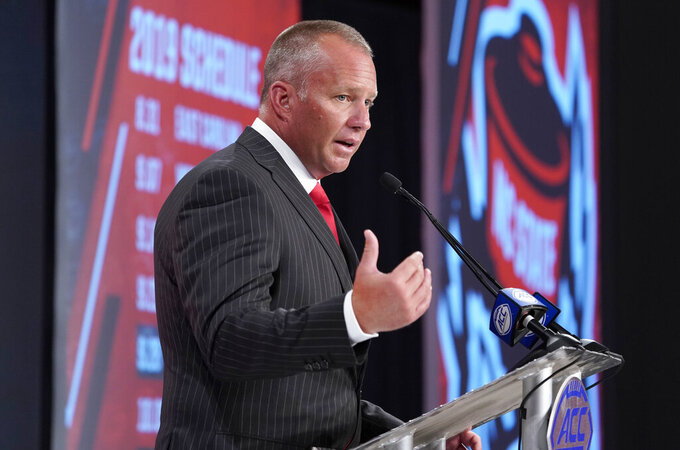 First-year coach Scott Satterfield says he won't measure Louisville's success this season in terms of wins and losses, but rather by if players are demonstrating the right attitude and giving their best effort on a daily basis.

He said Wednesday at ACC media days that in the long run daily effort is most important for the Cardinals' flailing football program.

Satterfield knows Louisville faces a long road back after going 2-10 overall and 0-8 in ACC play in 2018. They have question marks up and down the roster with no clear star players to build around.

The even-keeled Satterfield plans to lean on his success at establishing Appalachian State as a winner in his attempt to rebuild Louisville. He led the Mountaineers to four straight bowl wins and three conference championships before accepting the job at Louisville.

For the second straight year, Wake Forest coach Dave Clawson enters the season unsure of who'll be under center.

But unlike last year he has two quarterbacks with some college playing experience.

Sophomore Sam Hartman and redshirt junior Jamie Newman return from last year and will battle this summer for the job, Clawson says.

Hartman started nine games last season and threw for 1,984 yards and 16 touchdowns before a season-ending injury against Syracuse. Newman started the final four games and won three, including the Birmingham Bowl against Memphis to put himself in contention for the starting job.

One thing is for sure — the Demon Deacons will continue to play fast on offense.

Clawson said Wednesday at ACC media days that the goal isn't always to go "100 miles per hour," but rather having the threat of playing at different tempos to keep defenses off guard.

Devito replaces Eric Dungey, the school's all-time leading passer who helped put Syracuse football back on the map with a win over Clemson two years ago and a 10-win season in 2018 — the school's first in 17 years.

While Dungey was a dual-threat QB who was never shy about breaking out of the pocket and making plays with his feet, DeVito is a self-proclaimed pocket passer who says running the football "is not my first thought."

Babers says he thought long and hard about whether to bring DeVito to ACC media days given he's entering his first season as the starting quarterback. He eventually relented, saying "if the shoes are too big, then you need to grow up and fill them."

N.C. State coach Dave Doeren says he hasn't settled on a quarterback to replace three-year starter Ryan Finley, who was drafted in the fourth round by the Cincinnati Bengals in April.

Doeren is waiting to see which QB improves the most over the summer, gains the command of the offense and the trust of his teammates before making any type of a decision.

He said he has no timetable for naming a starter.

While Matt McKay would seem to have the inside track given he's been in the system for the last two seasons, Doeren says he doesn't want to sell the other competitors short and that he's "excited to see these guys compete."

Among the others who are expected to join McKay in the QB battle include the nation's No. 1 ranked junior college transfer Bailey Hockman, redshirt freshman Dennis Leary and true freshman Ty Evans. Doeren doesn't appear too worried, shrugging his shoulders when talking about the competition, saying "we have options."

Boston College coach Steve Addazio says after qualifying for a bowl game in five of the last six seasons the next logical goal for his program is winning the ACC championship.

He knows that won't be an easy task with four-time defending ACC champion and national champ Clemson in the same Atlantic division, but he's not backing down. Addazio says he's been around football long enough to know that "any team in college football is beatable," including the Tigers, who are 34-2 against ACC foes since 2015.

He says they key to beating Clemson is being able to consistently run the football and disrupt the Tigers' high-powered offense led by quarterback Trevor Lawrence and running back Travis Etienne.

The Eagles entered last year's game against Clemson with a 7-2 record and played the Tigers tough before falling 27-7 at home. He says the ability to challenge the Tigers will give his team confidence this season, even in a year where Boston College has replaced its offensive and defensive coordinators.

Florida State's second-year coach Willie Taggart says he's impressed with how well quarterback Alex Hornibrook has meshed his new teammates after joining the Seminoles as a graduate transfer from Wisconsin.

The Seminoles are looking to bounce back from a disappointing, if not embarrassing, 5-7 first season under Taggart and will rely heavily on Hornibrook to begin the process of returning the program to notoriety. Last year was Florida State's first non-bowl season since 1981.

Taggart pinned last year's issues offensively on players' struggles adapting to a spread offense, which differed from the pro-style offense they'd run in the past. He says he's already seen "tremendous improvement" in the execution of the team's offense in practice.

Taggart expects the Seminoles to "turn things around" this season behind Hornibrook, who has plenty of starting experience and was the MVP of the 2017 Orange Bowl. Hornibrook was 26-6 in three seasons at Wisconsin, throwing for 5,438 yards with 47 touchdowns and 33 interceptions.

The national champs sent a "stunt double" instead.

Offensive guard John Simpson, who will represent Clemson's offense at the annual media day, decided to wear a blonde wig to resembling the popular quarterback's signature hairstyle, knowing everyone would probably rather talk to Lawrence. The Tigers posted a video of Simpson trying on the wig on their football Twitter site.

While the 330-pound lineman may not look a whole lot like Lawrence, at least he's got the hair flip down.

The Tigers have won two of the past three national championships along with four straight league titles. Speaking during his annual forum to start the league media days, Swofford said Wednesday it's impossible to measure the impact of that success as the ACC Network prepares for its Aug. 22 launch.

Clemson's opener against Georgia Tech on Aug. 29 will be the channel's first football game.

The league needs the channel to close a growing financial gap with its power-conference peers.

The ACC's 14 full-time members for the 2016-17 season received $26.6 million with football driving the revenues, according to the league's federal tax filings. But the Southeastern Conference which launched its own ESPN-partnered channel in 2014 distributed nearly $41 million per school that year and while the Big Ten, Big 12 and Pac-12 all averaged more than $31 million.

The Atlantic Coast Conference opens its preseason media days Wednesday with a focus on reigning national champion Clemson and the rest of the Atlantic Division.

The Tigers have won two national championships in three seasons and four straight league titles while going 34-2 against ACC opponents dating to the 2015 season.

Syracuse is coming off a 10-win season, but there's plenty of uncertainty throughout the division. North Carolina State is the only league school with no starting experience at quarterback, while Florida State is coming off its first bowl-less season since 1981.

There's also a new coach in Louisville's Scott Satterfield, while Wake Forest and Boston College are both coming off seven-win seasons.

The two-day session concludes Thursday with the Coastal Division teams.