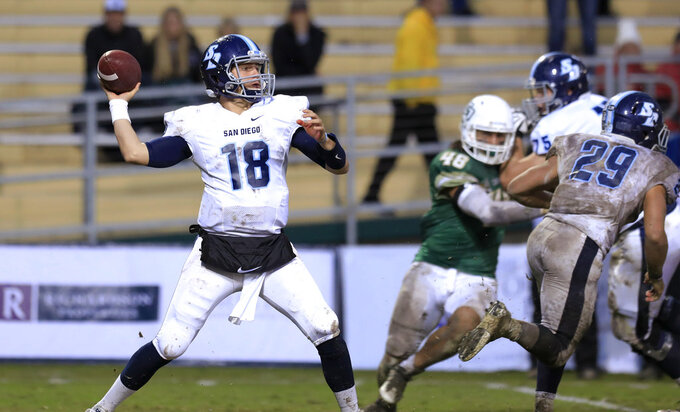 FILE - In this Nov. 26, 2016, file photo, San Diego quarterback Anthony Lawrence (18) looks for a receiver during the second quarter against Cal Poly in an NCAA FCS first-round playoff game in San Luis Obispo, Calif. The University of San Diego is in the FCS playoffs for the third straight year under 75-year-old coach Dale Lindsey and senior quarterback Anthony Lawrence. It's a terrific accomplishment, considering that the Toreros don't offer football schoarlships and it costs $65,426 a year to attend the small Catholic school known for its Spanish Renaissance architecture and a million-dollar view of Mission Bay and the Pacific Ocean. (Laura Dickinson/The Tribune (of San Luis Obispo) via AP, File) 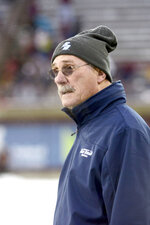 SAN DIEGO (AP) — The most successful college football team in Southern California this season doesn't play in a major conference.

It certainly doesn't play before tens of thousands of fans every Saturday. Heck, its stadium doesn't even seat 10,000.

Its 75-year-old coach, a former NFL middle linebacker and defensive coordinator, is collecting Social Security. The quarterback is an unassuming accounting major who has become one of the most prolific passers in Football Championship Subdivision history after being passed over by Football Bowl Subdivision teams.

That's how they roll at the University of San Diego, where coach Dale Lindsey and senior quarterback Anthony Lawrence have the Toreros in the FCS playoffs for the third straight season.

It's a terrific accomplishment, considering that the Toreros don't offer football scholarships and it costs approximately $65,000 a year to attend the small hilltop Catholic school known for its Spanish Renaissance architecture and a million-dollar view of Mission Bay and the Pacific Ocean.

"I think our program has advanced to the point where we have credibility on a national scale, at this level," athletic director Bill McGillis said after the Toreros (9-2) drew an opening-round matchup at Nicholls State (8-3) on Saturday. "In talking to members of the FCS committee and just people throughout college football, they now recognize us as a very successful, sound, national program."

USD has won its opening-round playoff game each of the last two years before losing at powerhouse North Dakota State.

Until the Toreros — it's Spanish for "bullfighters" — began routinely qualifying for the postseason, they were best known for being the first steppingstone in Jim Harbaugh's head coaching career. Harbaugh went 29-9 at USD from 2004-06, including winning league titles with consecutive 11-1 finishes. Back then, the Pioneer League didn't have an automatic FCS playoff berth.

When Ron Caragher left after the 2012 season, Lindsey was promoted from defensive coordinator to head coach. Lindsey punts all credit to his assistants and the players.

"We have been fortunate enough to have dedicated coaches that are here long after everybody's gone home, working," said Lindsey, who is 55-15 in six seasons. "We've been very successful in finding the right kind of guy that meets the academic requirements and athletic requirements to have a championship team. ... I just stand around and get out of the way."

After a decades-long career playing and coaching in the NFL, and then pivoting to college coaching, Lindsey isn't in a hurry to go anywhere

"I like what I do," he said. "Coaching was never a job. It's a hobby. I don't like to use the word 'work.' Work is something you go to that you don't like. This is something I go to that I like every day. I've been very fortunate ever since I was 22 that somebody paid me for my hobby."

Lawrence has enjoyed playing for Lindsey.

"He has a lot of fun out there. Even though he's serious, he makes a lot of jokes and has so much knowledge about the game," Lawrence said. "He puts us in incredible positions to win. He has zero scholarships and he puts us in position to beat those teams, so I don't think you can speak enough for his coaching ability and the affect he has on this group of guys."

USD is the only non-scholarship team in the 24-team bracket. Academic money is available, and Lindsey said the parents who help get their sons through school are the real strength of the program.

"We definitely play with a chip on our shoulder," said Lawrence, who played at suburban Grossmont High. "Most of us are underdogs and overlooked throughout high school and the recruiting process. We know we have the talent, we know we have the guys to go out and compete with anyone. The thing that gives us the edge is the underdog, chip on our shoulder mentality that these guys overlooked us, so let's show them why that was a mistake."

"We think we can make some noise this year," Lawrence said. Having lost in consecutive years to NDSU, which has won six championships in seven years, "we know what we need to do to be successful in the playoffs."

For one, they need to play better defense. USD allowed Davidson to rush for an FCS-record 789 yards two weeks ago. But Lawrence threw for a school-record 556 yards and seven touchdowns to rally USD to a 56-52 victory that clinched the Pioneer League title.

The Toreros then won at Marist to clinch their third straight undefeated Pioneer League schedule.

Lawrence moved into a tie for eighth place in FCS history with 116 career touchdown passes and became the all-time leader in USD history, passing Josh Johnson (2004-07). He moved up to 11th place all-time with 12,306 career yards passing.